This website is for an old version of the course, from 2016/17. Advances in Programming Languages has moved on to new years and new students. Please follow the link below to see the current course pages.

The APL exam is this afternoon, 1430–1630 in St Leonard’s Land Games Hall. Please use the entrance in Viewcraig Gardens.

The exam format is as in previous years: you have two hours to answer two out of three questions. Read all the questions before making your choice.
END_OF_DOCUMENT_TOKEN_TO_BE_REPLACED

Please fill out the short online feedback page for APL. This is organised centrally by the University, with all results sent to the individual course organiser and to the Director of Teaching. I read every comment individually, and for Informatics courses we post results online to help other students choosing courses for the future.

This was the final lecture for the course, directed in particular at visiting students who will be taking an exam shortly: with some general information on assessment practices, advice on exam technique, and specific details on the exam structure for this course. I also went through some example questions from previous exams, circulated earlier.
END_OF_DOCUMENT_TOKEN_TO_BE_REPLACED

Probabilistic Programming:
What is it and how to improve it?

END_OF_DOCUMENT_TOKEN_TO_BE_REPLACED

This afternoon’s lecture completed the review of Rust with an exploration of how references and ownership interact with threaded concurrency.
END_OF_DOCUMENT_TOKEN_TO_BE_REPLACED

Today’s lecture presented the core of Rust’s claim to provide safe systems programming: the use of move semantics, reference ownership and borrowing to provide precise and powerful memory-safe programming without runtime overhead. The features that provide this form a detailed deconstruction of what in other languages would be objects, but in Rust are carefully prised apart, each treated separately for their individual contribution. I also included a number of pictures of food to illustrate this.

END_OF_DOCUMENT_TOKEN_TO_BE_REPLACED

I’m going to count this as course-relevant news. Barack Obama has announced this year’s recipients of the Presidential Medal of Freedom. Two of those recognised are for their work on advancing computer science: Grace Hopper and Margaret Hamilton.

Bill and Melinda Gates are in there, too, but that’s for the philanthropic work of the Gates Foundation rather than anything specifically related to computing or programming languages. 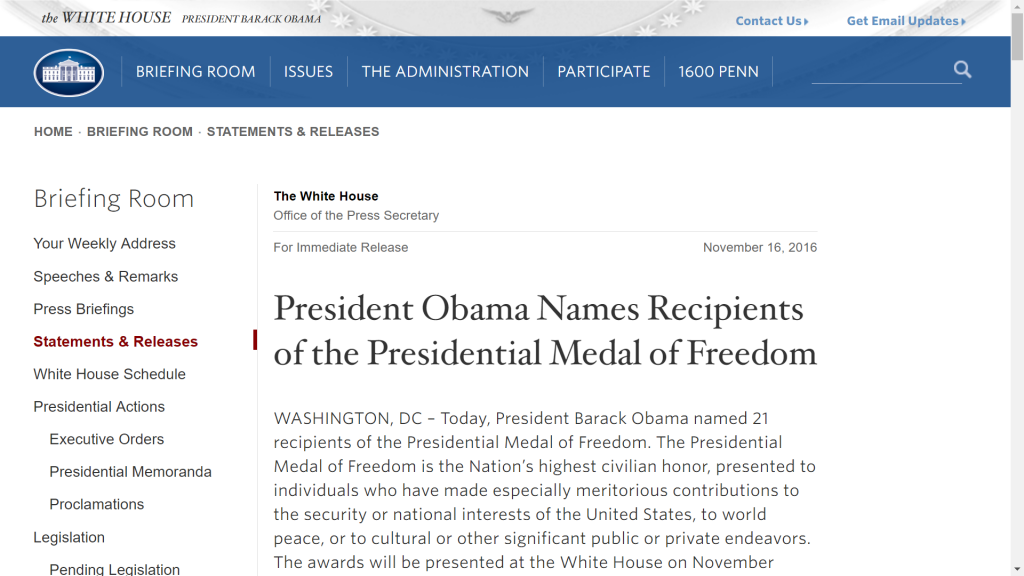 Facebook’s main website, ads platform, and much of its internal tooling is implemented in PHP, a language not known for elegance or best practice in programming language design. (See http://phpsadness.com, for example.) Over the last three years Facebook has embarked on an ambitious project to migrate its code base to Hack, which takes the syntax of PHP, removes the worst features, and adds static typing and modern constructs for asynchronous programming and typed UI components. In this talk I will focus on Hack’s type system, which combines ML-like type inference, object-oriented generics in the style of C# or Java, and flow-based typing of local variables.

Andrew Kennedy is a software engineer at Facebook London working on the Hack team. Before joining Facebook in January this year he spent 16 years at Microsoft Research, during which time he helped design and implement the generics feature for the .NET Common Language Runtime and polymorphic units-of-measure inference for the F# programming language, in addition to making many research contributions in type systems, semantics, formal verification and compilation.

These are the links I gave at the close of yesterday’s lecture: two APL-related things that came up last week and I think interesting to look at.

This is a project out of the FLINT group at Yale, building large verified systems. CertiKOS is a toolkit for building operating system kernels, hypervisors, and embedded systems. It’s part of the DeepSpec initiative and linked to DARPA HACMS and SAFE.

This is a talk by Brian Goetz at the Devoxx 2016 conference in Antwerp last week. He’s “Java Language Architect” at Oracle, and has been involved in a lot of the advances in the Java language over the last ten years. In the presentation he talks about some ideas that are under development to be part of the language in a year or two.

Advances in Programming Languages is a taught course for undergraduates and MSc students at the University of Edinburgh.

The first code ever to run on a stored-program digital computer. It ran on 21 June 1948 on the Manchester Small-Scale Experimental Machine or “Baby”, and calculates the highest proper factor of any input number. The panoramic photograph at the top of the page illustrates part of the machine.
Link: Birth of the Baby
Credits: Images courtesy of the School of Computer Science at The University of Manchester.