I was given an amusing and very appropriate congratulations card when I got news of being awarded my MSc with Distinction in e-Learning from the Moray House School of Education at the University of Edinburgh this weekend. It seemed very appropriate since I quoted Plato as an early advocate of experiential and simulation based learning in my MSc dissertation, and I was covering work on game-based learning for scenario-orientated training. The “off the mark” card artist is Mark Parisi. 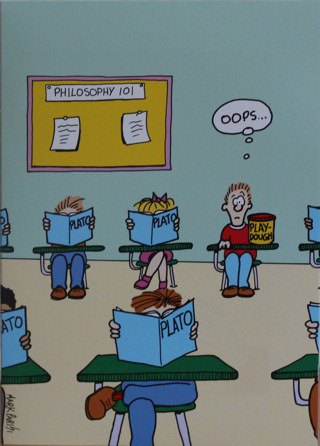 In that I said:

The use of simulations and gaming in a social setting for learning is not a new trend. Plato (360 B.C.) shows an early advocacy of experiential learning through games and observational experiences. Erikson’s (1977, chapter 1, p.17) “Toys and Reasons” summarises this well:

“Of all the formulations of play, the briefest and the best is to be found in Plato’s Laws. He sees the model of true playfulness in the need of all young creatures, animal and human, to leap. To truly leap, you must learn how to use the ground as a springboard, and how to land resiliently and safely. It means to test the leeway allowed by given limits; to outdo and yet not escape gravity.”

I discovered other related Plato quotations through Tom Malone’s (1981) work on intrinsic motivational aspects of computer games and simulations for education:

“…knowledge which is acquired under compulsion obtains no hold on the mind.

…do not use compulsion, but let early education be a sort of amusement; you will then be better able to find out the natural bent.

…children, too, were to be taken to see the battle on horseback; and that if there were no danger they were to be brought close up and, like young hounds, have a taste of blood given them.”

Erikson, E.H. (1977) “Toys and Reasons: Stages in the Ritualization of Experience”,
W.W.Horton.

This entry was posted in IDGBL and tagged MSc, Plato. Bookmark the permalink.