I have just about recovered from attending a two day international conference with 10 hours of activity each day and approx. 360 participants (150 peak – as reported at the OpenSim Dev Weekly meeting on 10th September 2013). There was so much going on your head could swirl… and all done without leaving my home office. The future of conferencing I have long anticipated is “almost” +++ here… see final section. 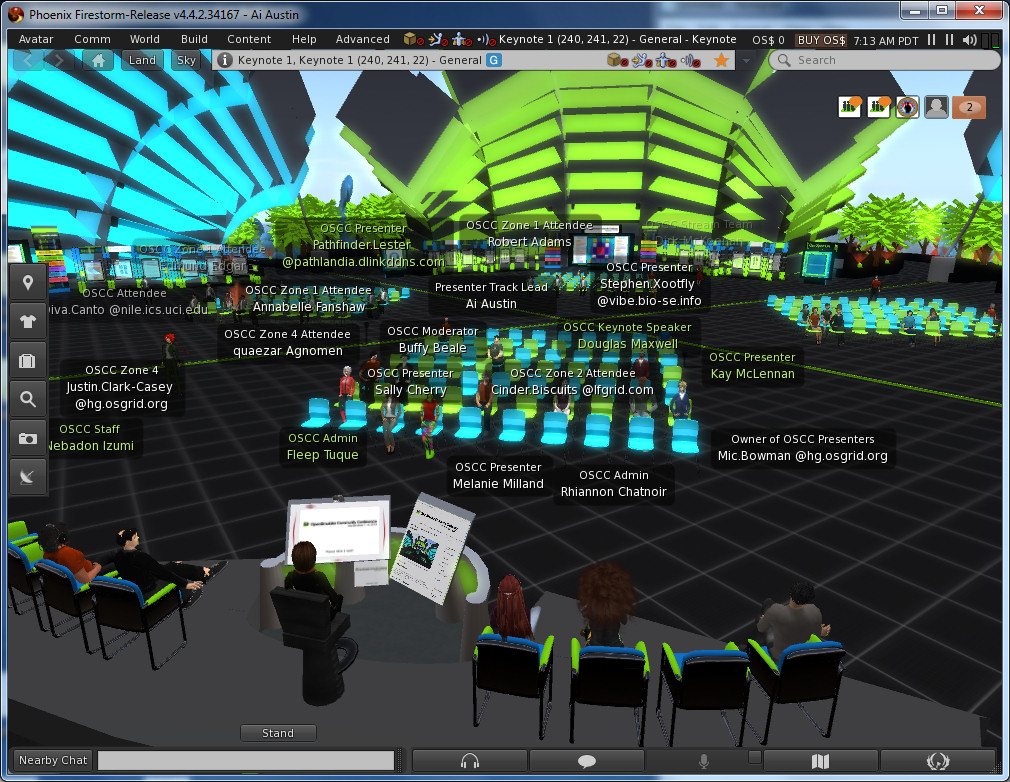 This is one of the best conferences I have been to… and that is a LOT of conferences. This feels like a real coming together for the OpenSimulator community and a maturation of the OpenSim platform WAY beyond its alpha status (you know who I am speaking to 🙂 ).

I thought I would jot down some notes on my experience while they were fresh in my mind, and I will add to this when the dust settles.

I found that I needed to be in two (or three) places at the same time, and it worked well if I could place avatars in those places, let the world fully load and settle down, and get my technical facilities all set for my role (as speaker, audience member, etc) and even set the outfit or appearance I would adopt for that role. As a member of staff for the conference and track leader I was able to dip in with a second avatar where areas were not maxed out. But we had full registration for in world access so that was not an option for many. It would be good to find a way to have a more dynamic ticket and attendance mechanism, so people could see available places and go along where spaces were open. A single avatar registered for the whole two days limited in numbers by the largest peak attendance at a keynote does not really allow for the sort of flexibility a virtual event could offer in future.

The ability to be in “multiple places at once” is something we just cannot do in a real event… hey.. I have even been to an IJCAI conference in LA where, even though I paid a large conference fee, I could not get into pretty much ANY session as there were queues out of the door for those sessions you wanted to attend. You ended up wasting valuable and expensive time being there early and queuing (Disney style). None of that in our virtual conference… not even walking time with the teleport signs everywhere.

We do need our intelligent agents and assistants to really watch these session for us and act as our “personal conference director” to draw our live attention to those things we need. I might take a look at that as a student project!

Meals were a problem.. real meals… there was so much going on, even the breaks were filled with product announcements and meet ups. I found a planned (real family) dinner got squeezed to 20 minutes. Maybe we just have to realize that, as at a physical conference, you really just cannot attend all of the many things you wish to… and leave some for catchup later using session recordings.

Sitting still so long on a weekend is something we need to address, and I suggest next time we have a jogging track and sports area, and make it so we get everyone to do REAL exercises together along with a motivational inworld fitness trainer… no sitting down when dancing too in future! Actually, those are serious suggestions for future virtual events.

We need an area where people can go to prepare objects for their presentations (like poster displays or items that need build permissions). I was not comfortable building inside the neat and tidy real conference areas, even though I had permission to do so. I found unused areas in the Expo zones to do the work. But a specific clearly signposted Sandbox area available to all, including normal attendees, would be helpful I think.

We expect to gather feedback from attendees and from developers for the event, and I note here some things I spotted.

The speakers used Skype broadcast via a UStream audio channel to feed into the virtual world space to the main audience. This was done of course because using inworld (e.g. Vivox) voice would not necessarily work at high numbers of simultaneous avatars in plenary sessions, and the costs would be high for such numbers. There was a bit of a disconnect between a speaker and the audience I found, and it was disconcerting for the normal attendees to not have any lip sync for the speaker avatar inworld. As a speaker I also found that I mostly was focused on my slides and moving forward through them, rather than watching the audience (basic training for presenters), seeing reactions, looking for hands being raised or gestures, or even watching the nearby text chat or IM streams. Some thought on how to do simple avatar mouth and hand motion animation while the audio channel was on – and giving a clear indication inworld that the audio stream is live in other ways – would be useful in future. 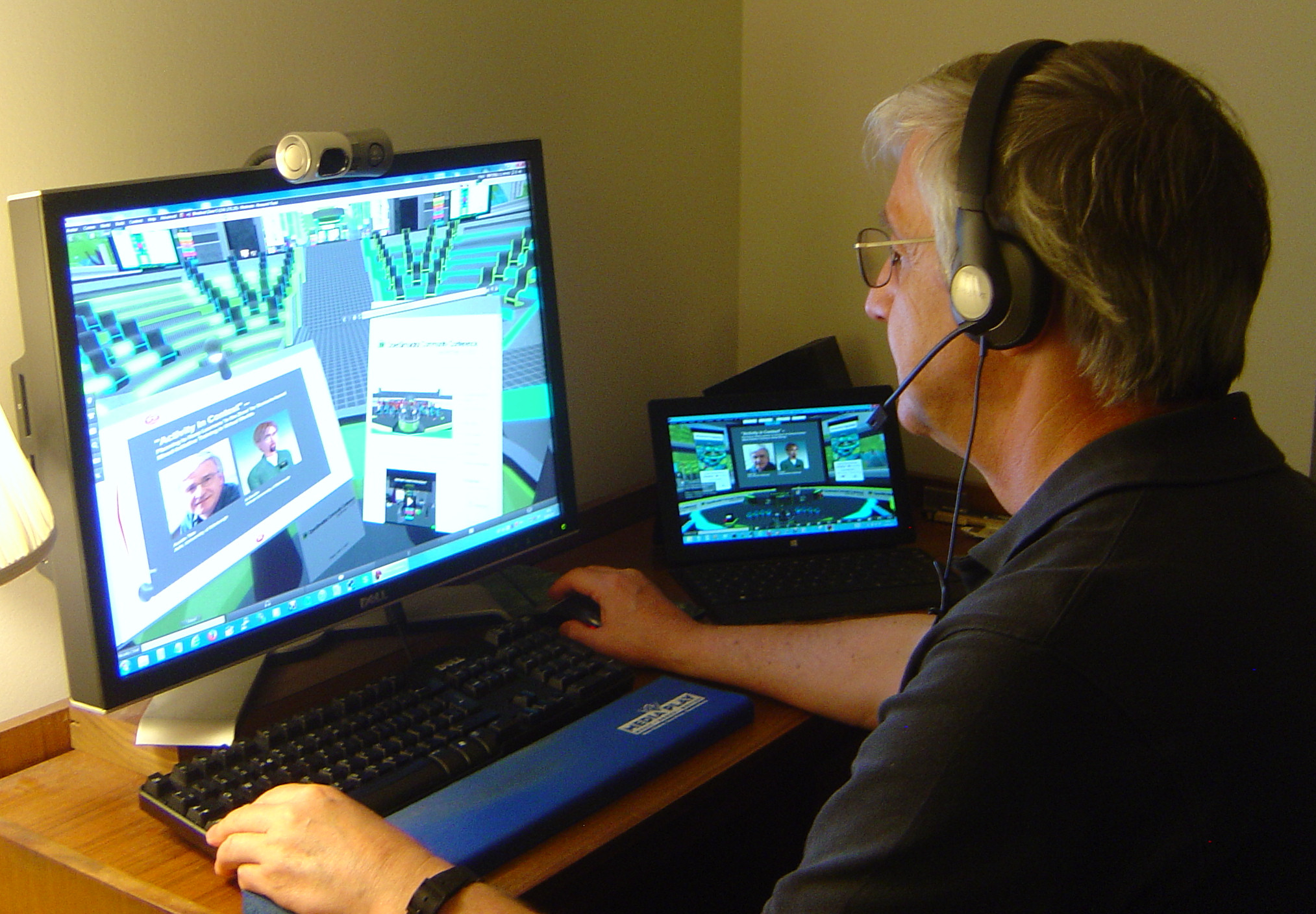 A set of relevant animations like clapping and raising hands, etc should be available. In fact they are in the OpenSim standard library, but not activated by default. And the inbuilt ones animate the activity, but did not seem to have clapping sounds attached. These sorts of social and feedback things make for a more immersive event – even include cheering and booing perhaps 🙂

The focus on generating a stable and usable version of OpenSim suitable for so many attendees was a spur to testing and fixing a number of glitches, and some 1000 commits were made by developers in the months ahead of the conference. 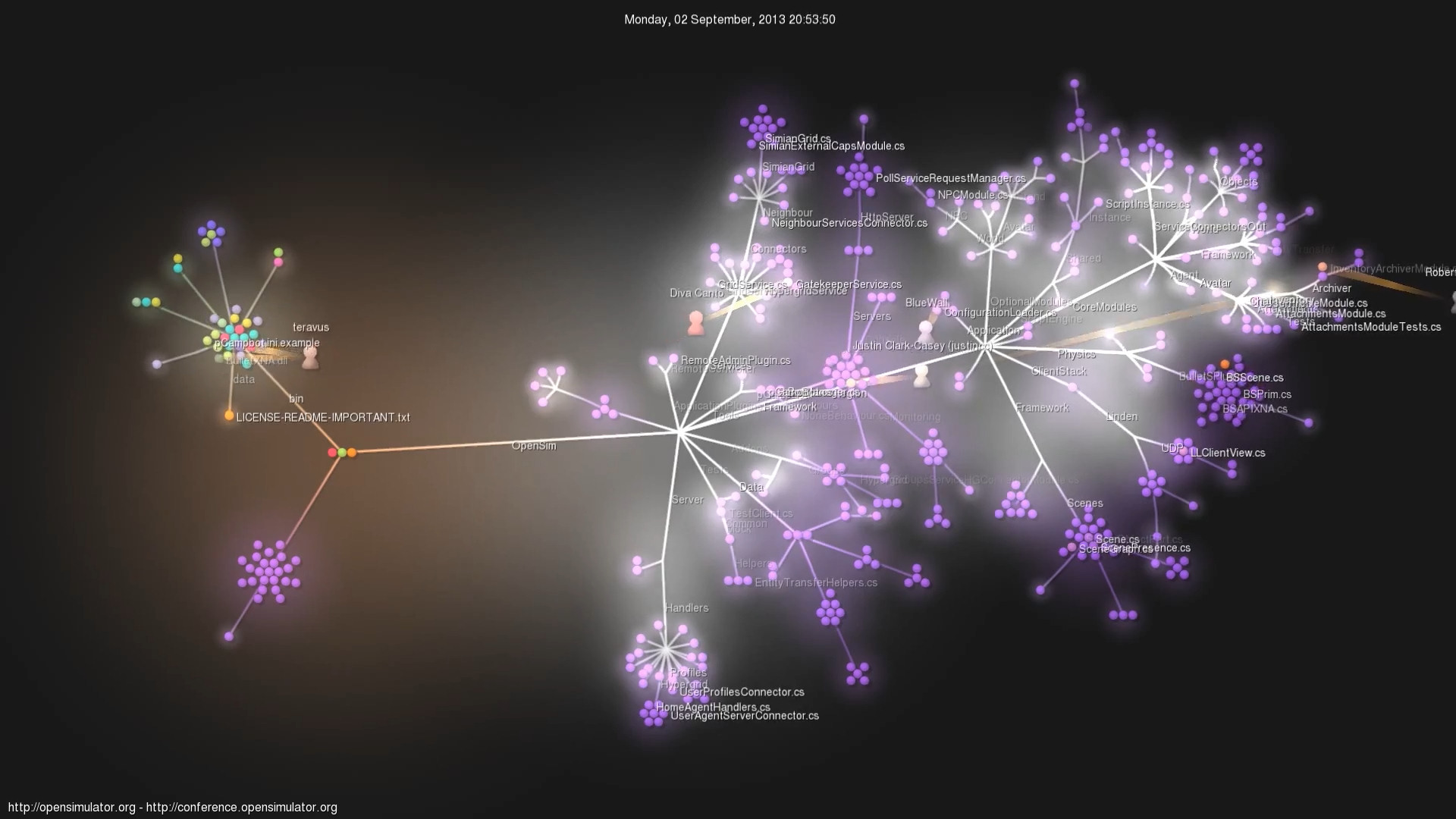 What I really think will be the future of international conferencing is all of what happened at OSCC13, with the majority of people attending virtually, and with multiple points of presence through a number of avatars, live streaming of the event and recording of sessions for later playback and use… but also alongside a real physical space or spaces for some of the participants (maybe some panels, keynotes or music venues). One idea might be to link up to a number of venues for some elements such as a panel or keynote speaker with a small audience round them and a big screen and live feed to act a two way conduit with the virtual audience.

—–
Crista Lopes of UC Irvine (avatar Diva Canto) has also blogged about her experience of this conference at http://tagide.com/blog/2013/09/the-future-of-conferences/

Some figures for attendance at OSCC13 were:

Since our initial goal was to reach 250 in-world attendees and as many streaming viewers as we could accommodate, the final tally was very satisfying.

6 Responses to Experience of Attending OSCC13