[At 3rd June 2014: This blog post is private and created for future visibility. It will only be opened once the alpha test phase is passed.]

After intial tests on the sandbox and alpha regions on HiFi, Ai Austin was allocated a plot on “The Strip” – an area on the hifi://alpha.highfdelity.io domain where persistence of builds is available for HiFi alpha testers.

This region can be reached via a HiFi URL with format hifi://domain/location/orientation:

Note that “Y” is up. I have given the location a convenient name (only cached in a single instance of the “Interface”) – “strip”.

When I initially logged on the area looked completely blank… I notice that “Servers: 0” were allocated to the domain/location… voxel building did seem to work in a test though voxels were slow to rezz and seemed to drop out and come back. 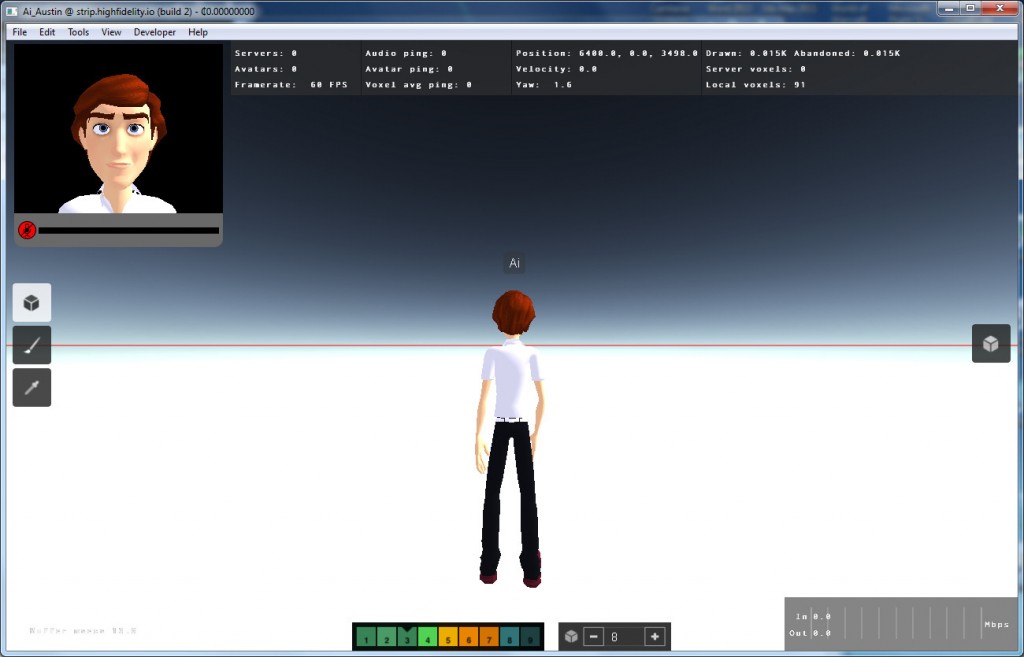 After moving to a different domain (alpha.highfidelity.io) I then saw 8 servers allocated and other alpha testers’ builds around me. 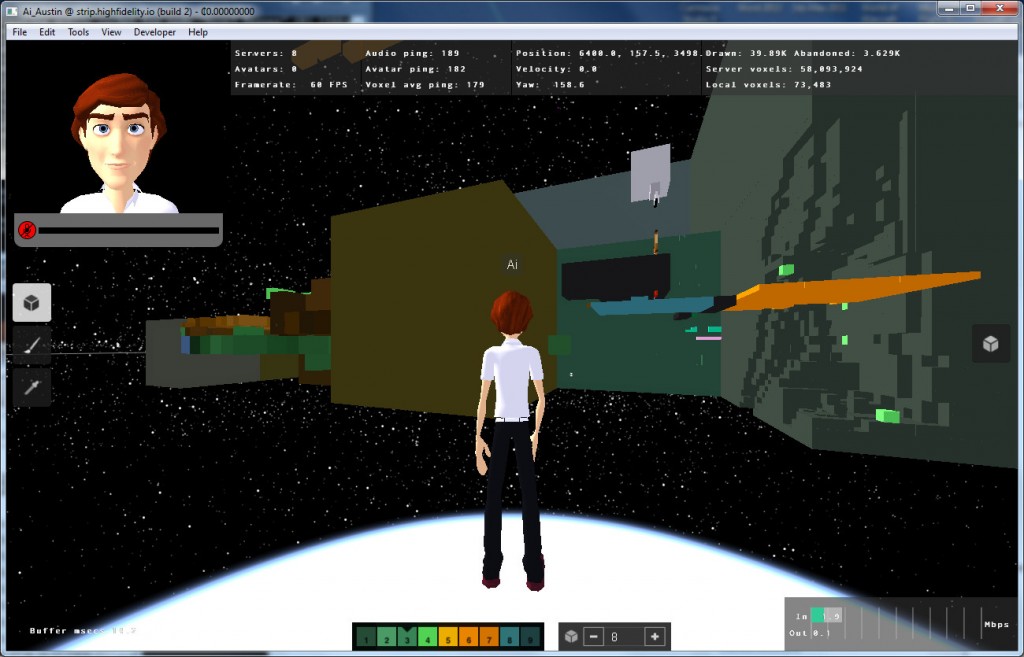 I was using a non-existent domain hifi://strip.highfideliy.io wrongly. The problem seems to be that a user might be misled into thinking they are in a live environment and working normally if they were in the “Servers: 0” situation. The “0” and “8” server screens are essentially the same appearance if no other buildings are round you, and it’s even worse if you don’t have the stats bar (toggled with “/”) showing. Even an arbitrary domain name like hifi://rubbish.highfidedelity.io works and it looks like its functional. You can build and delete voxels here… though they will not persist of course… you can even bookmark and name that location and “go to location” to it again later! Here is a snap on the non-existent “hifi://rubbish.highfidelity.io domain… 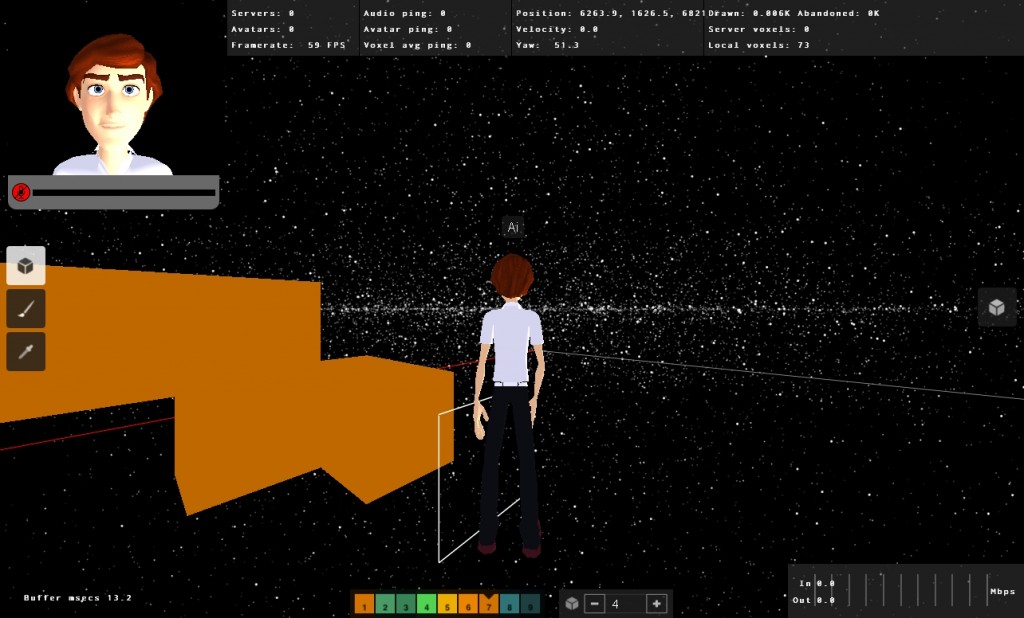 Plot Boundaries and Builds/Modifications Off the Plot

I placed magenta pillars roughly at the four corners of the plot to allow me to build in the area allocated. 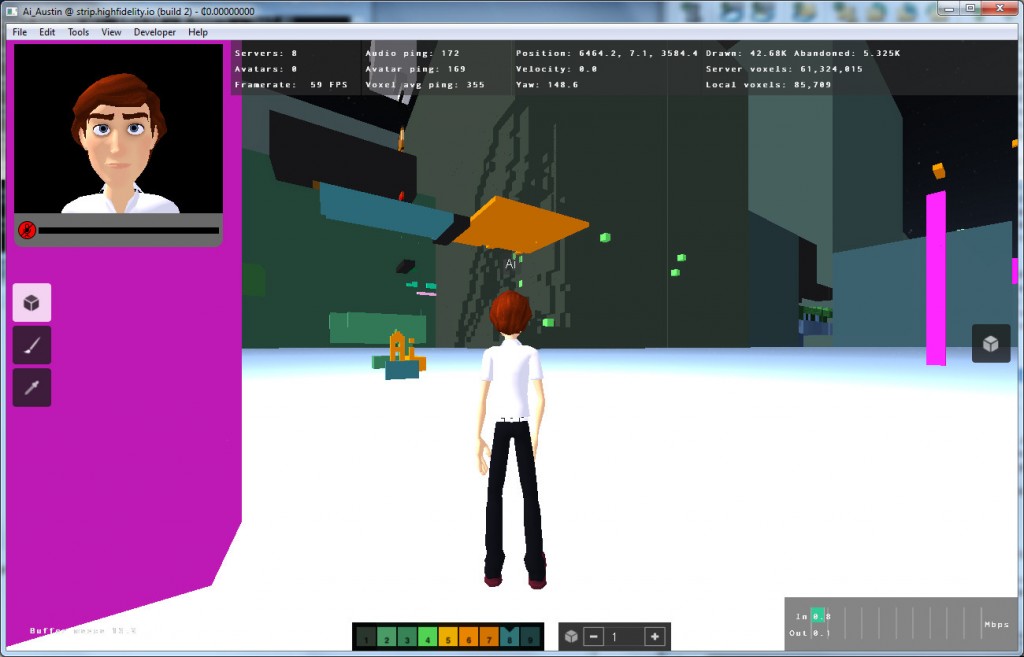 But I found that I could add voxels (e.g. the magenta “Ai” shape on a green base) off the plot. I could also edit (e.g. delete voxels) in builds off my plot. 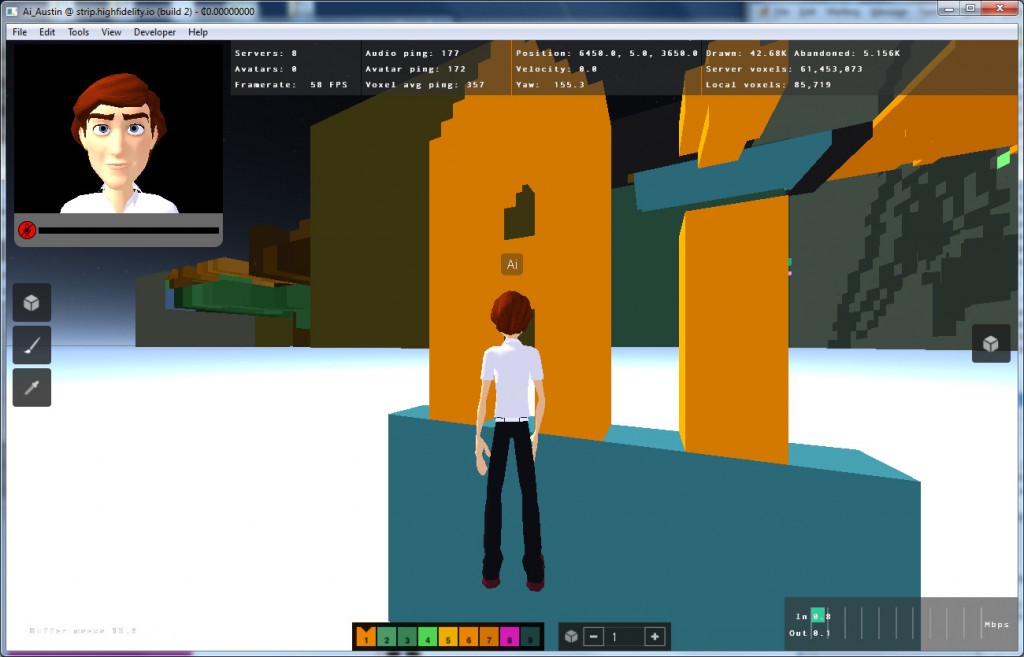 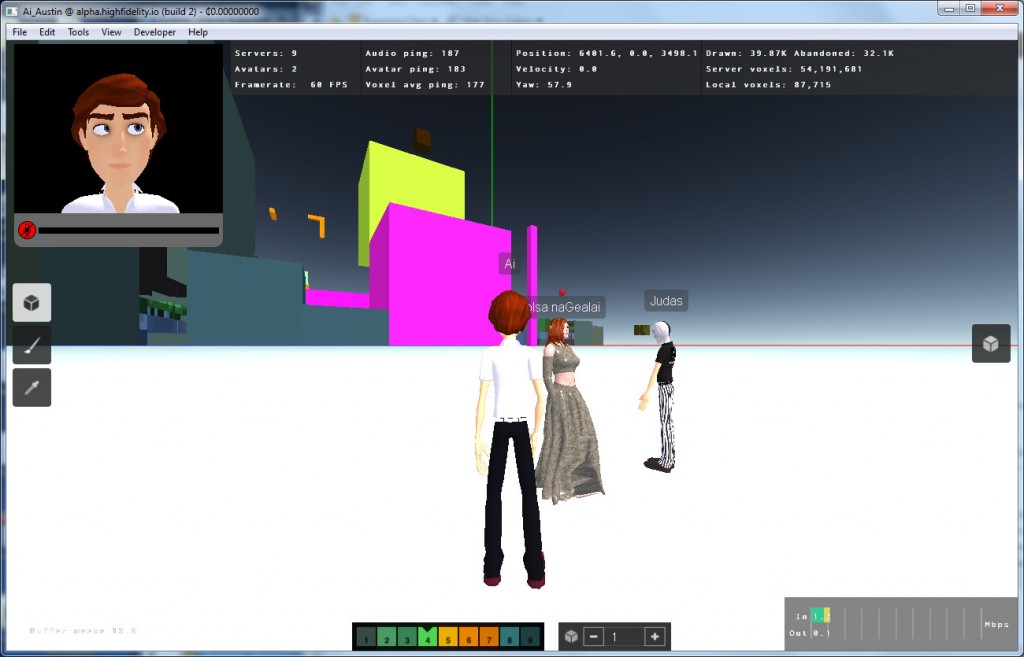 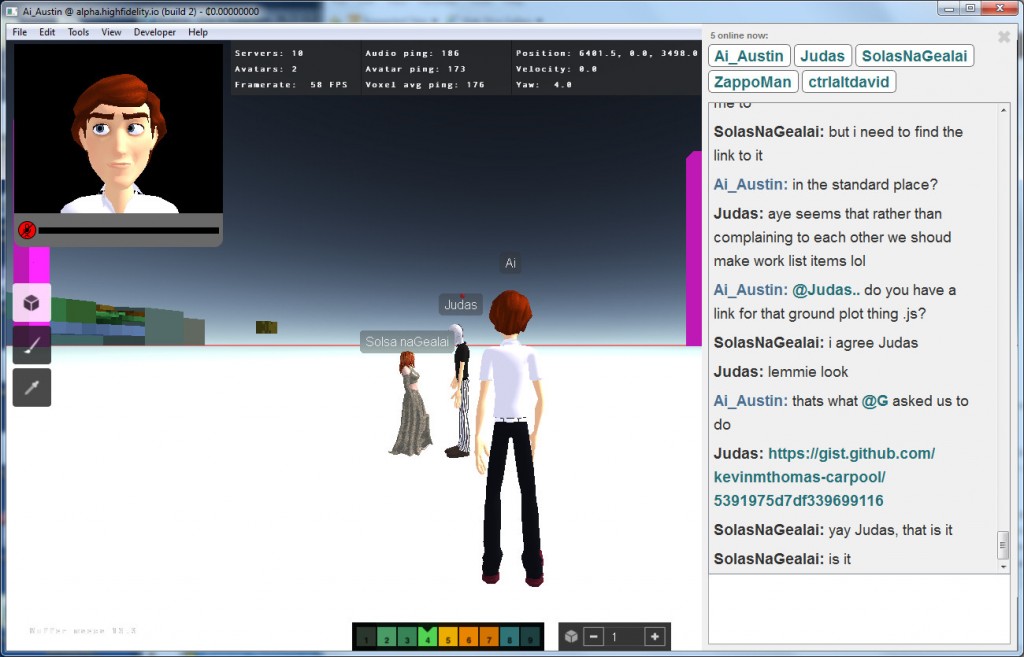 @Judas pointed me at a script by @KevinMThomas which places a green “grass” floor plan over your plot if you modify the parameters in the script for your own plot position and dimensions. It is at
https://gist.github.com/kevinmthomas-carpool/5391975d7df339699116
Take care as it could zap other people’s builds. To get a 1.0m plane at ground level set y=0. 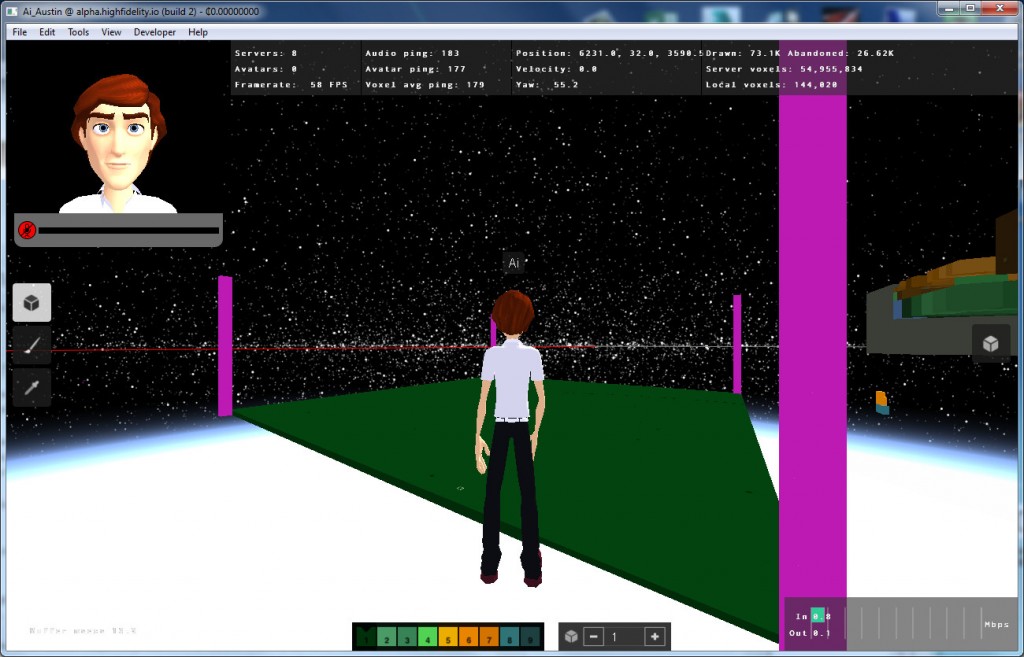 This test uses the Blender Supercar model exported to FBX format using Blender 2.71 testbuild2 (late May 2014) as that has various FBX fixes. The FBX was placed at http://vue.ed.ac.uk/hifi/fbx/supercar/supercar.fbx (may be only temporarily available) along with the various texture files. There were some unfound texture files (copies of some instrument face textures – rev meter, fuel meter, tracker gauge – probably due to earlier modelling errors that split the face faces of the gauges) which were replaced with copies with the expected names. First image has shadow rendering on (Windows build 686) so voxels don’t show due to a bug, second is without shadows showing the voxels in the region. 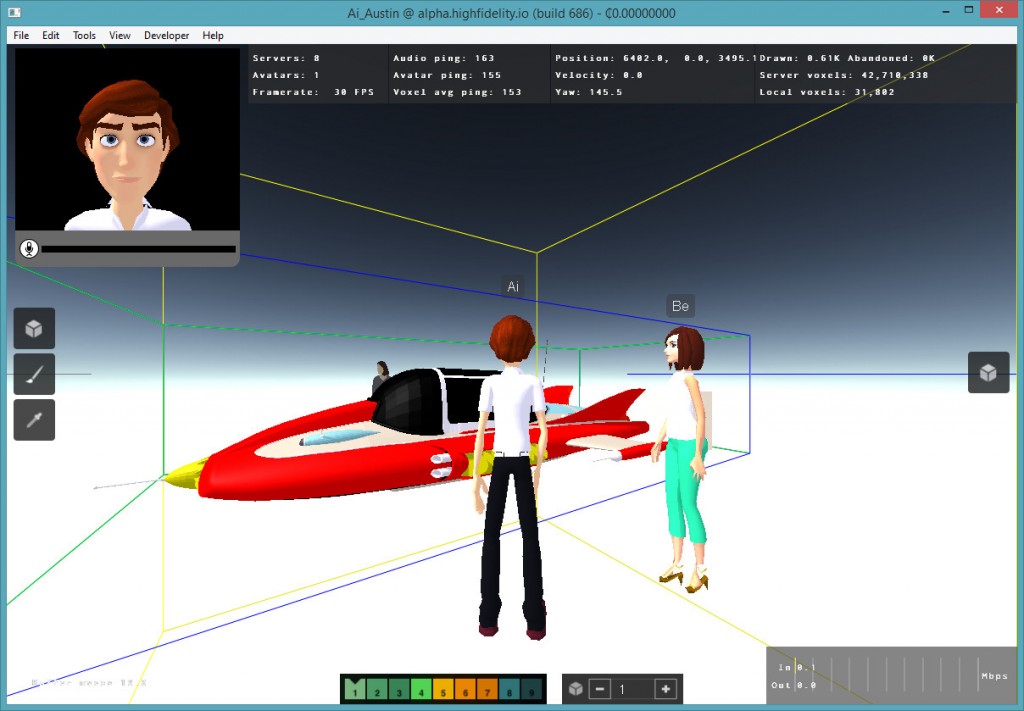 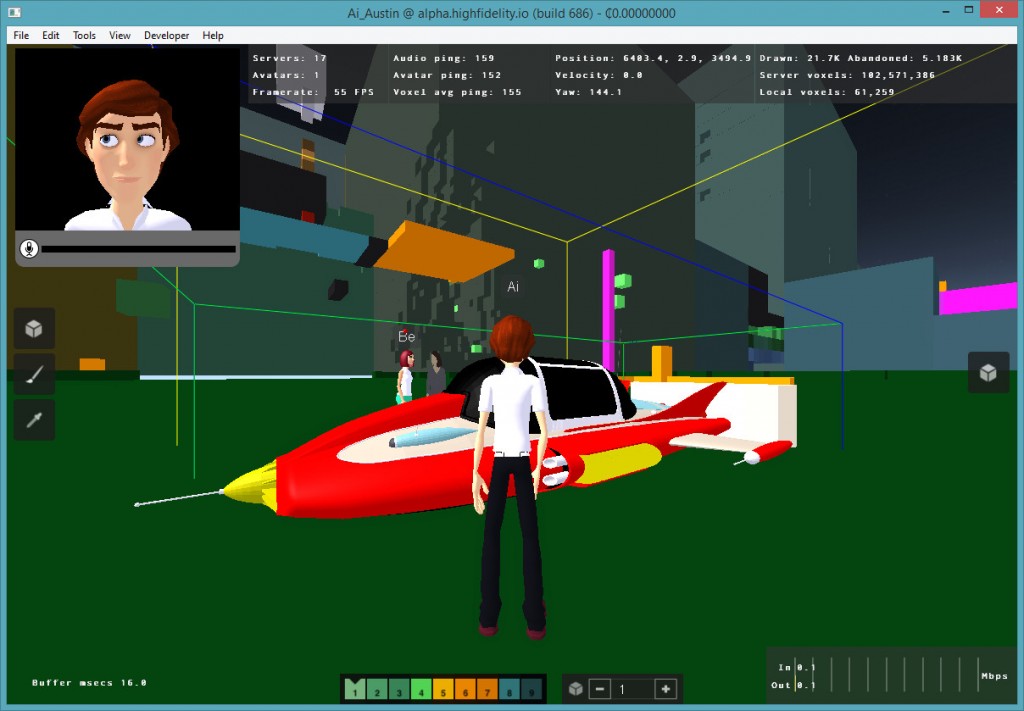 A fix for the Visage license issue has been issued by deleting a specific file (C:\Windows\chr2um34.sys) and doing a first run of the Interface as administrator. A later fix from Visage is anticipated to tidy up a broken install automatically. 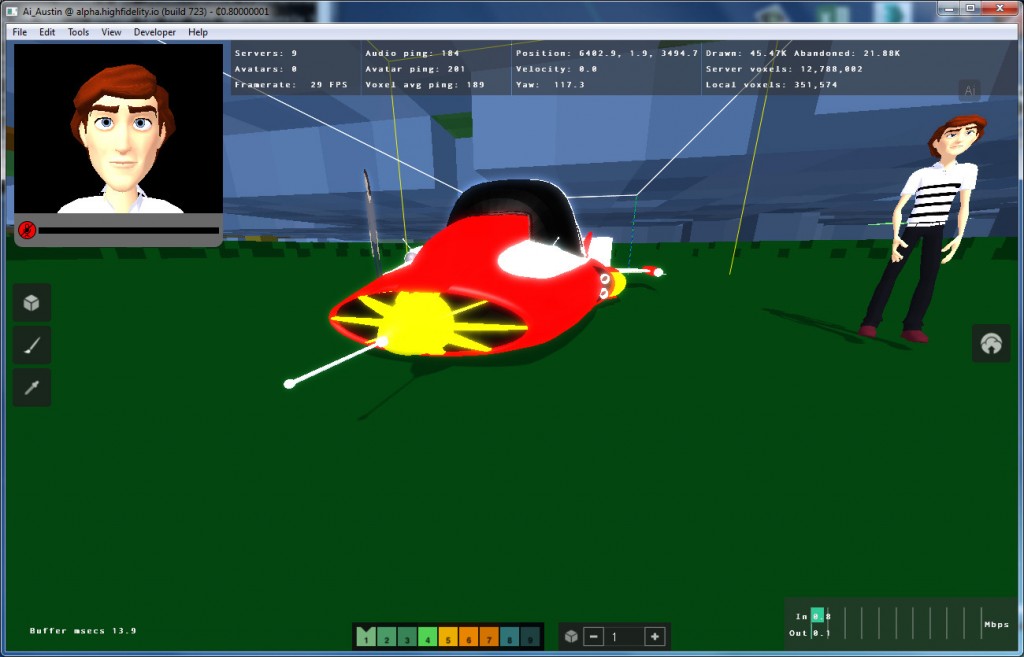 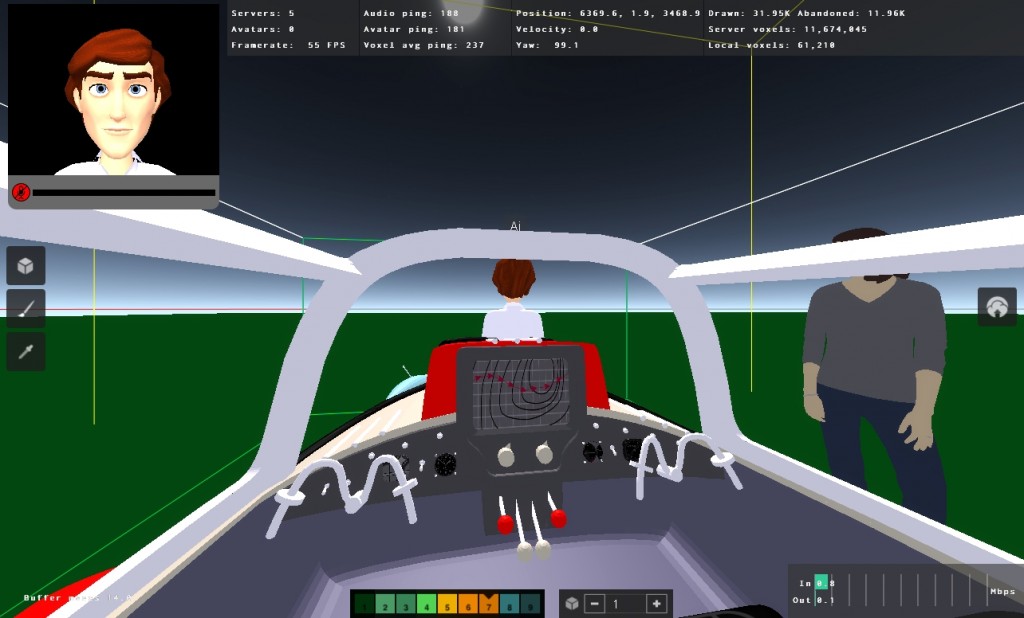