OSGrid is used by many as a freely accessible grid run by some of those involved in OpenSimulator development onto which locally hosted regions can be added. While the main Virtual University of Edinburgh facilities are in Second Life (region “Vue” and others nearby) and on the OpenSim-based Openvue grid, I have a number of Virtual University of Edinburgh, hobby topic and experiment related regions added on OSGrid and run on Edinburgh hosts. But OSGrid had a major asset server malfunction in late August 2014 and is taking some time to recover [Update: OSGrid was back up with assets restored on 12th March 2015].

My OSGrid add-on regions are all backed up to OpenSim Archive (OAR) files, and the OSGrid avatars have their inventory backed up as Inventory Archive (IAR) files. To maintain future robustness and offer a recover route after OSGrid is back up if necessary, I have built a new OpenSim grid called “AiLand” (pronounced “island”) hosted on an old Windows server updated to Windows 8.1 and with MySQL 5.6 installed.

AiLand residents are avatars involved in creating and managing the various regions. Temporary connection of experimental regions which may not persist is anticipated. Ailand is open for HyperGrid visitors (suggest heading for the welcome and portal region which is also named “AiLand) and is hosted at Login URI http://ai.vue.ed.ac.uk:8002/

The OpenSim 0.8.1 development configuration (initially r/25290) is based on the operational Edinburgh hosted “Openvue” grid [see blog post here] with the config-include/GridCommon.ini, Robust.HG.ini and OpenSim.ini files suitably modified. A few minor cosmetic changes to the Wifi web page headers and links were also made. 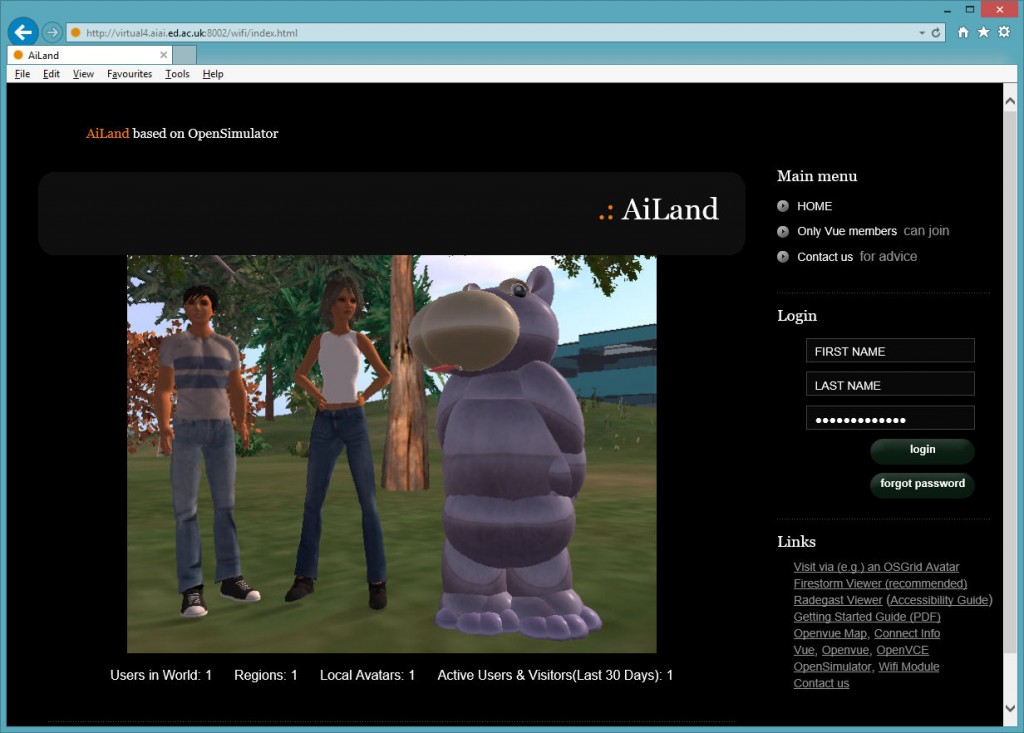 The administrator avatar is “Ai Austin” and the welcome and Hypergrid visitor fallback region is called “AiLand” located on the grid map at 1000,1000. This is the image on first entry as the default “Ruth” avatar. Then another image after all initialisation avatars (Ruth, Male, Female, Hippo, and Lizard Mesh) had been created and a telehub placed so that all avatars can set their “Home” location on AiLand. Ai Austin is now also in his usual Flight Suit… 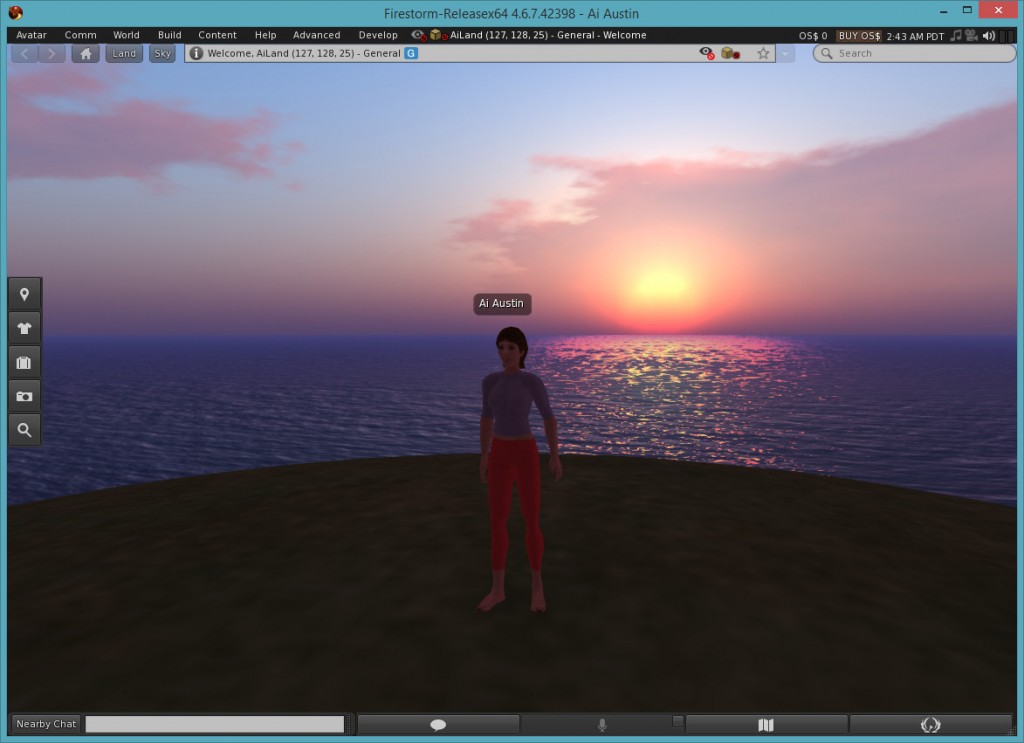 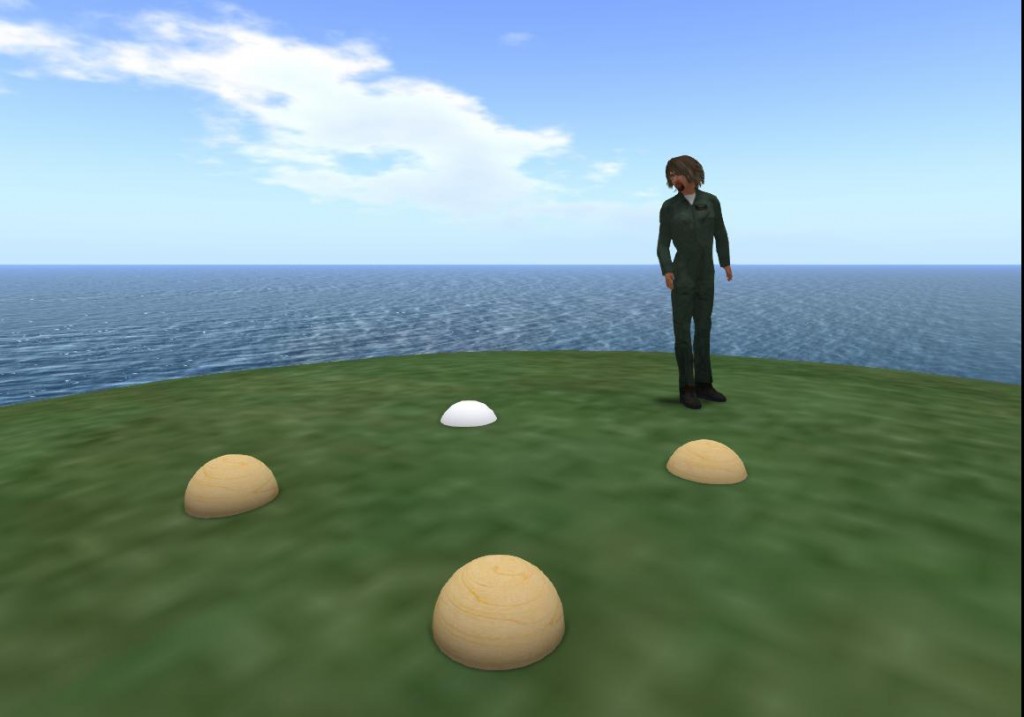 The AiLand regions have many mesh objects on them. They show best with “LOD Factor” (RenderVolumeLODFactor) set to around 3.5 rather than the lower default. Change this in any viewer via the Advanced menu (enable with ctrl+alt+D), Show Debug Settings, type in RenderVolumeLODFactor and set that to 3.5. In Firestorm, you can also use the “Quick Preferences” to set “LOD Factor” to 3.5 or go via Preferences – Graphics – Advanced Settings – Objects & Sculpts LOD – Set to 3.5. In Singularity the “Object Detail” does the same thing and should be set likewise to 3.5.

The usual Openvue style simple welcome area and teleport facilities, along with the racks of assets and avatars has been restored on the “AiLand” region… 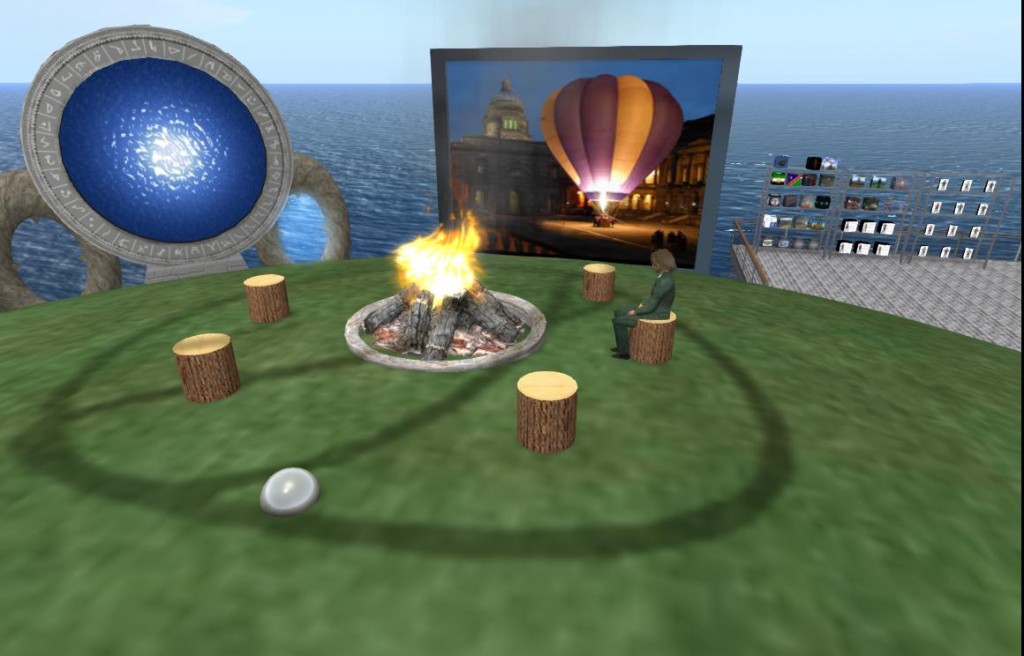 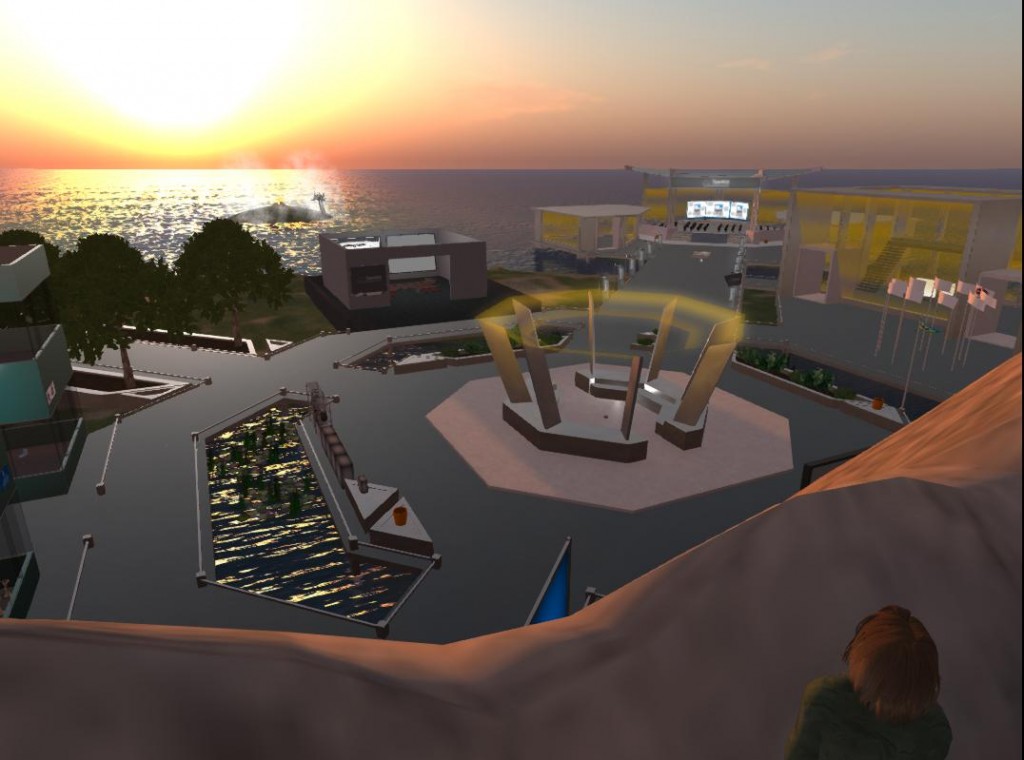 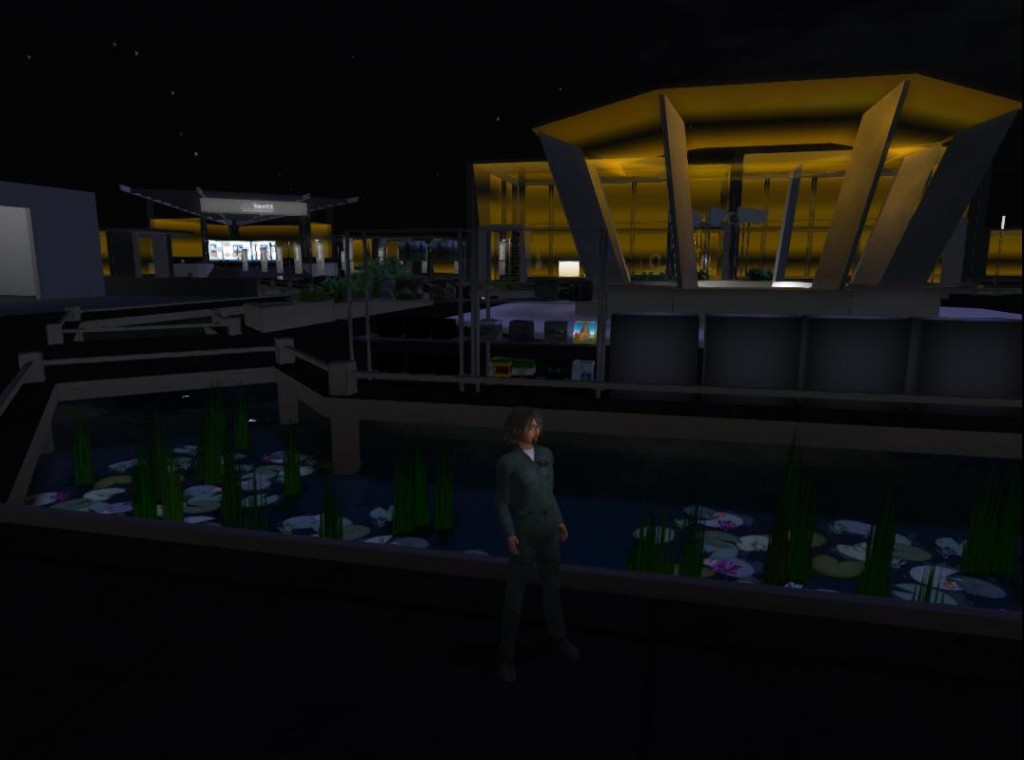 The OpenVCE community has provided openly accessible virtual worlds assets that can be used to provide collaboration spaces and presentation facilities in OpenSim and Second Life. This is the region as used on OpenSim grids such as Openvue and MOSES. 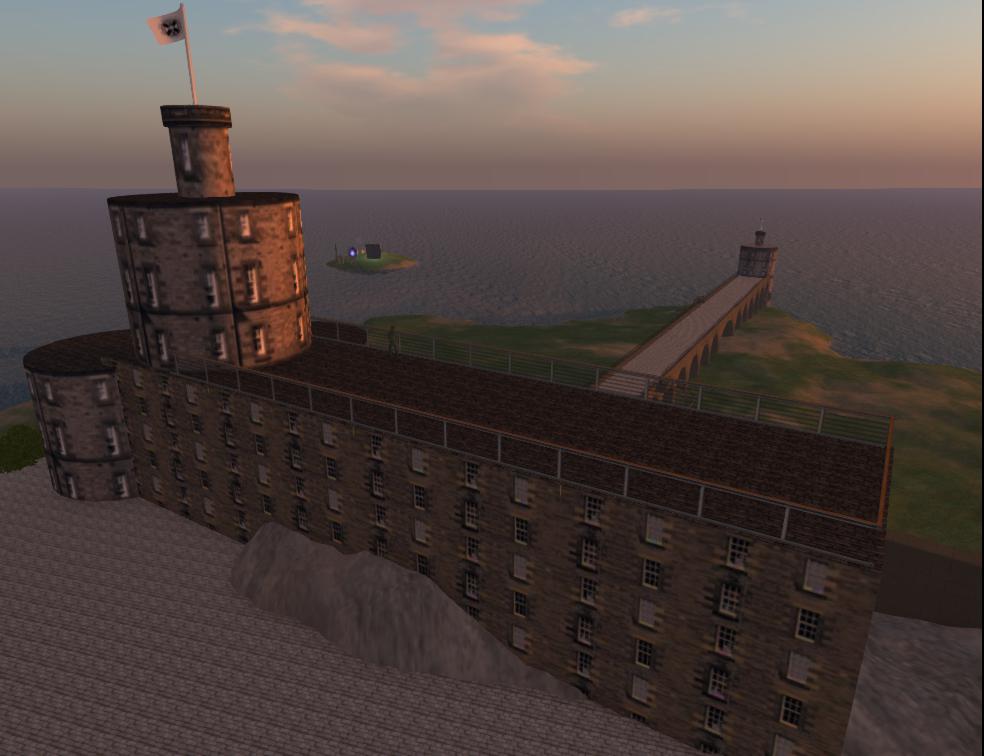 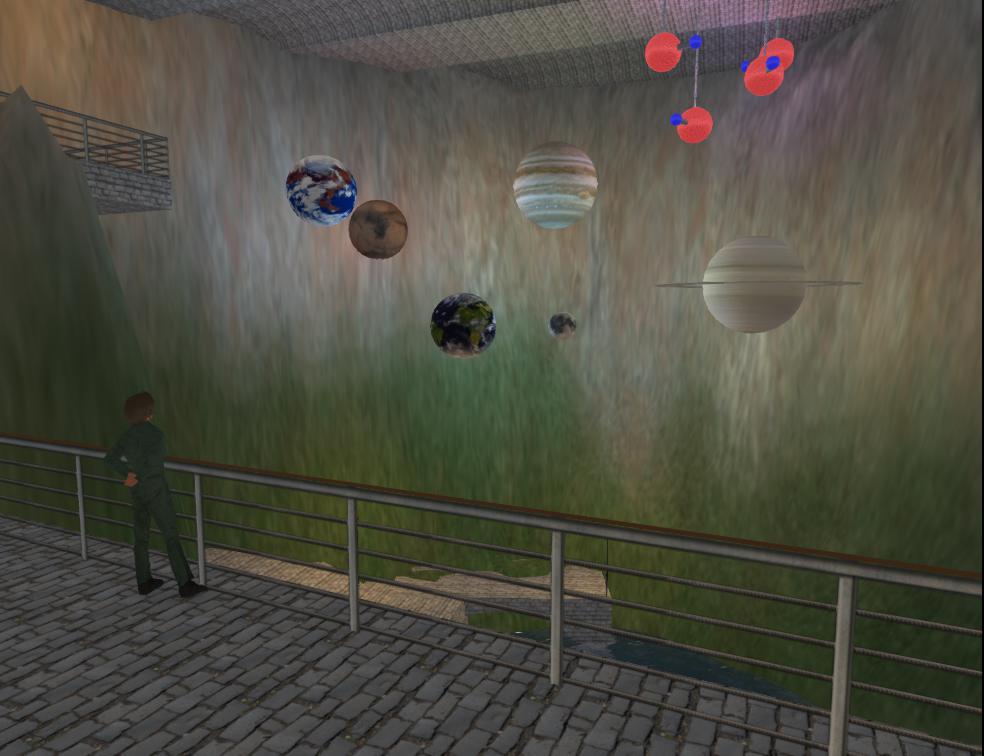 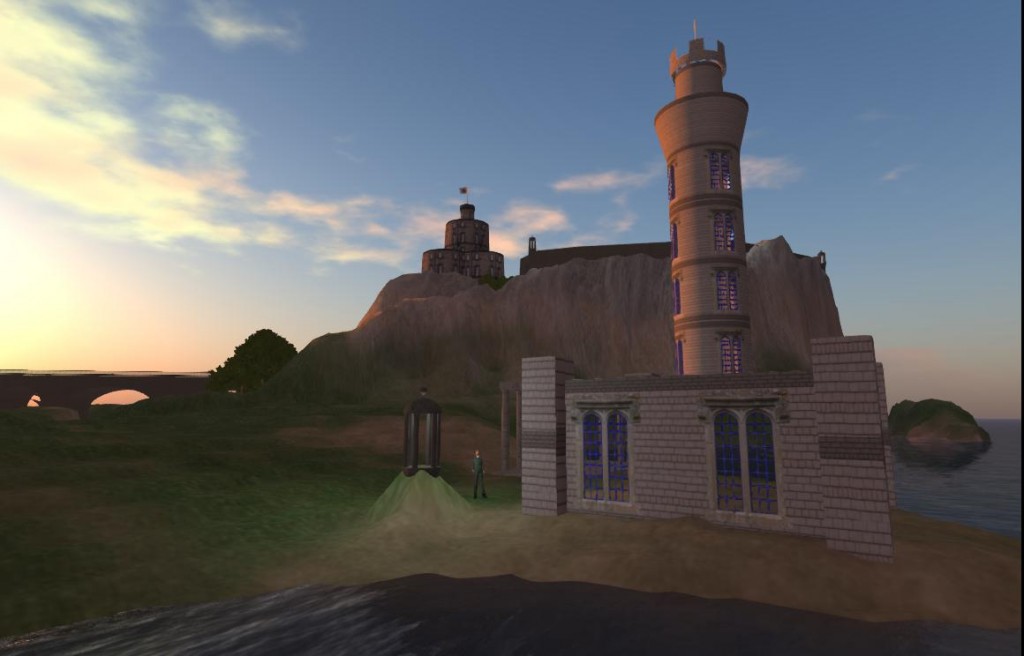 A simple Edinburgh themed “base” region, which has a diagonal thoroughfare called “High Street” separating the project areas to each side, along with “The Castle” at one end with a large cavern and display spaces called “The vaults” below it, and “The Tower” at the other end of the street. The familiar Edinburgh skyline “Calton Hill” monuments are placed to one side. This base is used to replicate for project spaces that have Edinburgh backgrounds. In The Vaults a replica of the “Trans—~Formation” trans-media artwork and associated musical experience is available. 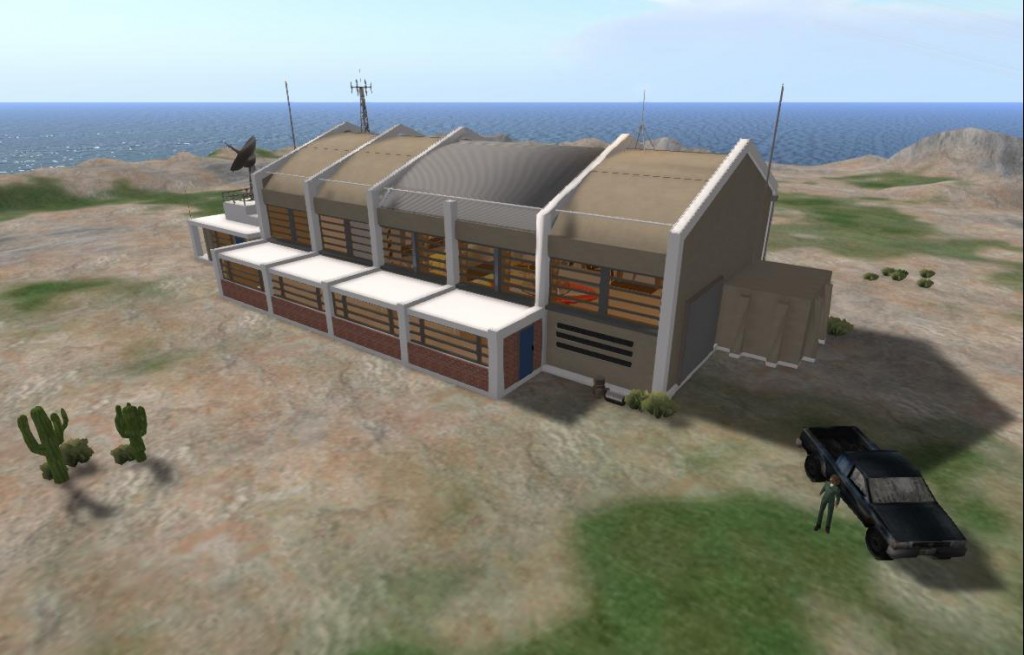 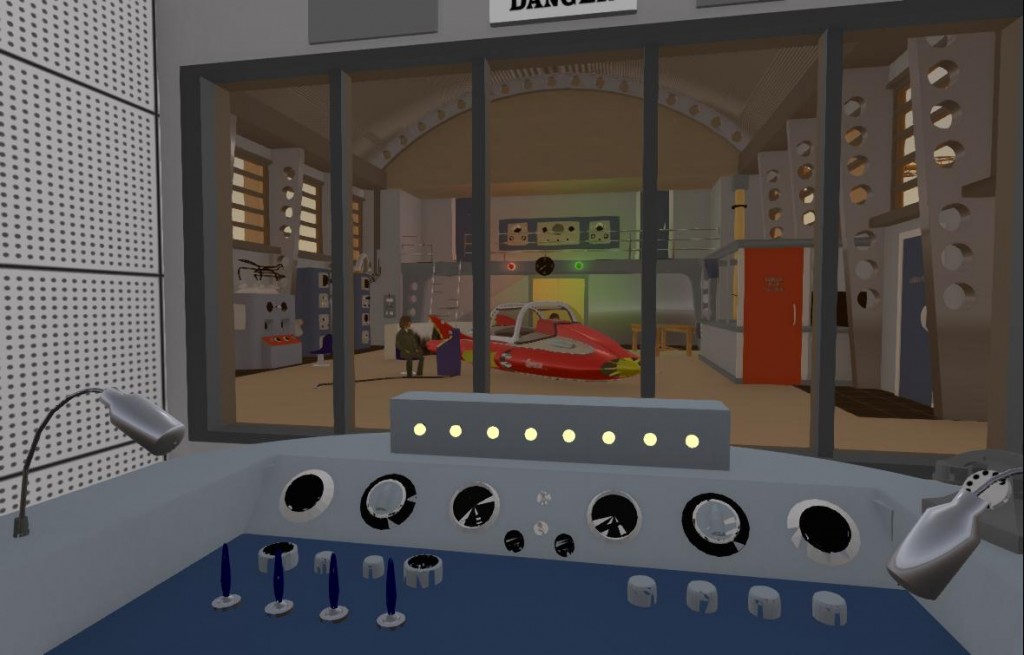 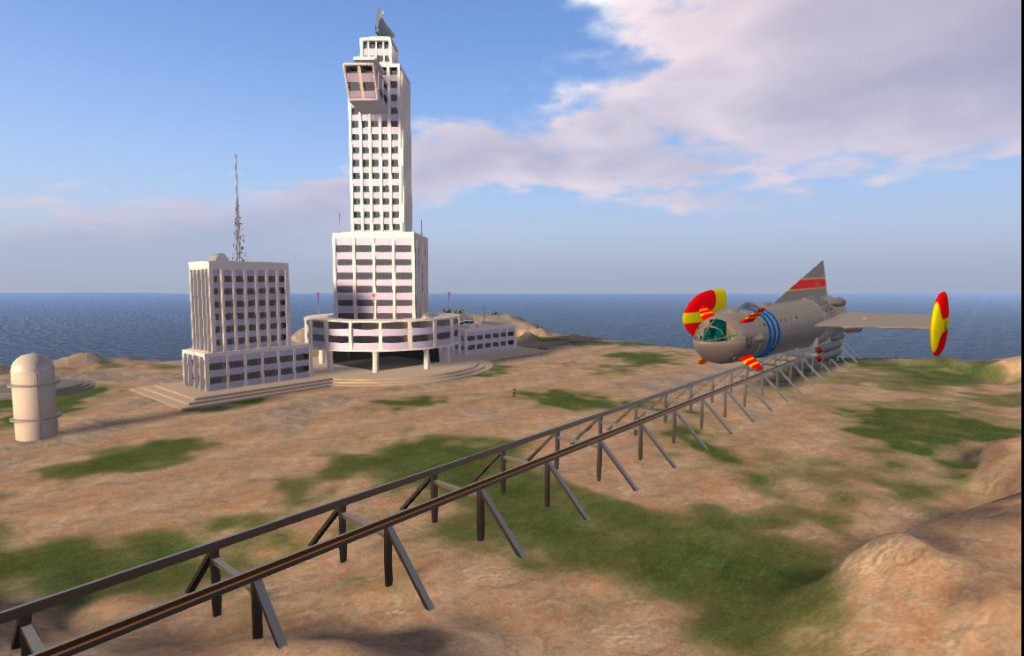 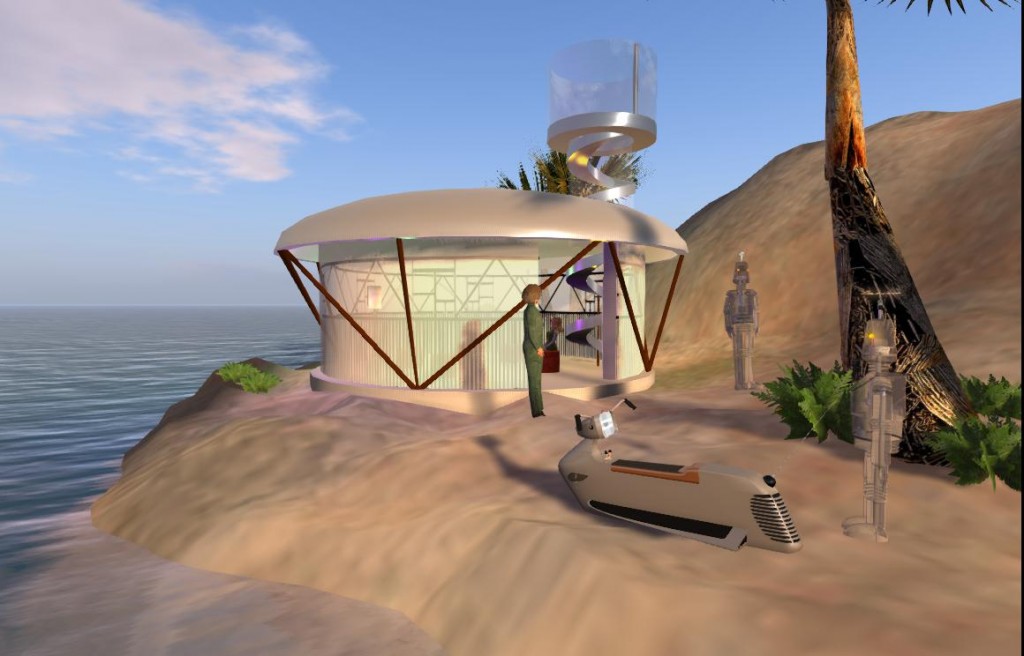 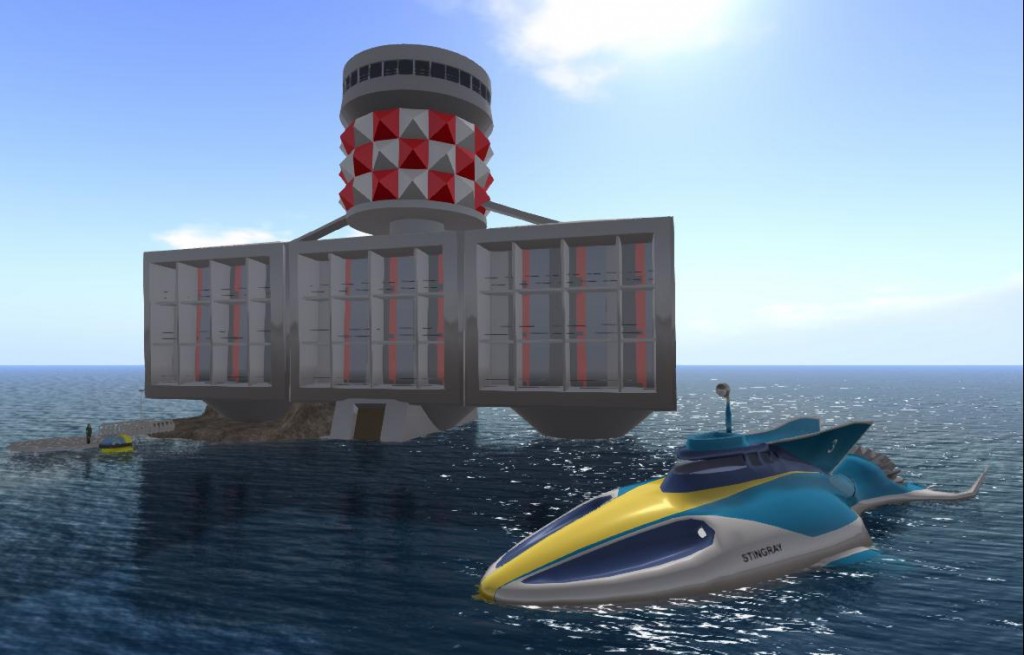 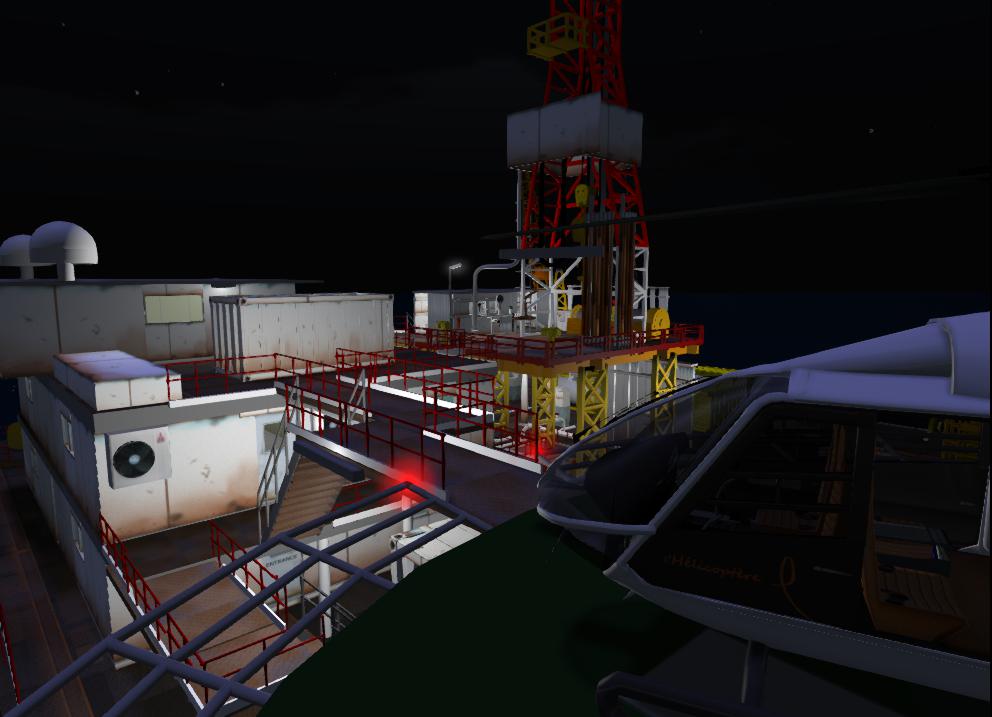 A large mesh model of a North Sea oil rig used for training purposes at the Oil and Gas Centre at Robert Gordon University (RGU) in Aberdeen, Scotland and originally on their own OpenSim grid. It is off-shore oil rig being used for training and simulations. It is used on Vue regions with RGU’s permission. 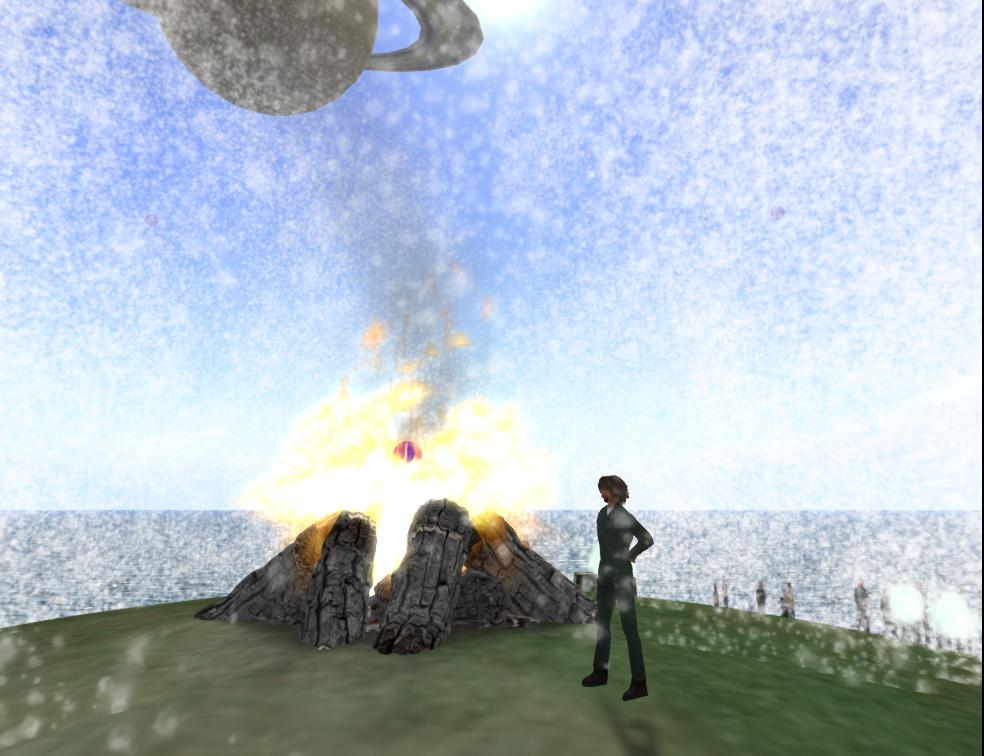 A digital artifact created during my studies in 2011/2012 for an MSc in e-Learning, studied by online and distance education in our School of Education to update my knowledge of online teaching methods. The “Avatar Identity” themed area explored a number of technologies related to NPC (Non-player characters), some of which were intended to act as immersive training simulation role players, tutors and guides). 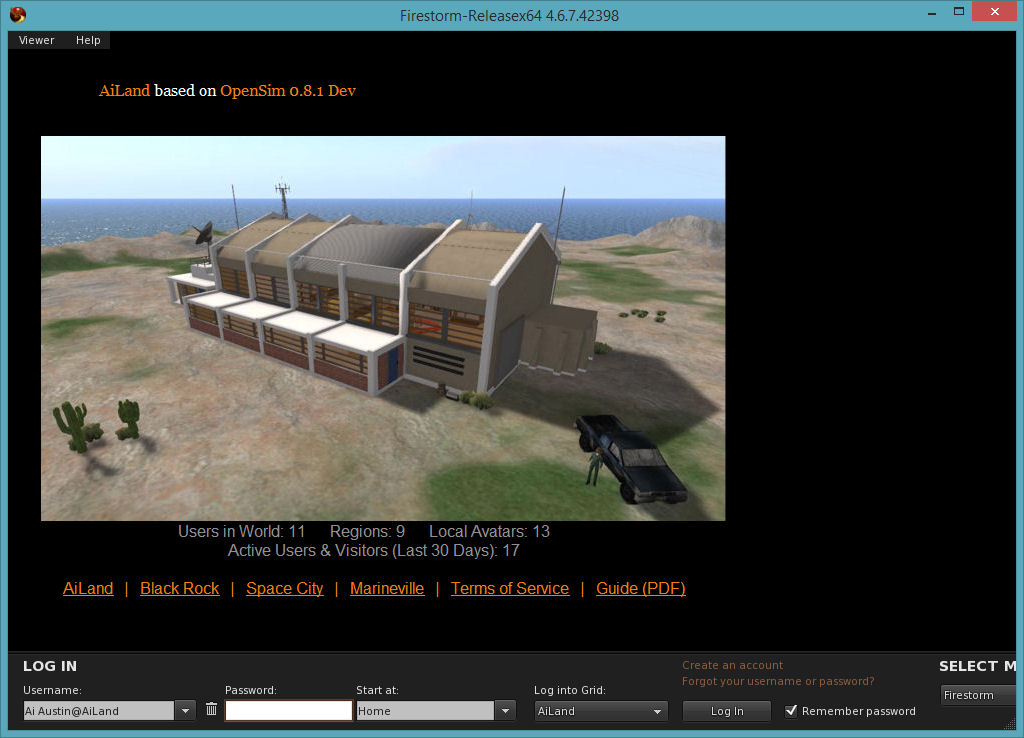 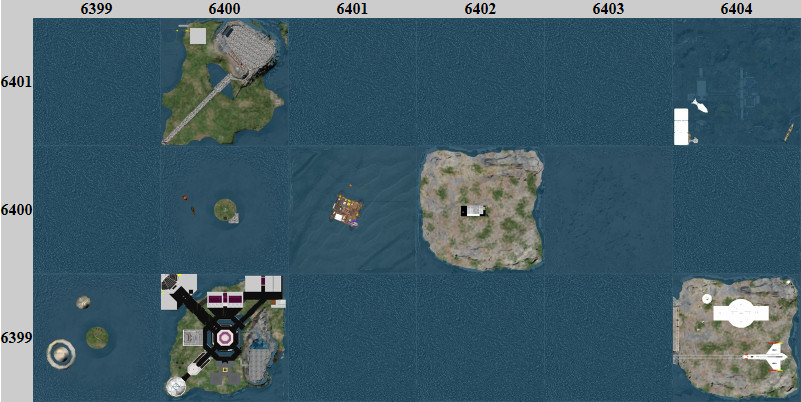 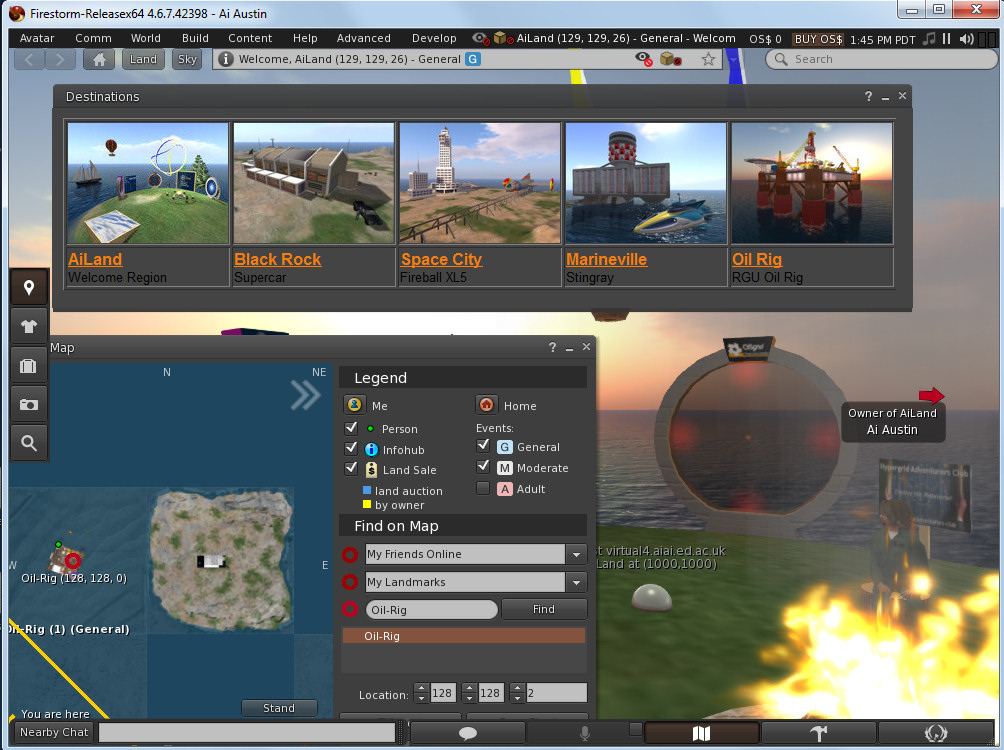 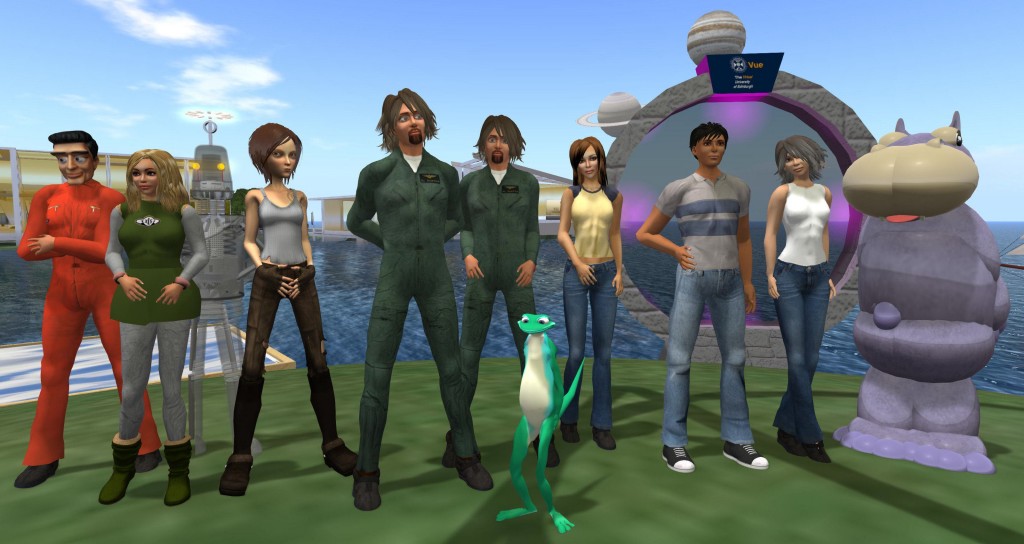 On 4th October 2014, the web interface and browser splash screens were replaced with the avatar group image and on 7th October 2014 a new stable LoginURI of http://ai.vue.ed.ac.uk:8002/ was introduced… 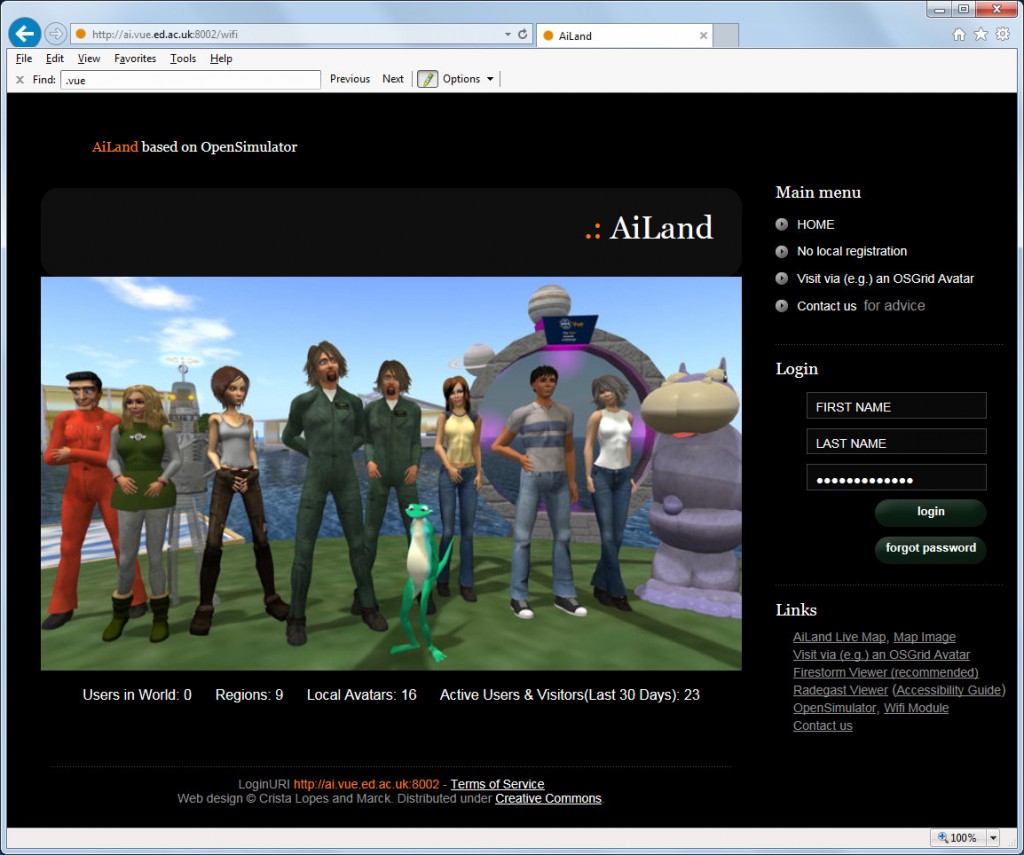