Steam has a broadcast feature that lets others watch you play a Steam game or run a Steam launched application. This can be used to broadcast Second Life activity. You add your choice of Second Life viewer to your Steam games then others can watch. This works with all Second Life and OpenSim clients. The chosen viewer can be added under your Library of Games by selecting “Add Non-Steam Game”.

You can access the broadcast settings via the Steam main menu bar: View > Settings > Broadcast. It is possible to select whether you do not wish to broadcast at all, allow only friends to request to see your broadcast, allow friends to see the broadcast without a specific request, or allow the broadcast to be visible to anyone via Steam. The “Record my microphone” needs to be enabled to include the broadcaster’s own in world (Vivox) input. More details here… Steam Broadcasting Documentation 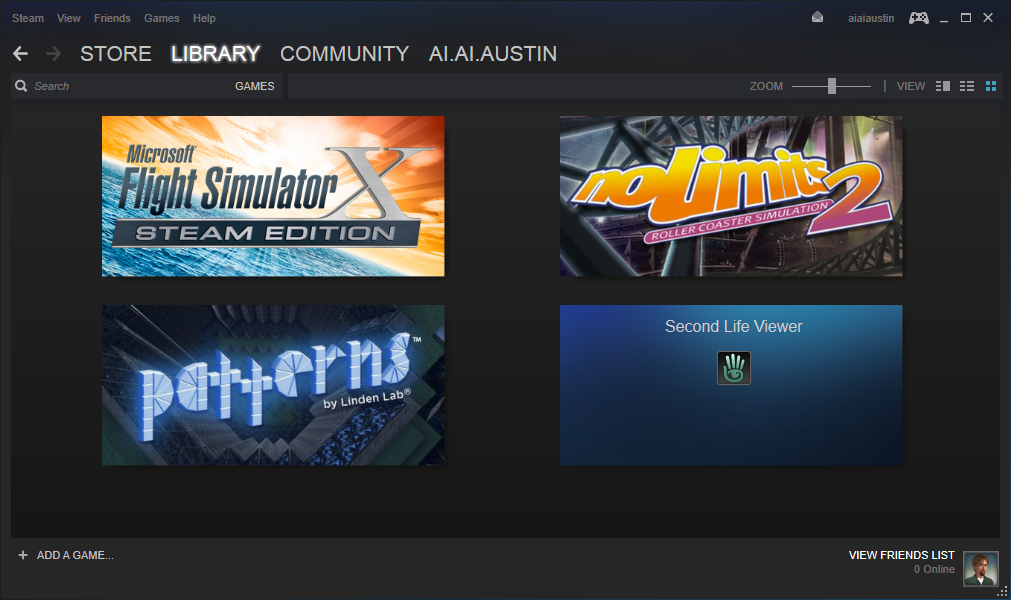 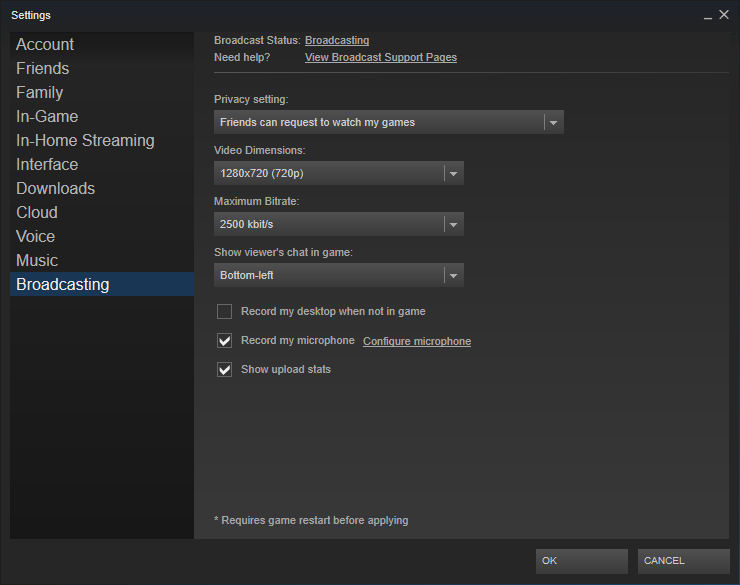 Shift+Tab keys toggle into and out of the Steam overlay to see chat and accept or reject requests to view when the mode is selected to allow friends to request to watch. Here is an example screen with the Stream overlay on the Second Life Viewer with a friend request incoming… 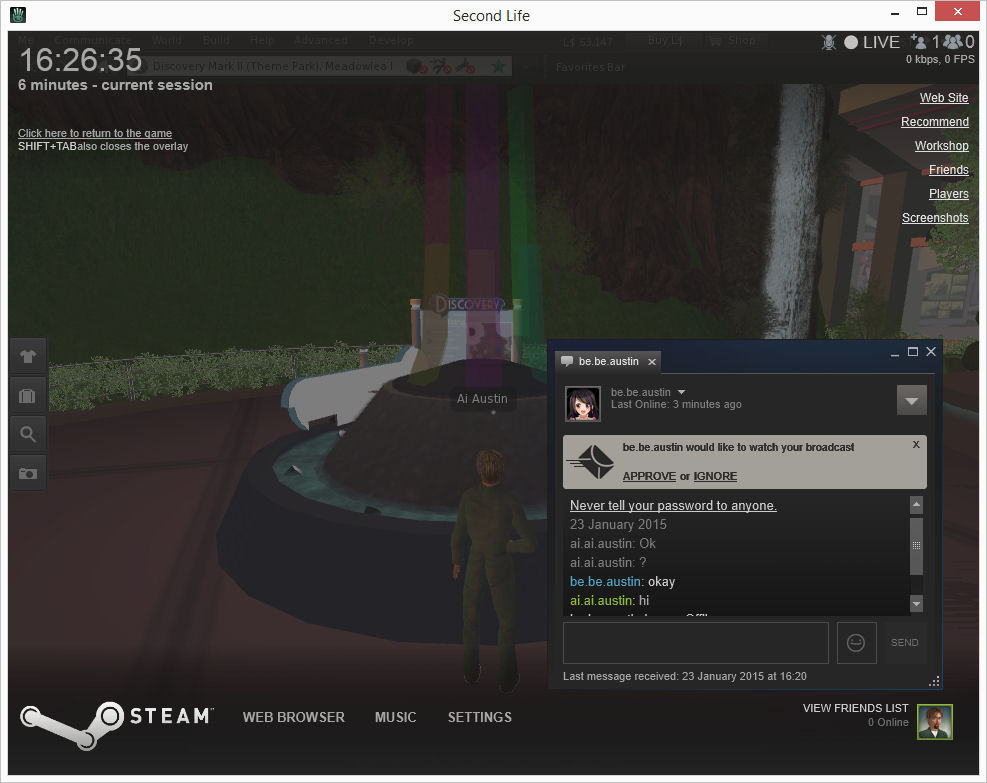 The person viewing the broadcast does not need to have the Steam client installed, it can work it a browser. Requests can be made from a friend while logged into steam in a browser via http://steampowered.com. 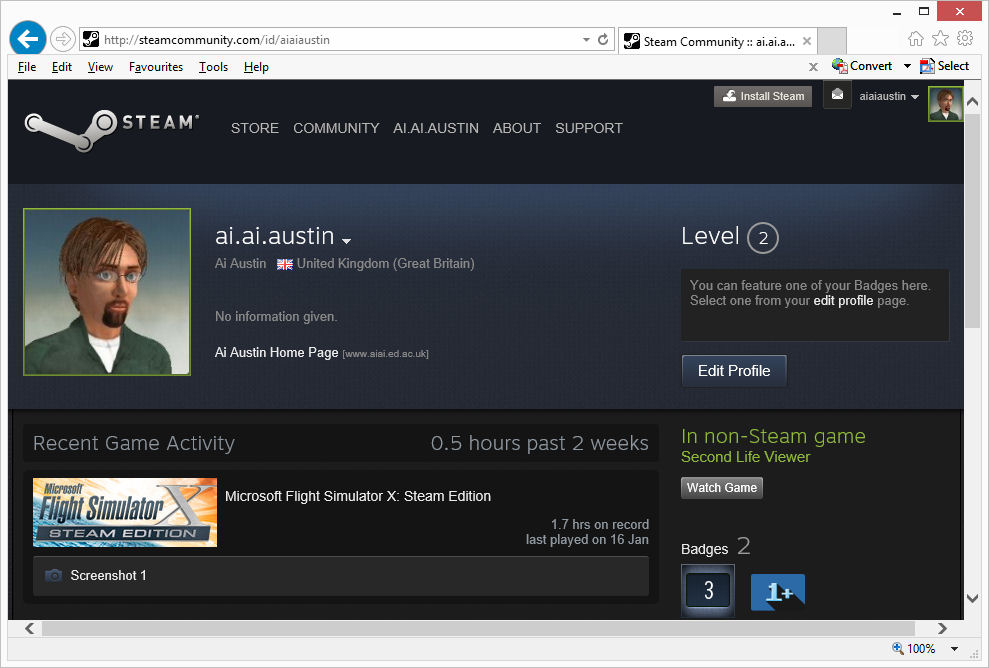 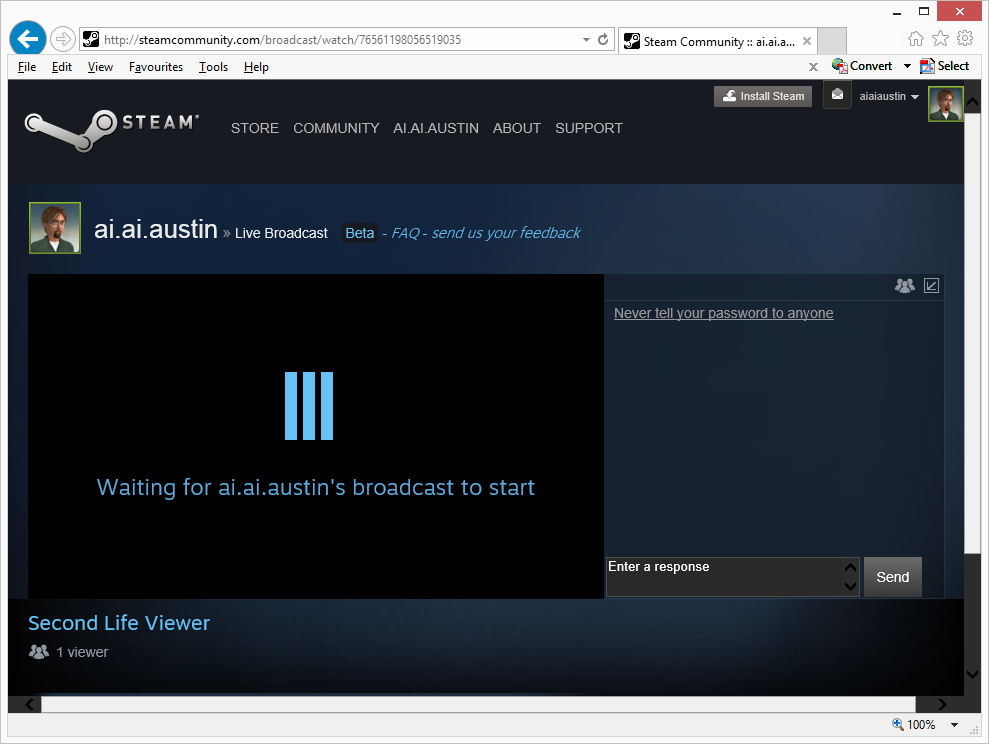 Tests were conducted on a 50mbps home broadband cable connection with Second Life running at approx. 25fps according to the in viewer statistics. Steam Broadcast was set to allow friends to request to watch, 1280×720 (720p) format, and allowing for 2500kbps max broadcast bandwidth, the Second Life Viewer showed that it was broadcasting using approx. 2000kpbs and achieving a steady frame rate of 29/30fps. 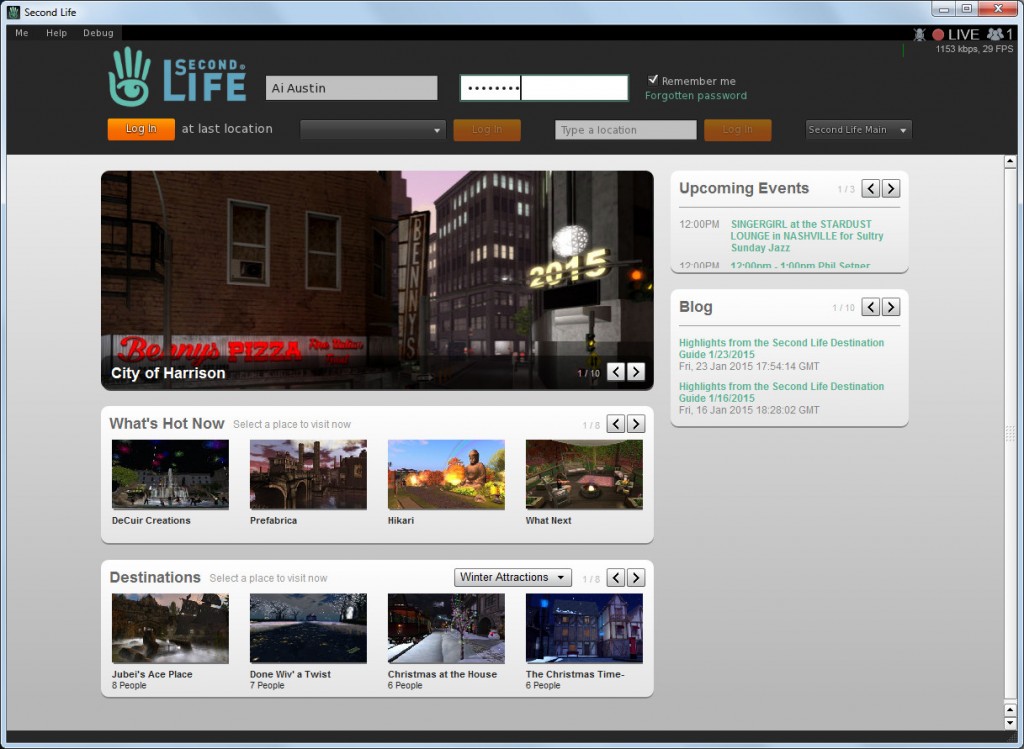 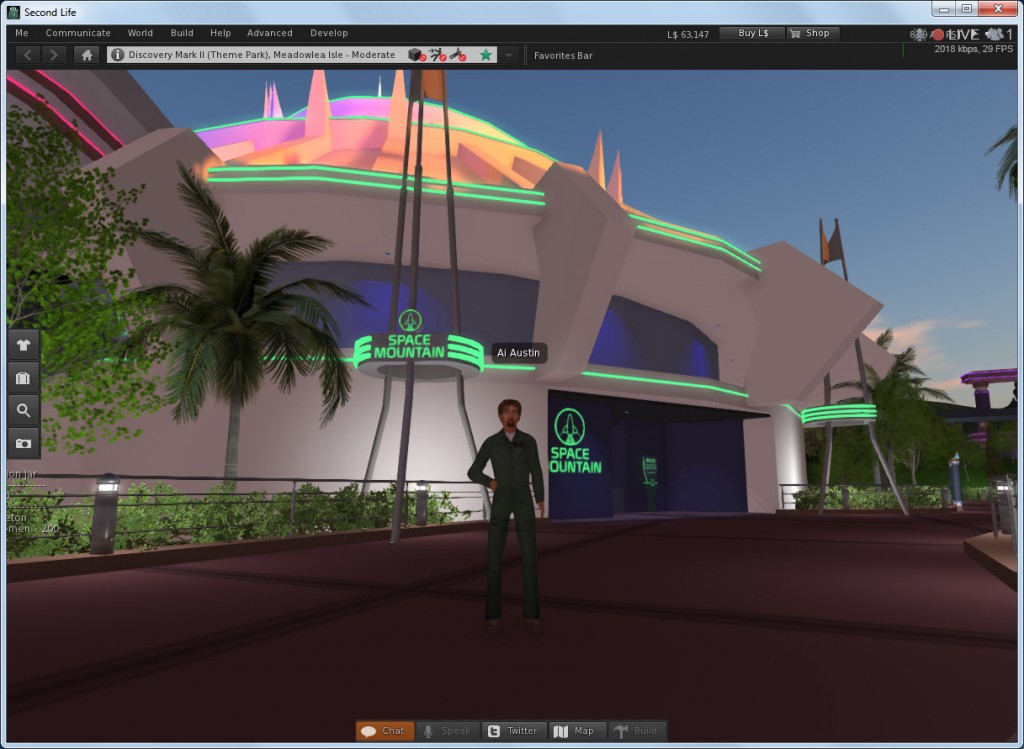 The watcher was on a Microsoft Surface under Windows 8.1 using Internet Explorer 11 and saw the 720p broadcast very smoothly, subjectively as smooth as it appeared in the main Second Life viewer. There was approximately a 7 or 8 second delay from action on the Second Life Viewer and it being seen by the watcher, which is better than we previously achieved using an Apple Mac Media Server Quicktime Steaming Service (QTSS) Broadcaster where delays of 10 to 15 seconds between broadcast and receiver are typical. 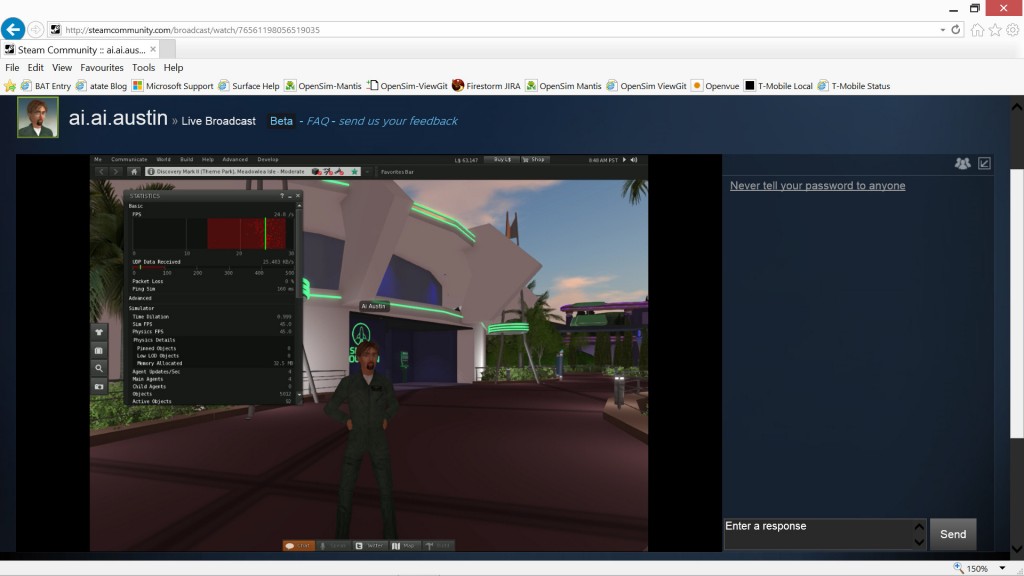 The Steam overlay can be brought up or dismissed while in the Second Life Viewer using shift+tab as shown in this image.. 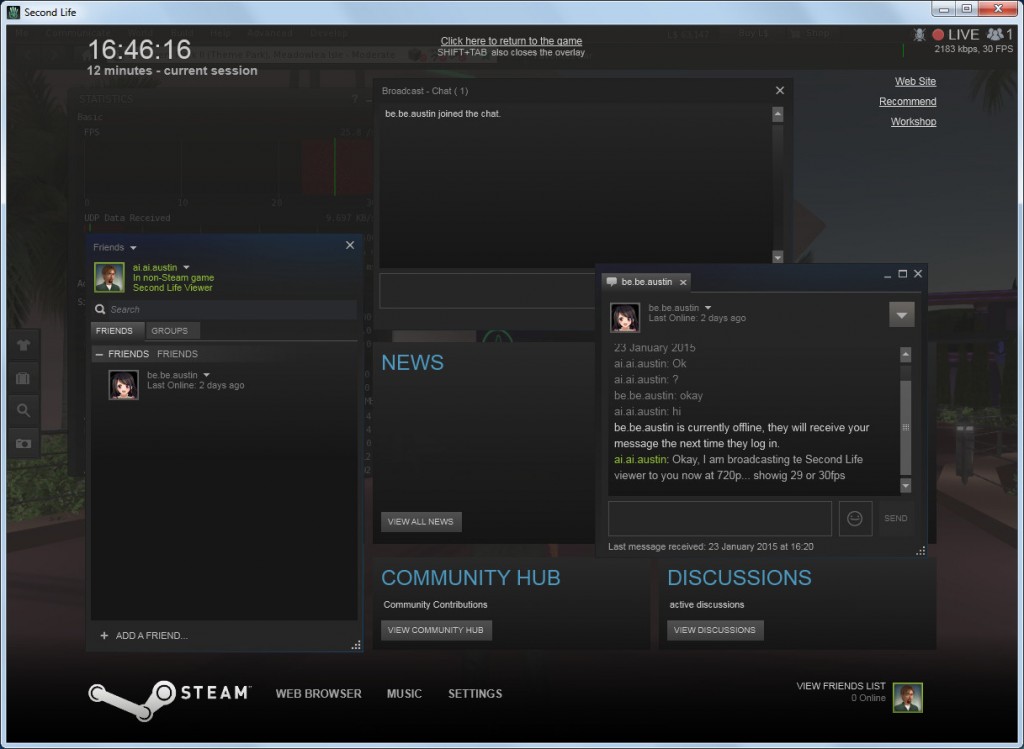 When the Steam overlay is not showing over the Second Life Viewer, incoming chat can be shown overlaid onto the viewer screen… in this case I have selected “top left” as the location where incoming Steam chat will pop up briefly.. as shown in this image… 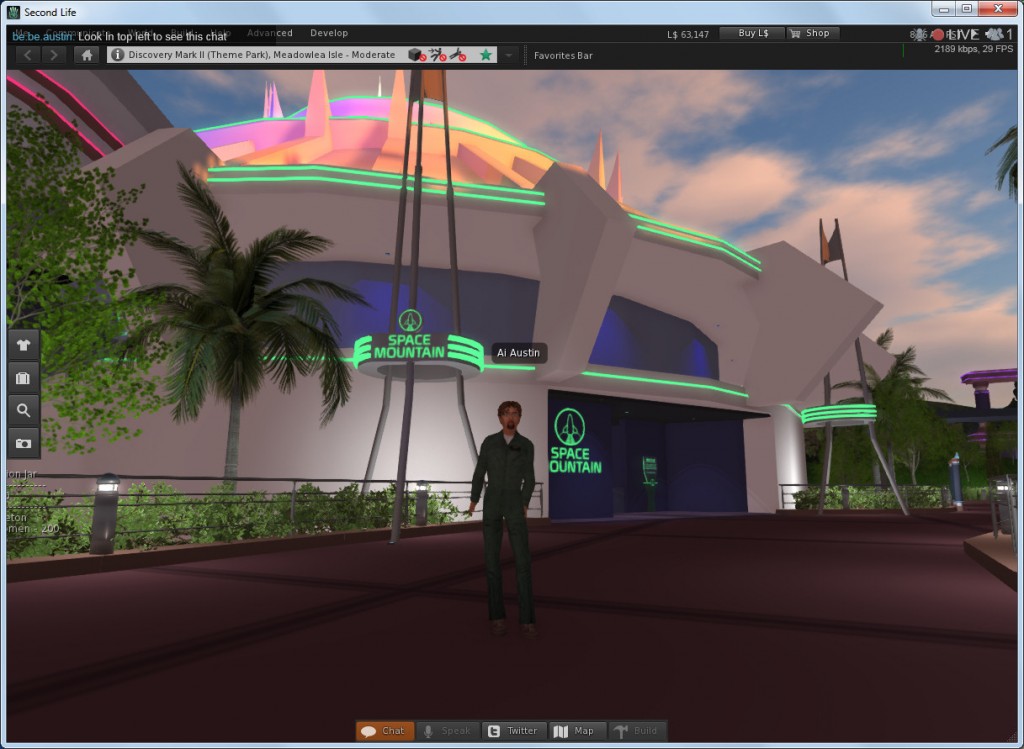 Tests were also conducted on a fast University network. Tests were made on the same region, with the same windows size and visual quality parameters, and the camera facing the same direction… 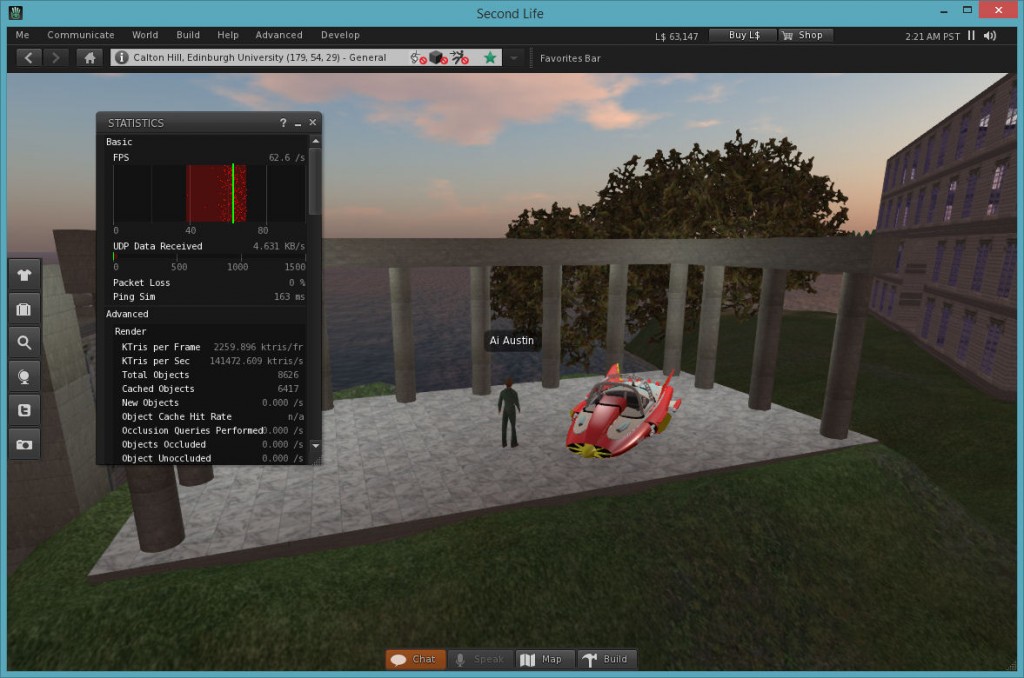 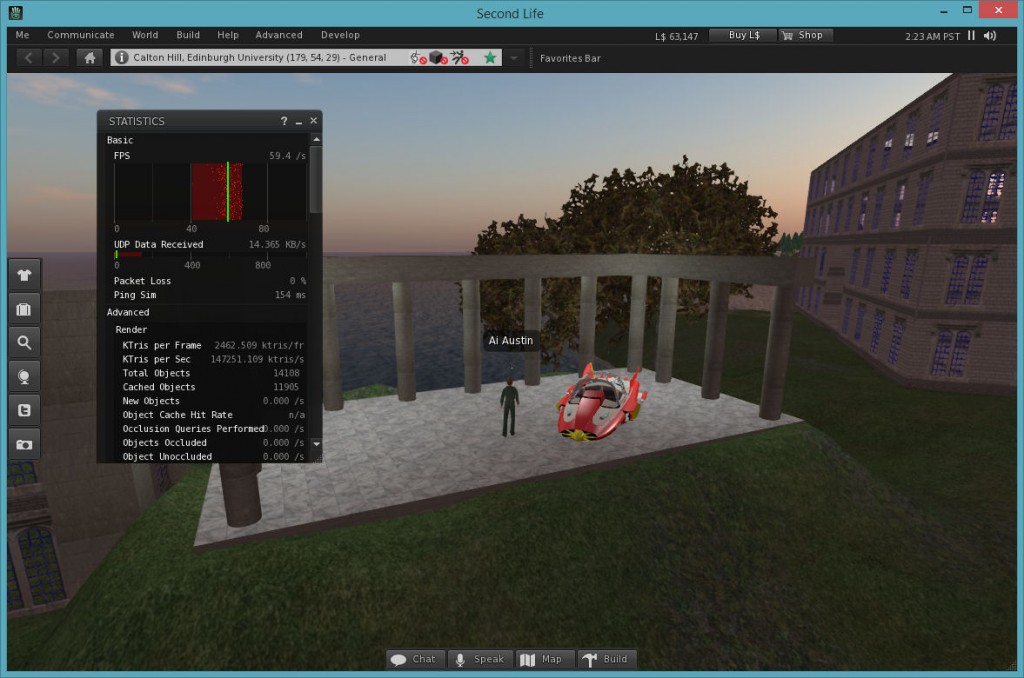 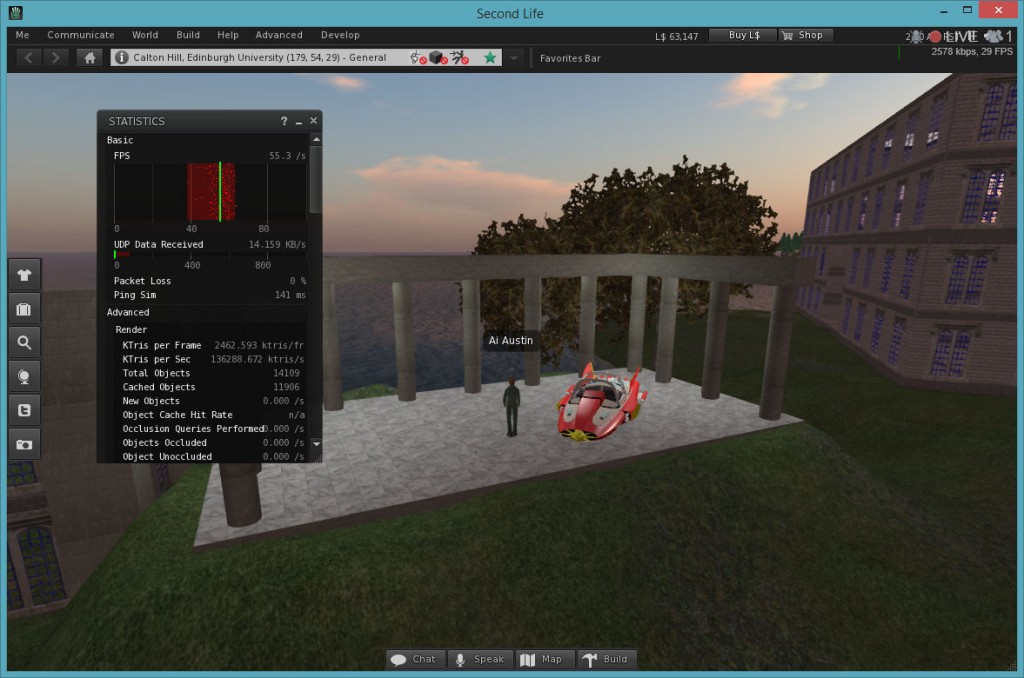 The Second Life Viewer showed that it was broadcasting using approx. 2300kpbs and achieving a steady frame rate of 29/30fps. The watcher was on a desktop PC under Windows 8.1 using Internet Explorer 11 and seeing 1280×720 (720p) video that looked smooth after a delay of approx. 8 seconds. 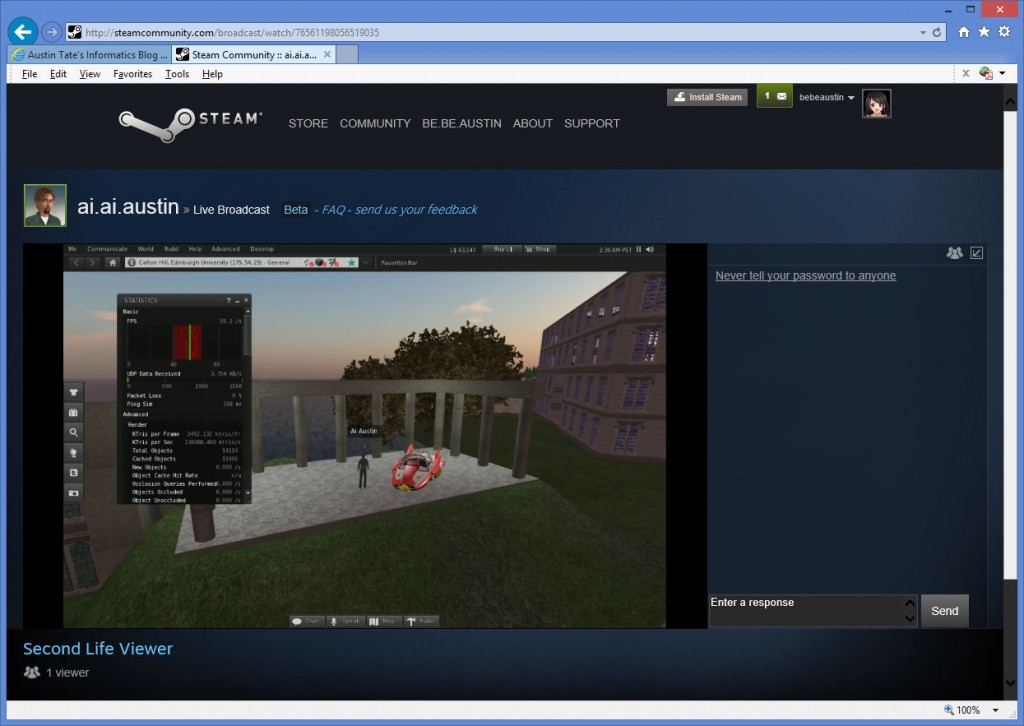 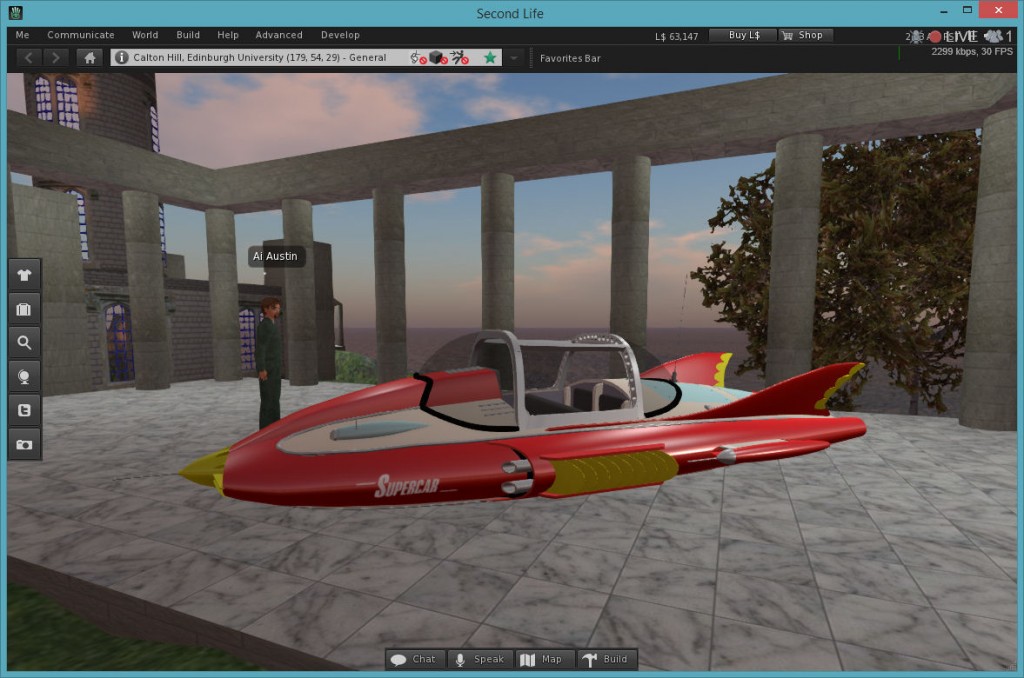 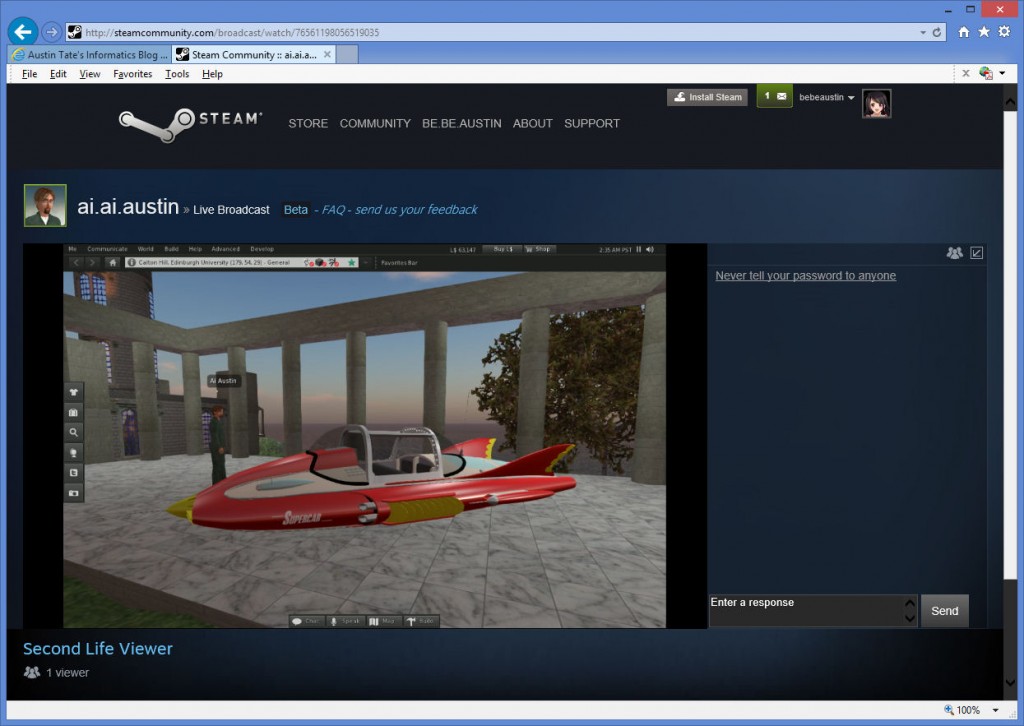 User interface sounds (such as mouse clicks), environmental sounds in world (such as wind, water and other ambient sounds, media playback such as via media screens, videos, etc. all worked fine. 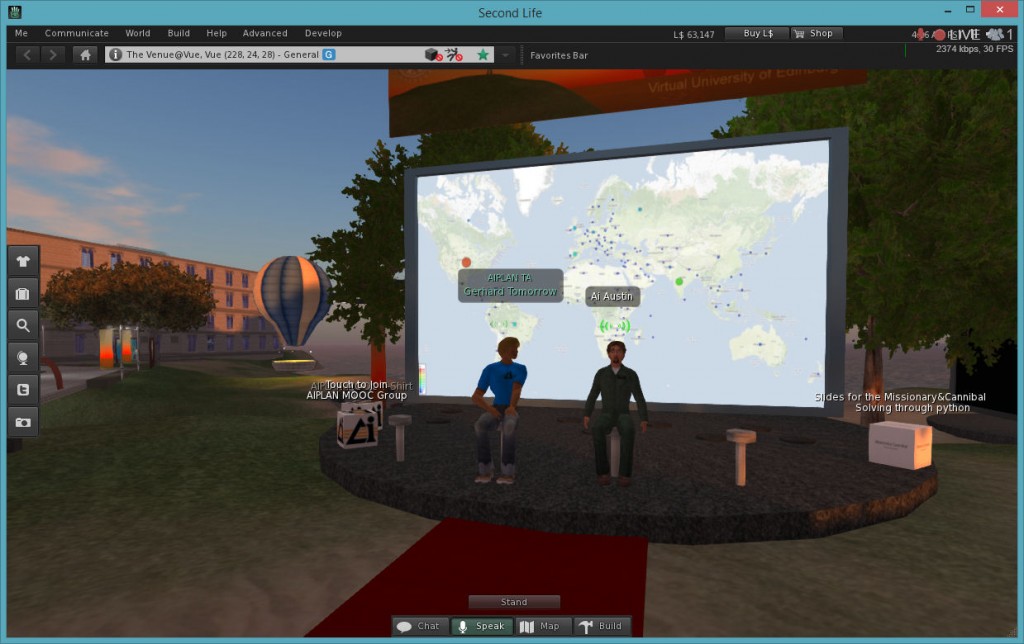 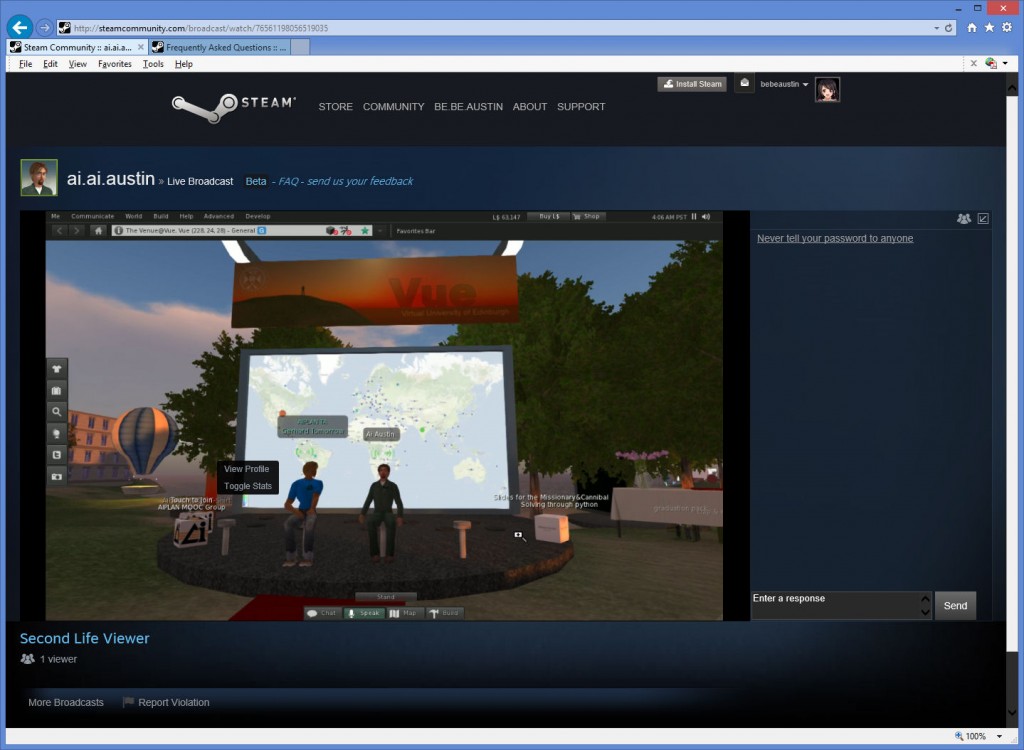 A custom image can be set to display for the Steam Control Panel view, using a 460×215 sized JPEF, PNG or TGA image… a couple of samples are given here based on the Second Life home page.

Set the Custom Image via a right mouse click on the entry for the added viewer in the Library > Games screen. 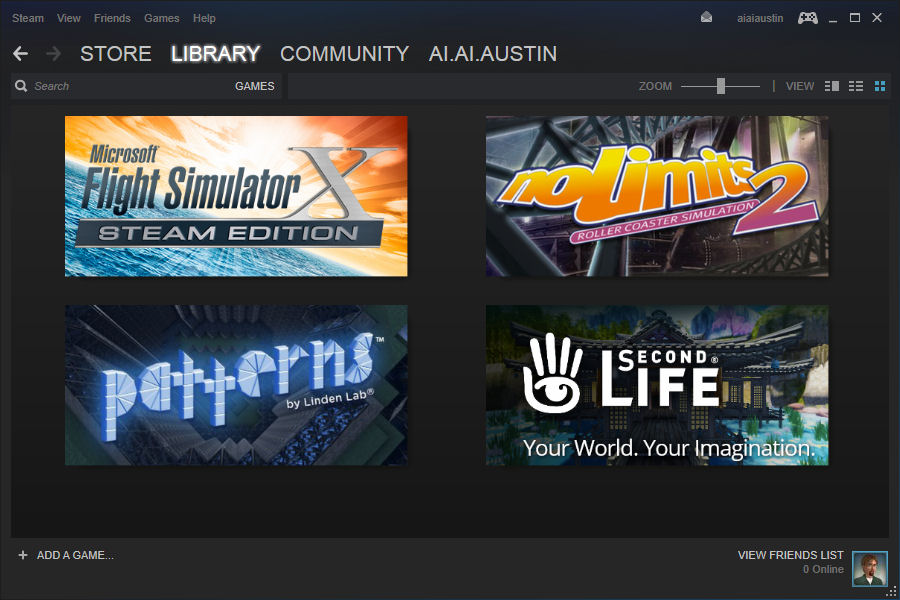