There are two presentations systems we have used in the Open Virtual Collaboration Environment (OpenVCE) in Second Life (and ported to OpenSim). 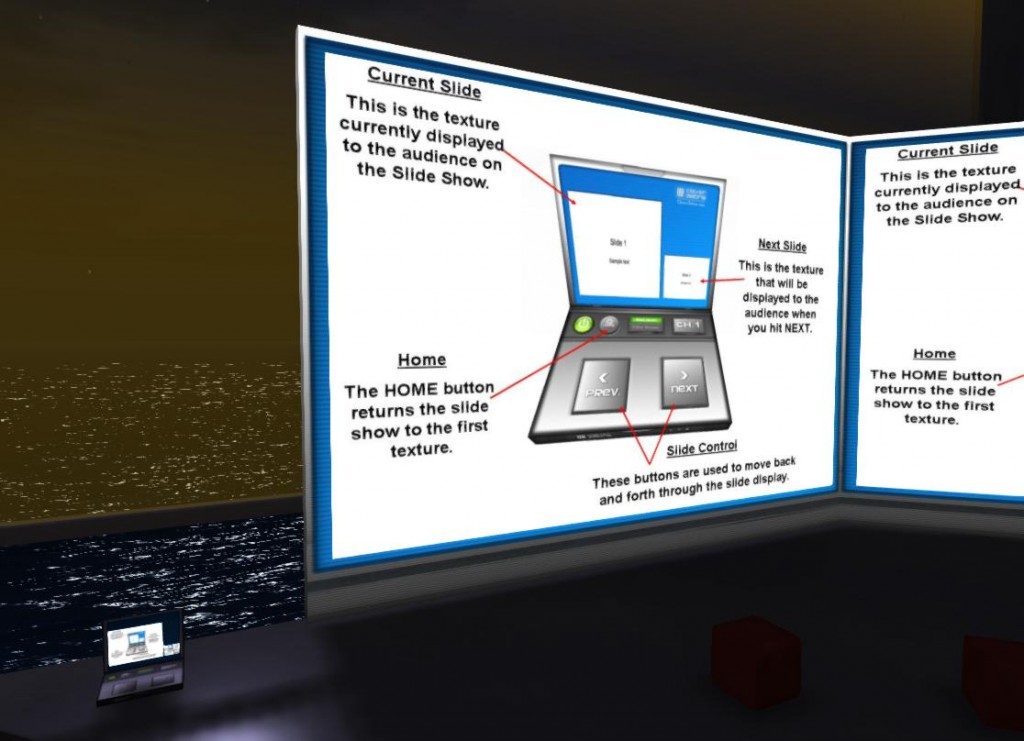 A means to display in-world slides included as textures is included within the amphitheatre on the OpenVCE region where the laptop styled presenter controls the screen(s) and contains the in-world textures to be shown. The laptop shows the current slide showing on the main screen(s) and a preview of the next slide. It provides BACK and NEXT buttons to move through the slides in turn.. and a HOME button to return to the first slide. The channel selector is there to support up to 4 simultaneous screens. Check Channel 1 is selected if you do not see the same thing on the laptop as shows on a display screen.

The Clever Zebra in-world texture presenter had a few minor glitches in the laptop controller LSL script – nothing major – and also did not have the full set of texture resources used unless you also obtained the in world objects. So I produced a full version of the virtual woreld end suitable for use in OpenSim as well as for use in Second Life. That version is at
http://openvce.net/resources/downloads/openvce-cleverzebra-presenter-resources/

Fixes: A script within the presenter device needs a small change to work properly. Download from
http://openvce.net/resources/downloads/OpenVCE-OAR-Presentation-Screen-Fixes.zip

For OpenSim use the textures used in the screen and presenter need to be made available. A full set of these resources, including the modified script is available from
http://openvce.net/resources/downloads/openvce-cleverzebra-presenter-resources/

Usage Notes: For the example (three) screens in the OpenSim Archive (OAR) OpenVCE amphitheatre ensure that channel 1 is selected on the laptop presenter so that what you select on that shows on the screens. If the presenter is owned buy a group, ensure the avatar that uses the presenter selects that group as active.

AIAI and the Virtual University of Edinburgh (Vue) people involved in Second Life and OpenSim use also created a presenter screen that can take in-world slides put into the screen from uploaded or saved textures. Small thumbnails of the slides around the current one on show are displayed along the bottom of the screen, and can be clicked on to quickly move to the individual slide. Start and Finish of presentation quick jump buttons, Next and Previous buttons are also provided. The screen can also be set to display the parcel media URL which can contain video, web pages or something similar that can be displayed using the QuickTime display system built into Second Life and OpenSim viewers. 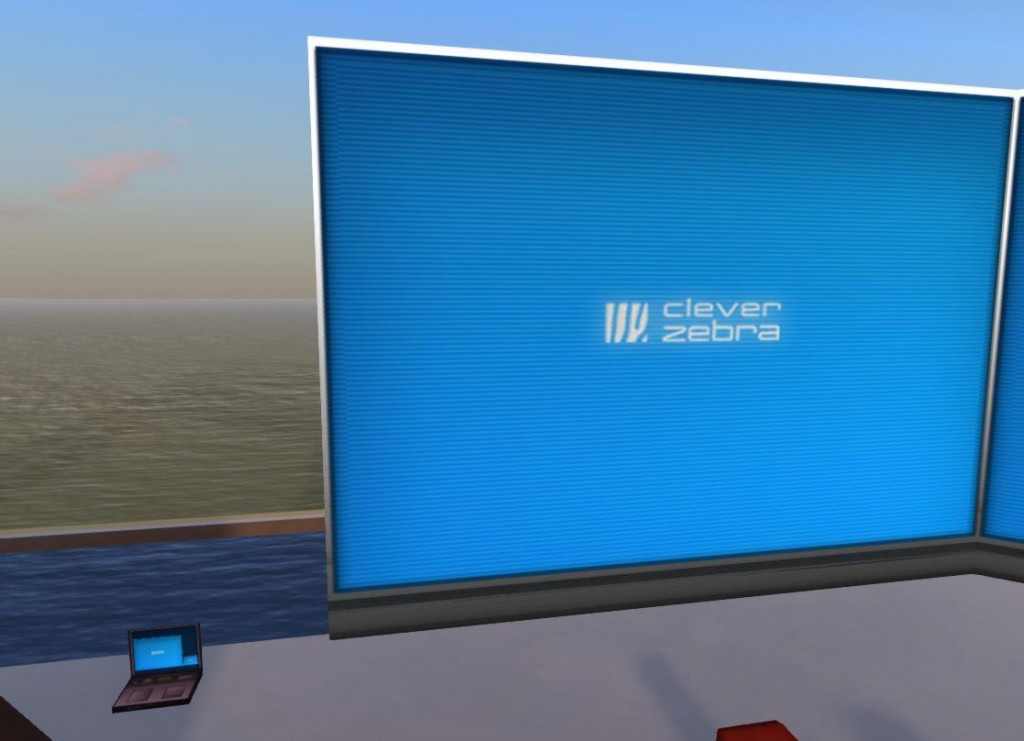 There is also a more technical Clever Zebra Open Source presentation system, which can be tied to a web-based presentations management area provided as a Drupal 6.x module. The version as provided by CZ for the OpenVCE project under the LGPL licence rather than their standard GPL licence is available via:
http://openvce.net/resources/downloads/
file: drupal-6.14-module-presentation-v1.0.zip

This matches the Drupal distribution created by CZ based on the modules choices made for the OpenVCE project. This custom load with various add on modules is at:
http://openvce.net/resources/downloads/
file: drupal-6.14-openvce-distrib-v4a.zip 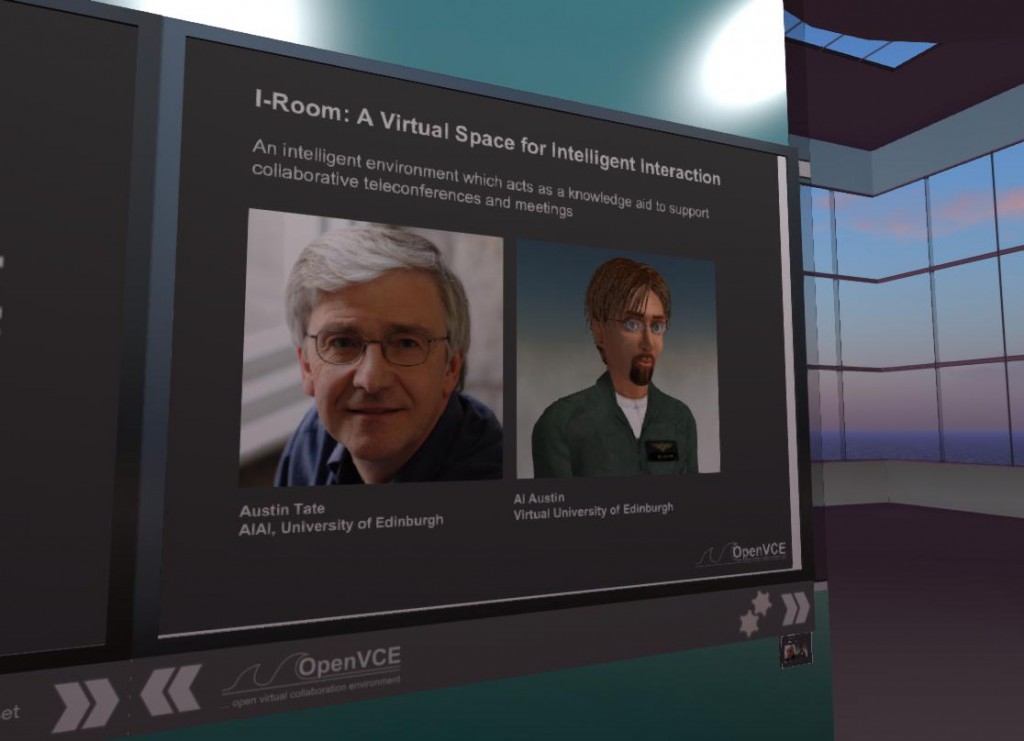 The final presentation system is one created by my own colleagues here at Edinburgh and that also uses a web end based on PHP scripts set up to be used through Drupal. It supports PDF and zip presentation uploads and conversions at the web end, as well as multiple avatar presentation shows on the same screen.
http://openvce.net/presenter

But its a bit technical at the web/Drupal end, and not something I am willing to support. But we have no problem in others taking ideas in the code to use if they have the technical skill. I have already provided it to the Moodle/SLoodle community in case its helpful for their VW presenter.

I would also draw your attention to the Moodle/SLoodle presenter system which might have more widespread community support. Their presenter screen just supports one presentation at one time per screen though, so its not yet very flexible. As noted above, I have provided our own presentation technology into the SLoodle development community to allow for PDF uploads, conversion via ImageMagick, and appropriate serving of the converted images into the in world parcel’s media URL.

Browse on http://openvce.net/resources/downloads/ for some ideas.