AltspaceVR (http://altvr.com) is developing a virtual world in which people can meet, chat, share media and have fun. Interested users could register for the beta-testing events and they were invited into a beta-test weekend on 25th and 26th April 2015.

Avatar choice is quite simple, a male, female and neutral robot style avatar which can have a custom coloured badge. 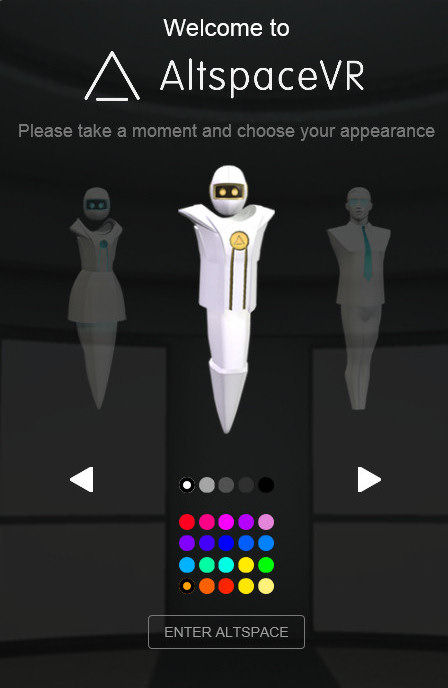 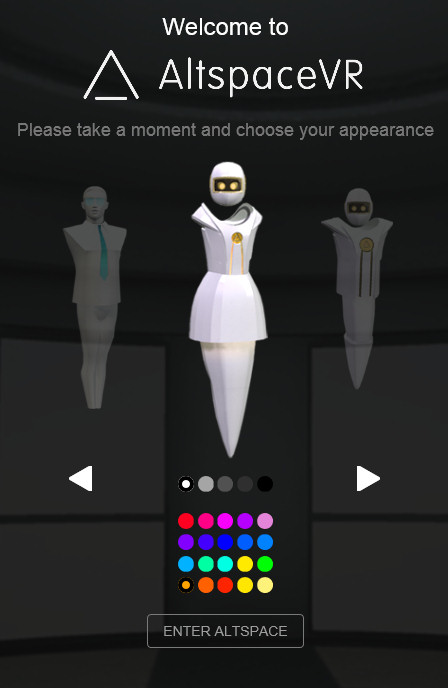 A series of events were available for the beta-test weekend… 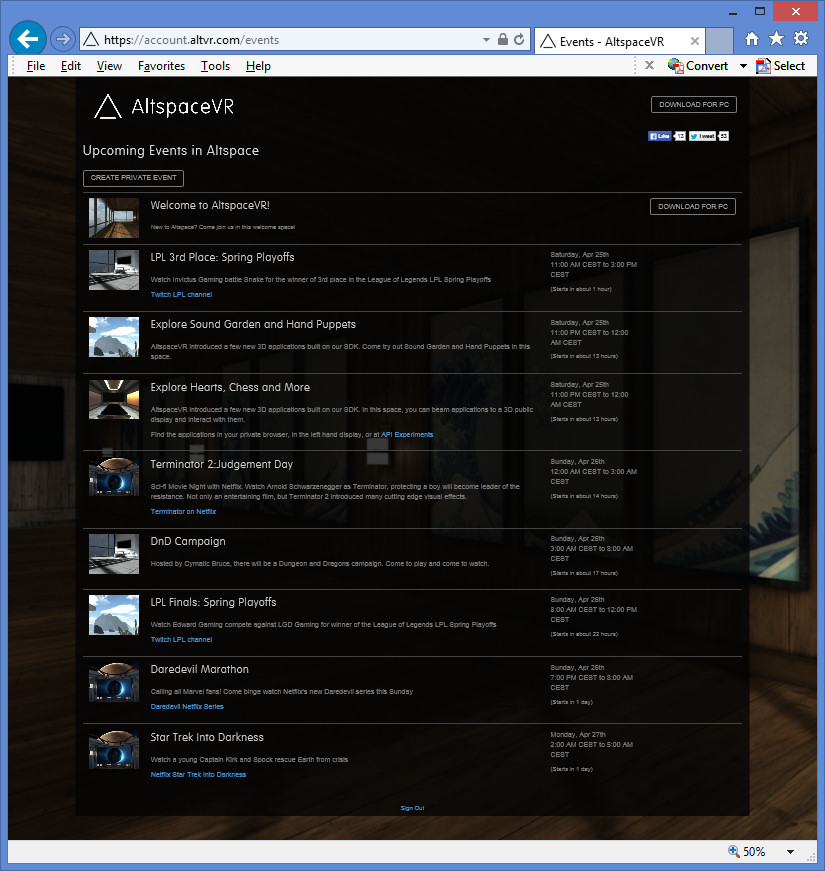 After entering AltSpace3D, if you have an Oculus Rift attached you will see its view… if not a standard 2D view is presented. You are initially in a welcome area where a tutorial plays out on screen… 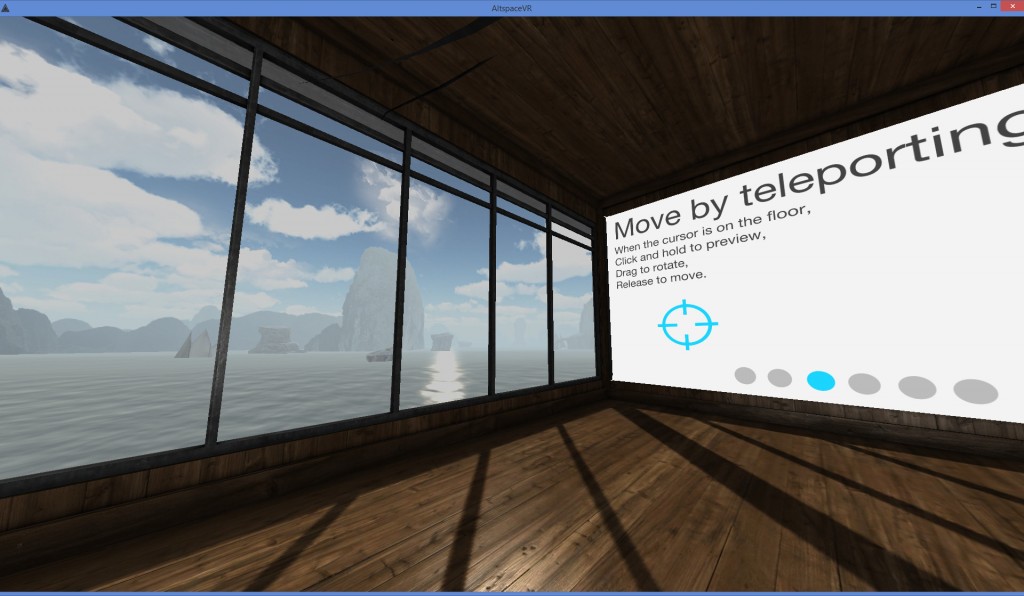 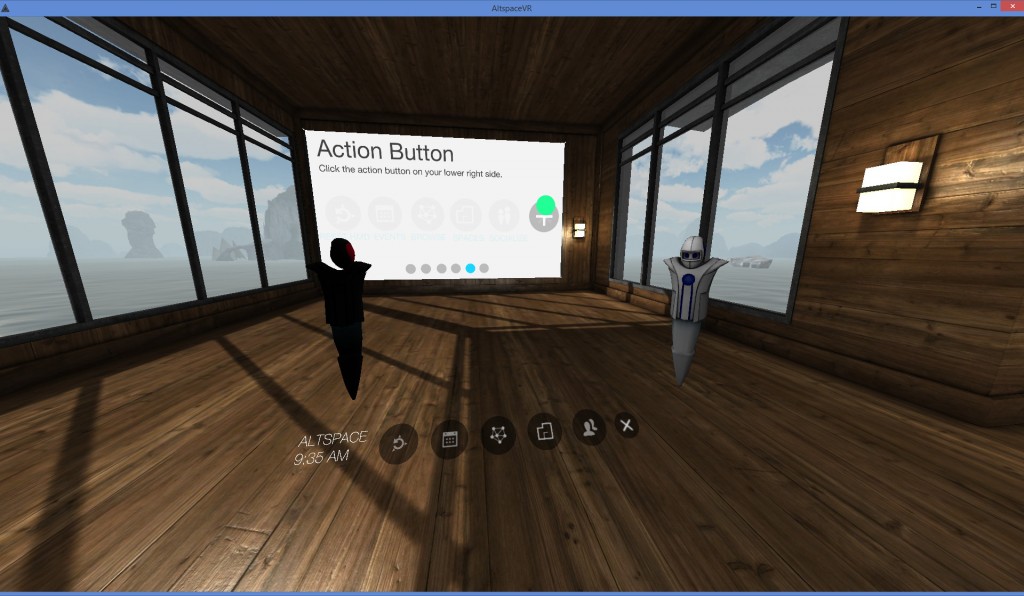 Help on using AltspaceVR is available at https://altvr.zendesk.com/hc/en-us. AltspaceVR is mainly set to use the Oculus Rift and a Kinect motion controller or an Xbox for Windows controller at present, but can be used in 2D mode too and with mouse control. Some important keys are:

Some of the initial areas during the beta testing weekend include the Welcome Room with a tutorial, and a space to talk via voice to other users, and to click on them to link up as followers… 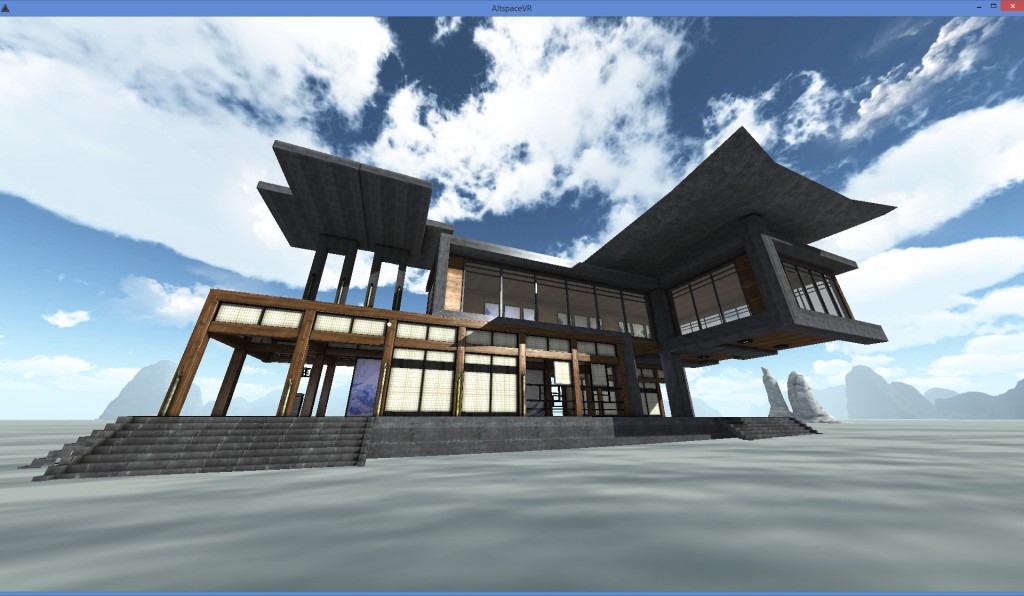 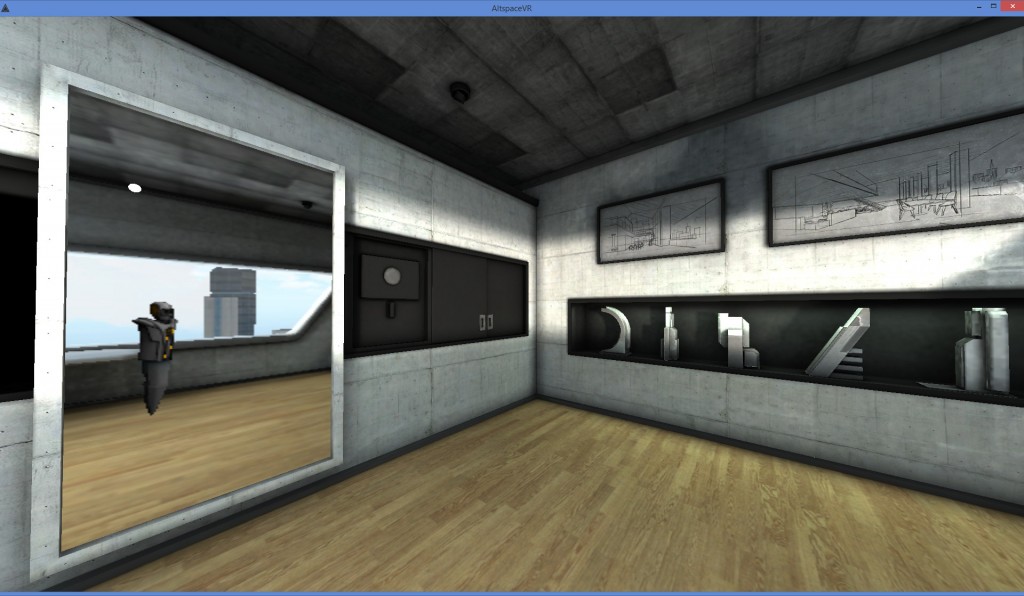 A very helpful beta-tester and developer based in the Eastern USA called “Falkrons” gave me some tips and showed me some demos on a “Place” called “Desert Island”. 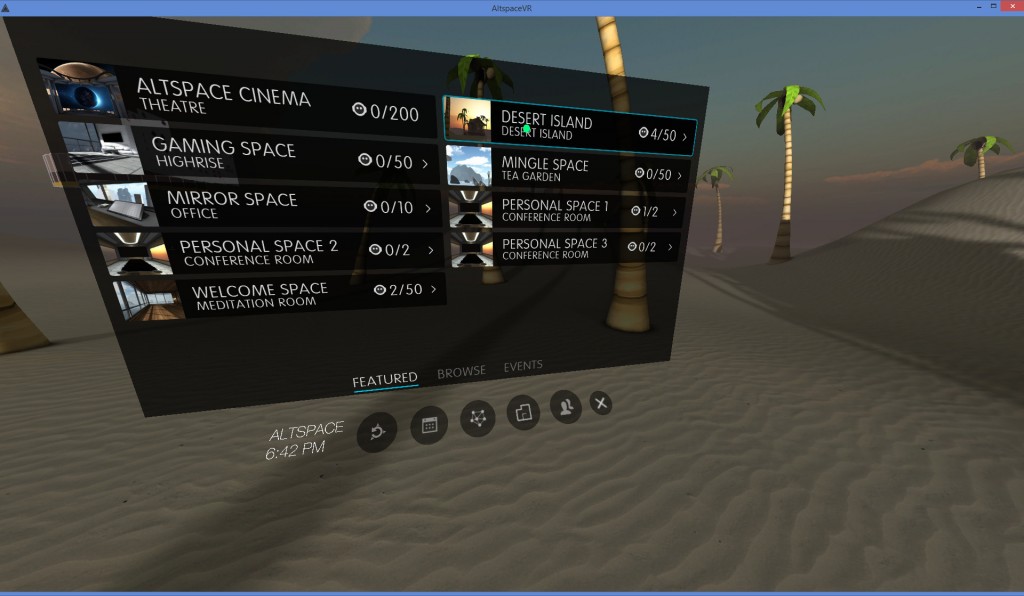 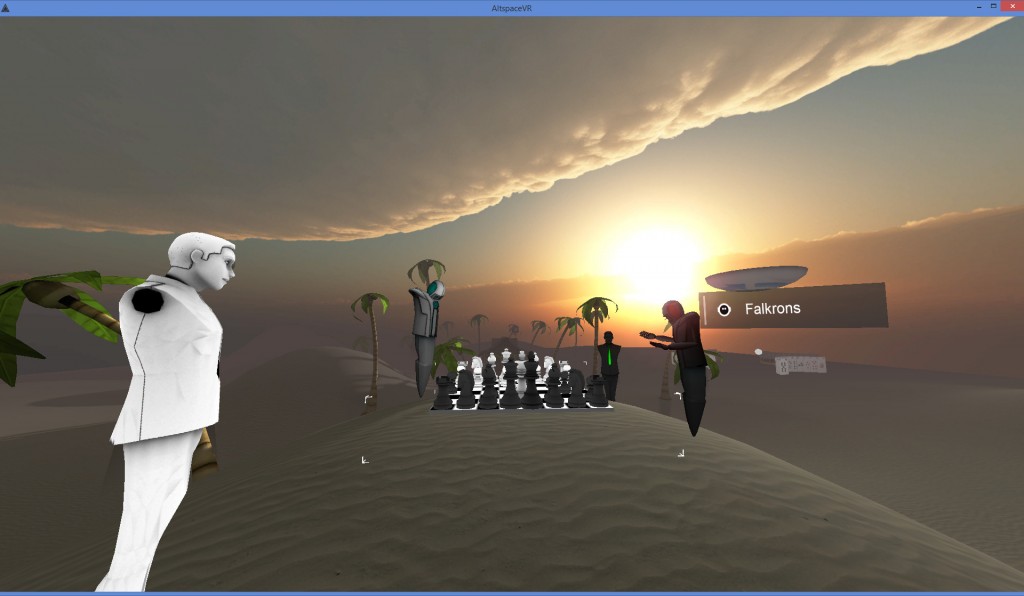 The 3D in world chess game is an interactive playable board with pieces that can be selected and controlled using Javascript rendering into the 3D VR space using the AltspaceVR SDK.

The main menu is brought up with a right click of the mouse and lets you access the web media browse, events list, and spaces list including showing how many users are in each space and the space capacity (N/M). A socialize button lets you see who is in each space and go to them, or “follow” them which adds those you meet, friends or colleagues to your followers list and allow you to see if they are online. 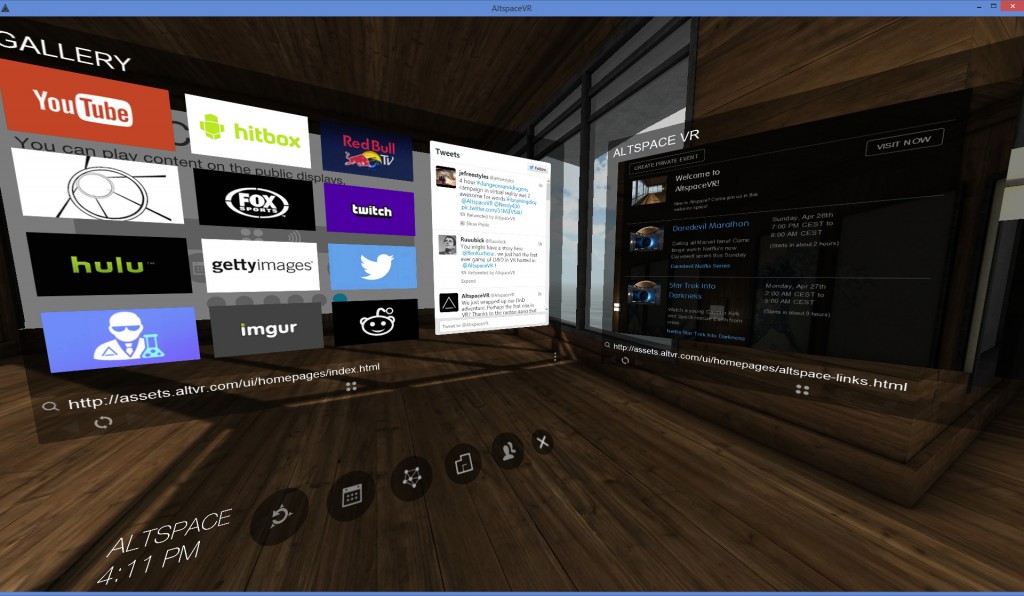 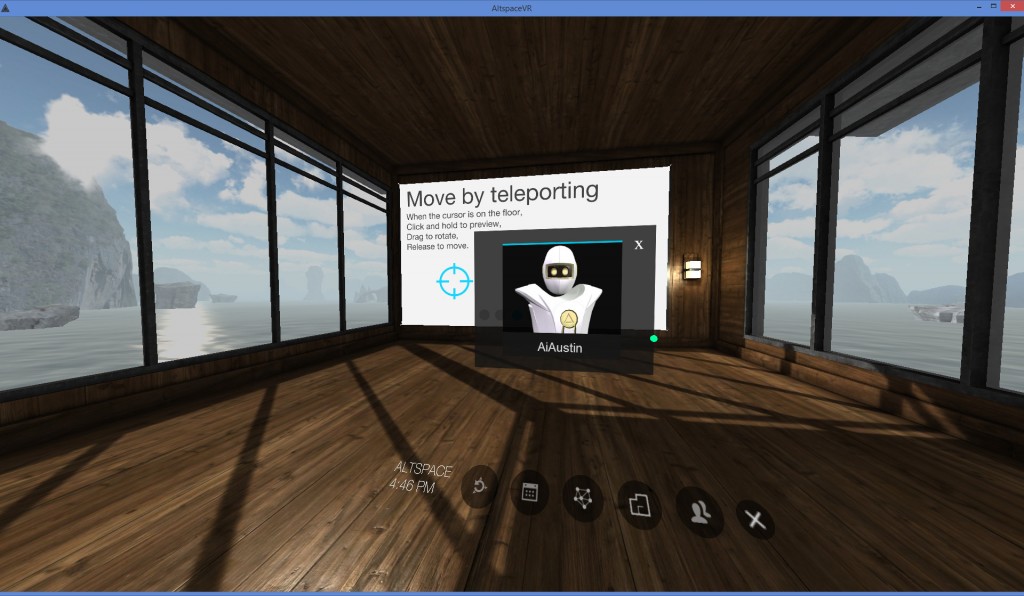 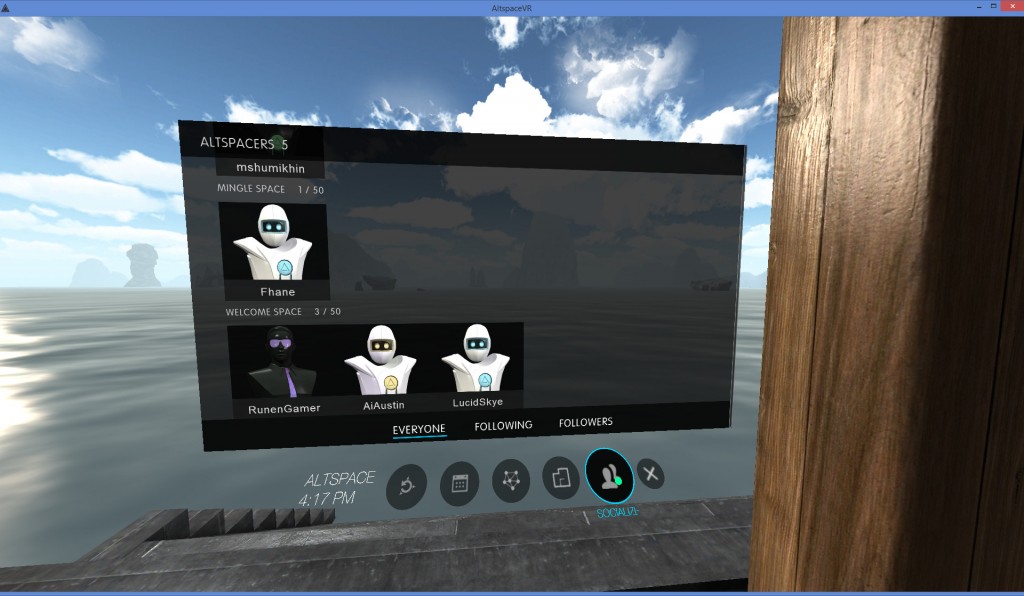 Testing with the Oculus Rift, Leap Motion and Xbox Controller 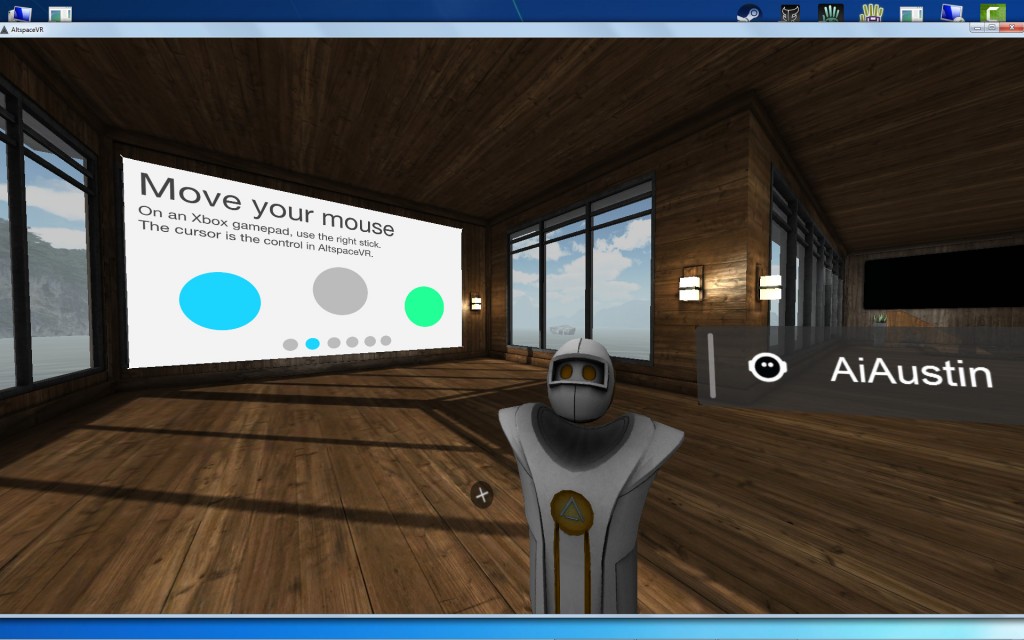 Following on from the beta test weekend, I tried access via the Oculus Rift DK2 working in direct mode. The 3D imagery is very crisp and menu buttons and popup panels, avatar name tags, etc are all displayed at a comfortable eye distance. I could not work out how to take a screen snapshot of the Rift “double barrel” view… but here is a shot of how the Rift equipped avatar, Ai Austin, appears when seen by another avatar. The head moves up, down and right or left depending on where your gaze is in the Rift.

The Leap Motion device is also supported… but it is assumed the device is mounted looking forwards and downwards on the Rift HMD.. Mine is flat on the table looking up and back to the user, so left and right hands are flipped/mirrored. The Leap Motion is automatically discovered by AltspaceVR and a hand or hands in its field of view show in world for the avatar. Arms are not shown for the Leap Motion, though images from other users indicate that arms are shown if a Microsoft Kinect is used for hand input. 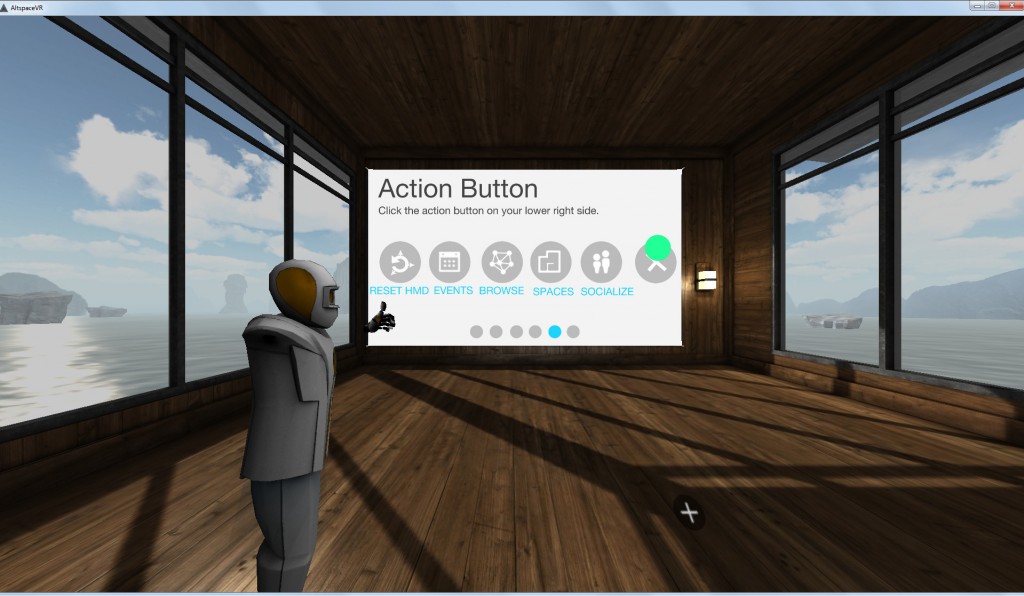 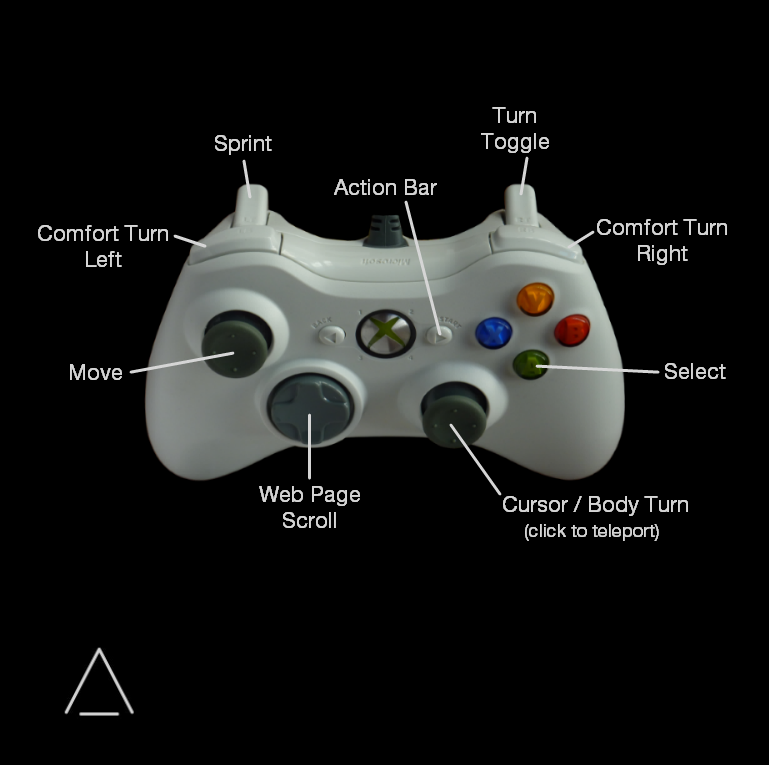 When using the Xbox 360 for Windows controller, the left stick controls avatar forward, back, strafe left and strafe right with turns done via the direction you are looking in the Rift. The right stick moves the cursor focal point so you can operate menus – which can be done with the “A” select button on the controller. left and right bumpers rotate the avatar.

More details are on the AltspaceVR help pages (see notes).