Simple Use of Git for OpenSim Development

Contributions are made by “non-core” developers who can submit a “patch” attached to the OpenSim Mantis issue tracking system at http://opensimulator.org/mantis. These are reviewed by one or more OpenSim core developers who can, if appropriate, then approve and insert the patch to appear in the OpenSim Git development “master” at http://opensimulator.org/viewgit/

The notes here are the process I used, after a few experiments, to establish a simple Git environment and workflow on a Windows 10 desktop to allow me to create patches in the required form to potentially contribute to OpenSim.

Setting up the Git Tools, a link to the OpenSim Master Repository and Making a Branch for your Changes

Now you are all set to make changes, and to create patches from the changes you make. I found that the “GitHub” GUI tool was most useful from this point right up to the preparation of a patch, for which I swapped back to the Git Shell. Git settings and branch changes made in the Git Shell and GitHub Tool for any GitHub project are synchronised (the magic happens in the projects .git directory).

At any time, independent of whether you are using GitShell or the GitHub Tool, you can make any changes you wish to the files in C:\Users\username\Documents\GitHub\opensim by directly editing them. It is suggested you use an editor (e.g. emacs) that does not change the Unix style OpenSim file line endings

OpenSim development asks for patches to be prepared and attached to an OpenSimulator Mantis issue. The following commands create a patch for the last commit (-1) or changes between the current “master” – known as “origin/master” – and the commit labelled #hashtag is the one for the commit, usually 8 or so characters are sufficient to identify it) … and places the patch in a directory one up from the opensim repository files…

Note that using –stdout > patch.txt does not work for opensim use as the line endings are Windows form)..

The results will be in C:\Users\username\Documents\GitHub\tmp

Inspect the patch to check it looks okay… an example follows… 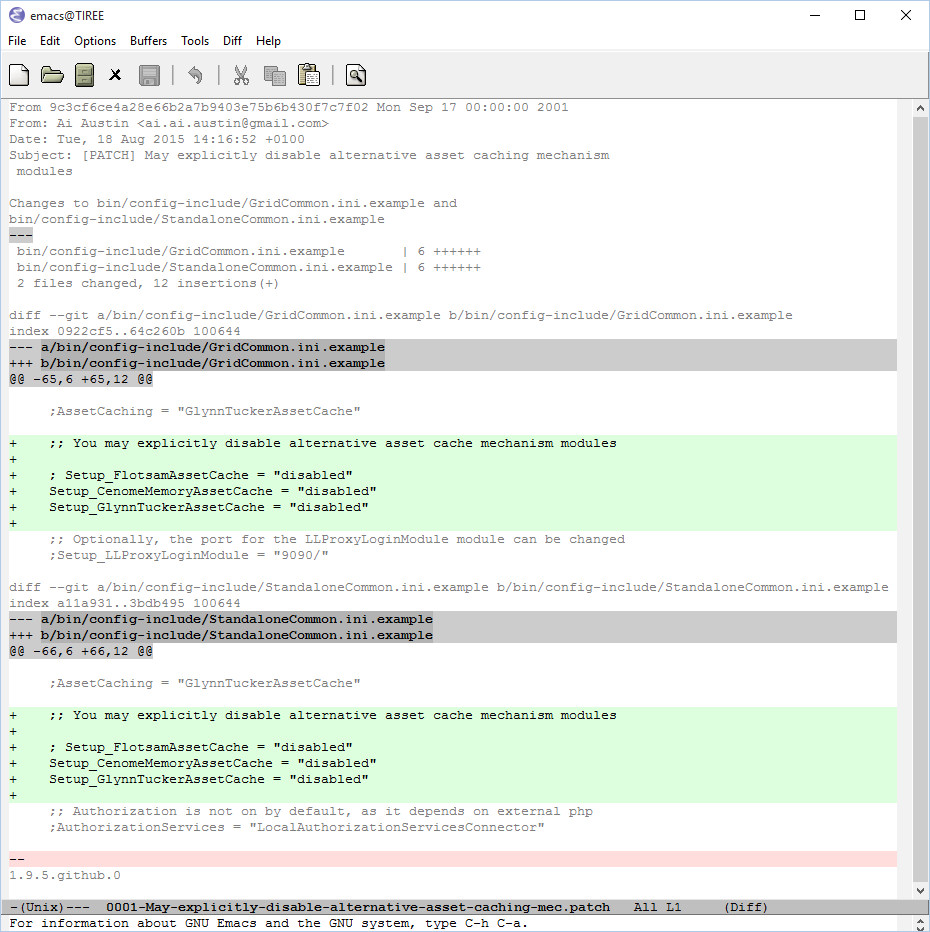 Submitting a Patch to the OpenSimulator Community

OpenSim Core Developer Sign Off of a Contributed Patch

An OpenSim Core developer with appropriate permissions to commit directly to the remote master copy of OpenSim at http://opensimulator.org/viewgit/ may use a command such as the following to “sign off” a contribution…

As explained above, as a non-core developer you cannot directly commit changes to the remote master version of OpenSimulator. You are contributing potentially useful patches which might or might not be adopted. This can mean you have to constantly keep changing your “mods” branch to keep it in line with other changes in master. I tried to maintain a simple setup by using “revert” on each commit on the “mods” branch after creating the patch. A revert of the last commit (or any commit in fact) on the “mods” branch can be made very simply by selecting the commit and using the “Revert” button. But it turns out that this process does not allow “clean” patches to be successfully generated. The patches when applied try to refer to the commits/reverts that were in the branch history but not passed to the remote repository and give this message…

sha1 information is lacking or useless

Instead, I found its best to DELETE the “mods” branch entirely, using… (the capitalised -D flag forces the delete, so ensure you want to do that)…

Then go back and cerate a new branch “£mods” and work afresh in that for the next patch you wish to contribute.

Without a lot details, this is a short summary how it works. Git is a distributed repository of every change. If Github went away, anyone with a git clone of the repo still has a complete copy of it along with every change, including any deleted files. This is one of the reasons why we must be careful to only commit properly licensed items in git. It will be there forever.

You install the git program from https://git-scm.com/ on your PC using the defaults. Git has its own DOS-like command box as well as a GUI. For example, to start on the Ruth/Roth Git repository, you shift-right click an empty folder and select “Git Bash Here”. In the box that appears, you type git clone https://github.com/RuthAndRoth/Ruth.git

It will fetch and give you a copy every change ever made. You can repeat this at any time the latest version by typing ‘git pull’. This is about the only reason to use the DOS box for beginners. So you can close it.

You make any changes you want to that folder. Add, delete rename, edit. You should keep your changes as a unit – e.g., do one unitized thing at a time. Then ‘commit’ the changes. For example, make a new folder and put stuff in it. Or edit and save a Blend file. Each commit is recoverable. So if you commit a mistake, no worries, just fix it, and commit a corrected version. Each commit requires a simple comment so people know what that commit has in it.

One huge advantage of git is there is no need to keep saving more and more copies of a Blend that is a work in progress. Or keep old stuff that should really be deleted. One copy of something is usually enough, so long as you commit it often, as git will remember every one you commit. So if you really screw up, you can always check out an earlier version and work from there.

After each change, you should use the Git GUI to commit it. Right click the folder and select Git GUI Here.

There are buttons at the bottom to rescan the disk for changes you made. Stage them to the “Will commit” box, which sets them to be committed as a batch. You can stage and unstage with keystrokes or a menu until you have the files you want in one batch. I often forget to commit, so I can break up the changes and commit them separately.

Sign it, then Commit it to your local PC’s copy of git. You can commit many things there, and keep a local history of all your changes.

When you are ready for the github to have a copy, click “Push’ to push the changes to the github.

This entry was posted in OpenSim and tagged Git, OpenSim. Bookmark the permalink.