This post provides links and resources related to a number of free to use avatars that can be inserted into Unity 3D projects to provide third person views of a character able to move through a scene. The avatars, scripts, animations and other resources are provided either as open source for flexible use and/or with non-commercial use licences use.

Unity 5 includes a character “Ethan” in the standard Assets at Assets/Standard Assets/Characters/ThirdPersonCharacter/Prefabs folder which can be included in a Unity scene. The “Main Camera” can be dragged inside the “ThirdPersonController” hierarchy and it is then attached to the motion of the character. See also these notes to replace the 3D model with other FBX avatar rigged meshes that are in a suitable format. 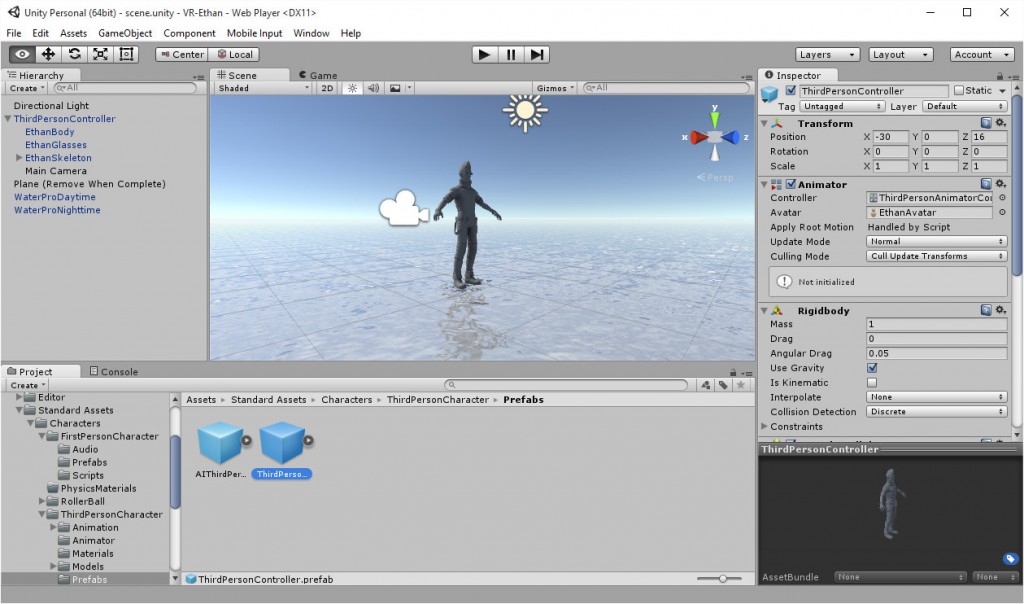 Replacing Ethan with other Avatar Models and Avatar Cameras

See the notes in Unity’s Assets -> Standard Assets -> Characters -> ThirdPersonCharacter folder on how to replace the Ethan character’s 3D model with other FBX avatar rigged meshes that are in a suitable format. The following blog post also covers this process.

The Open Source Blender Project “Sintel” avatar has been used in a number of open source projects and a version is available to use as an avatar or character in Unity. E.g. from http://u3d.at.ua/ where you need to register before being able to obtain the free download. 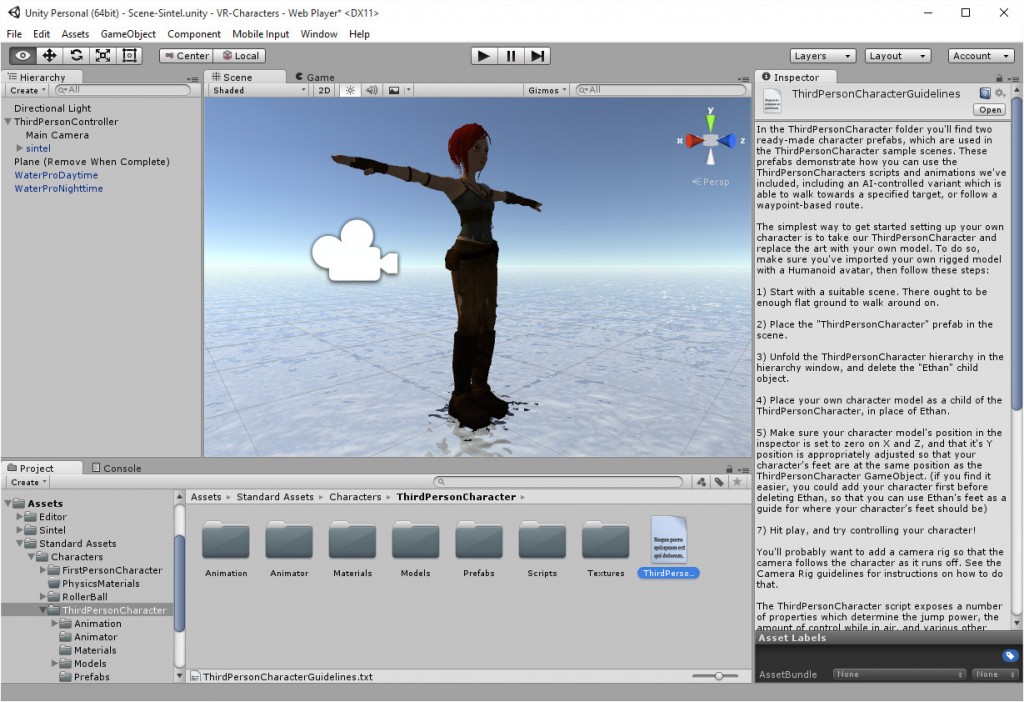 It can be use to replace the Ethan visual model as described above. Just delete the Ethan visual model elements (EthanBody, EthanGlasses and EthanSkeleton) and insert the Sintel model instead. Then select the original Ethan “ThirdPersonController” and in the Unity Inspector change the Animator -> Avatar to the “SintelAvatar” you have included. 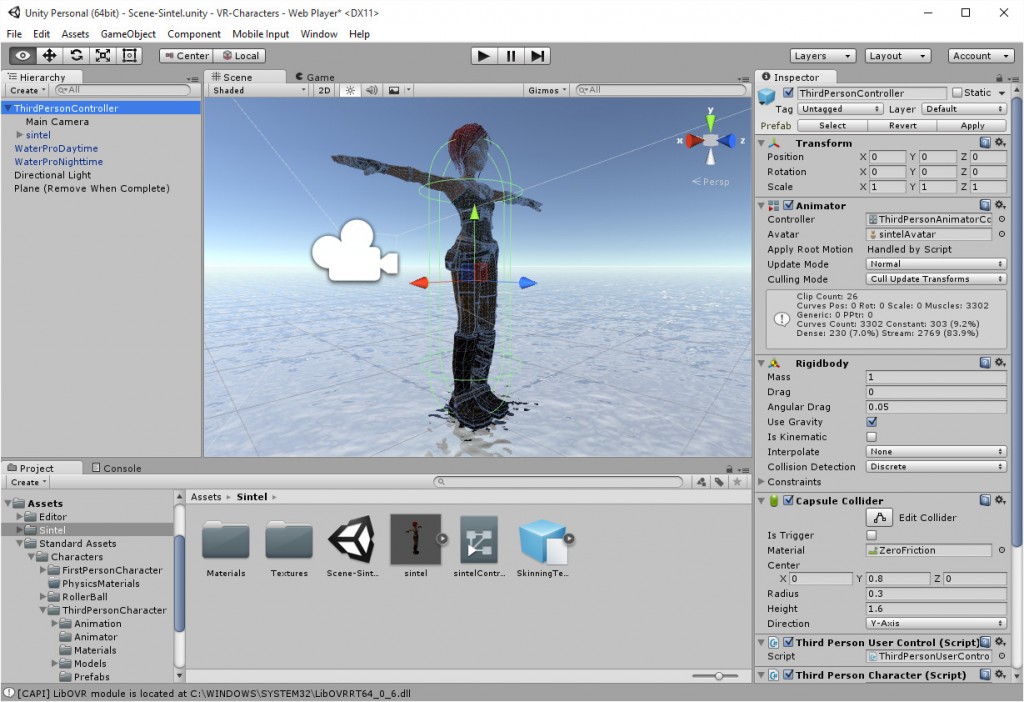 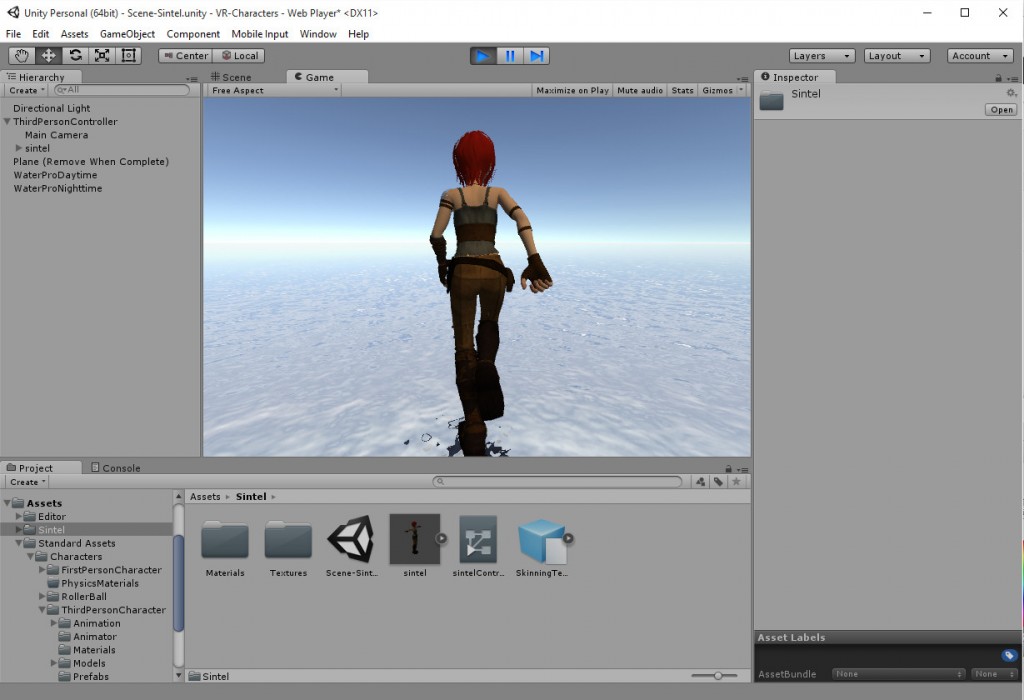 Morph3D provide Unity assets for Male and Female characters that are very adjustable. There are free (Lite) and more capable paid versions. See https://www.morph3d.com/. There is a Unity3D Forum thread on Morph3D. A PDF guide is available from there at Documentation. Information on a Morph3D addon content creation system is here. Umotzkan (o3n Games) has provided a helpful tutorial on using the Morph3D figures here. 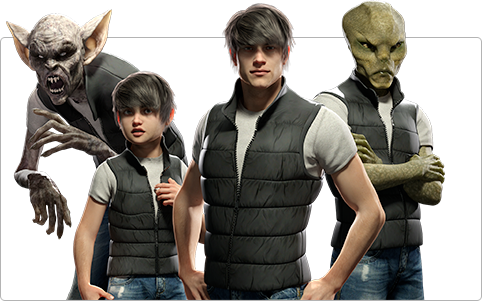 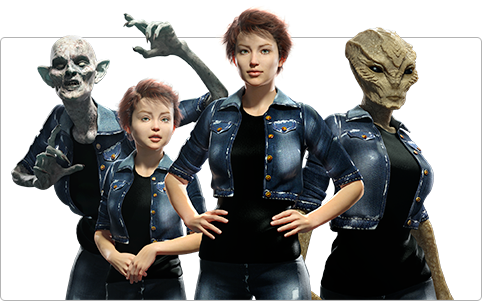 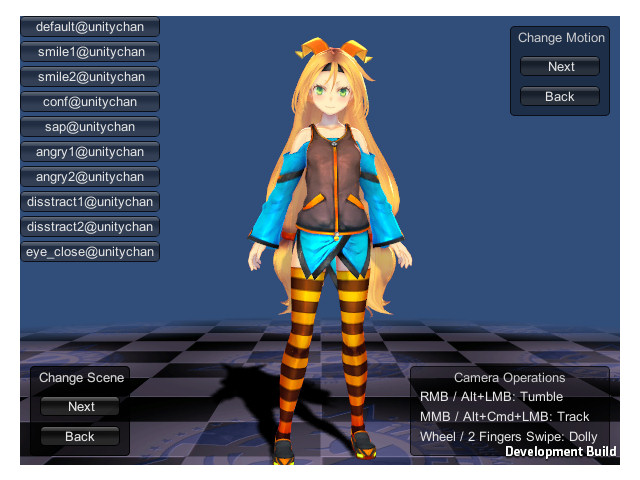 Unity-Chan – The Unity-Chan anime style character provided for non-commercial use that can be inserted into the converted Unity scene to give you an avatar to move through the scene. It is included in the Unity3D folder that is in the OpenSim OAR Converter (OARConv) distribution described in this post. 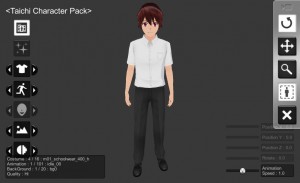 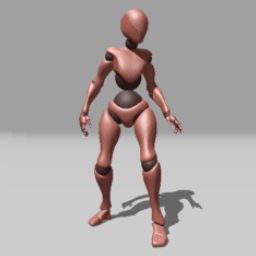 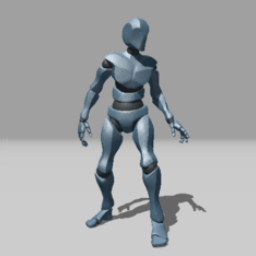 Mixamo has a number of free character models, including their “X-Bot” and Y-Bot” robot style reference characters. Search, for example, under “Characters” for “Bot“. You can download those as FBX for Unity with “T-Pose”, import them as the visual model for an avatar with a suitable character controller in Unity… remembering to check the “Rig” animation type is “Humanoid”. “Generic” (the default) as the animation type for the FBX appears not to work with animators I tried. You also need to ensure that the “Animator” component of the ThirdPersonControler you use actually has it’s “Avatar” slot set to the appropriate avatar FBX you used. If the avatar sticks in T-Pose when you test it, its likely that you did not set the ThirdPersonController Animator Avatar slot correctly. 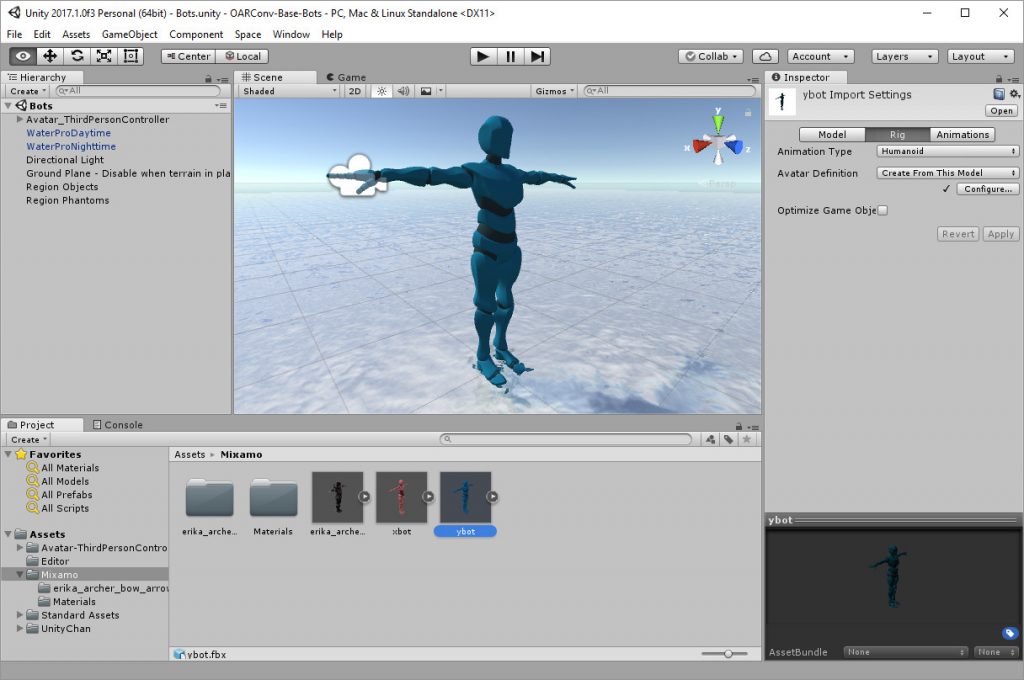 The X-Bot and Y-Bot models have also been imported into OpenSim for use in virtual worlds… distribution boxes are out at
hop://hg.osgrid.org:80/Vue-Port/150/110/21 and the Blender origination file and OpenSim Inventory Archive (.iar) are available at http://openvce.net/resources/downloads/Bots/