On 1st July 2016 Linden Lab released a first version of their Oculus Rift Viewer version 4.1.0.313313 which is meant to work with the newer Oculus runtime 1.3 and hence to support the CV1 consumer version of the Oculus Rift. The previous version of the Second Life Oculus Rift project viewer version 3.7.18.295296 was only for for the Oculus development kit versions (DK1 and DK2) and has been reported on in previous blog posts. It was working quite well with those earlier versions, most UI issues had been addressed, and it was perfectly usable. See e.g. this blog post for a report on using an early build test version to provide feedback just before that release, and all the issues outstanding were dealt with by the time the user release was made.

On first starting up the new release my impression was that I had the wrong installer. So much is not working or wrong. Feedback is being provided to Linden Labs by others as so much seems incorrect. Reporting individual issues via the Second Life JIRA does not yet seem to be the appropriate route until the fundamental problems are established.

To provide the images illustrating issues in one place I am making this blog post in the interest of rapidly getting the problems fixed.

There is a security certificate issue with the download itself.

The release notes at http://wiki.secondlife.com/wiki/Release_Notes/Second_Life_Project_OculusRift/4.1.0.317313 seem to not have been fully checked.

The release notes also still refer to “turning low persistence mode on and off” but this settings no longer appears in “Settings” -> “Move & View” -> “Head Mounted Display”.

I always add the “HMD Mode” button available in the Rift project Viewer to my viewer user interface to make switching back and forth easier than using the keystroke equivalent (Ctrl+Shift+D).

In all cases and with all graphics settings I have tried, on both DK2 and CV1 setups, the HMD view is over bright and washed out pastel in colour. This is in the HMD itself rather than the on screen 2D monitor split screen images I will present below, which are normal colour. A “Pixel Luminance Overdrive” setting existed in the previous release which is now no longer present in settings might be worth checking. But just this alone means its odd this release got through basic testing.

With the default setup after install, it seemed that many objects were missing. See the scene illustrated in the 2D monitor view shown in the left hand image and the HMD view on the right. This turned out to be ALL objects with transparency or partial transparency, whether in the scene (such as the hot tub water) or worn in attachments on the avatar (like some elements of hair). 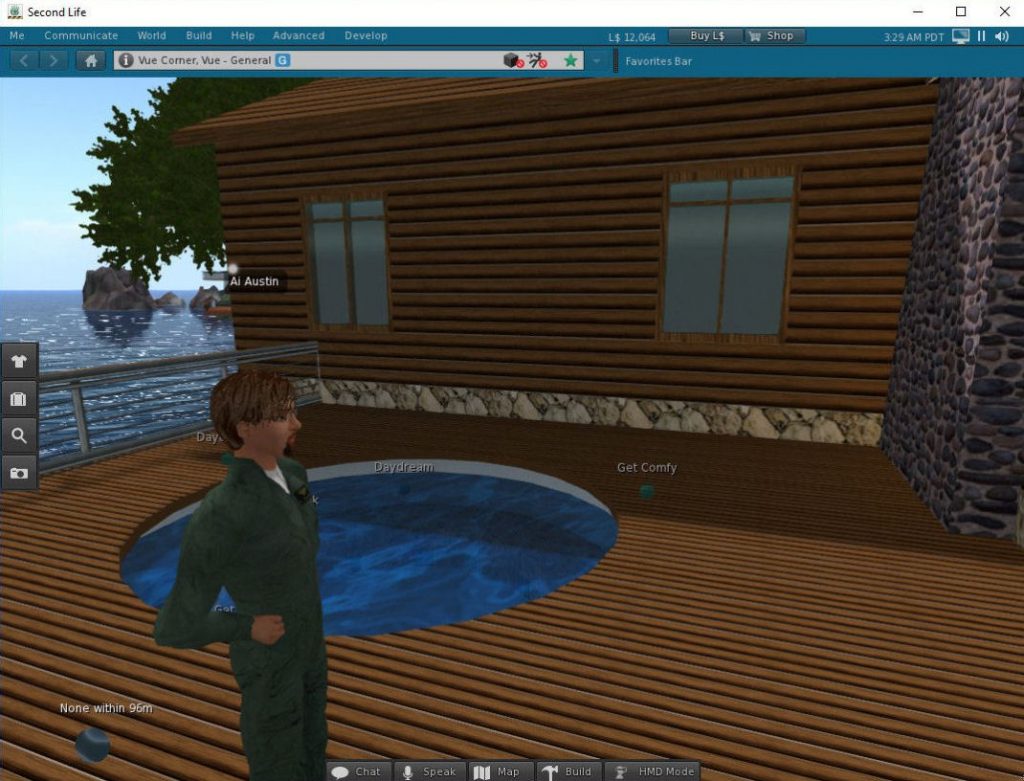 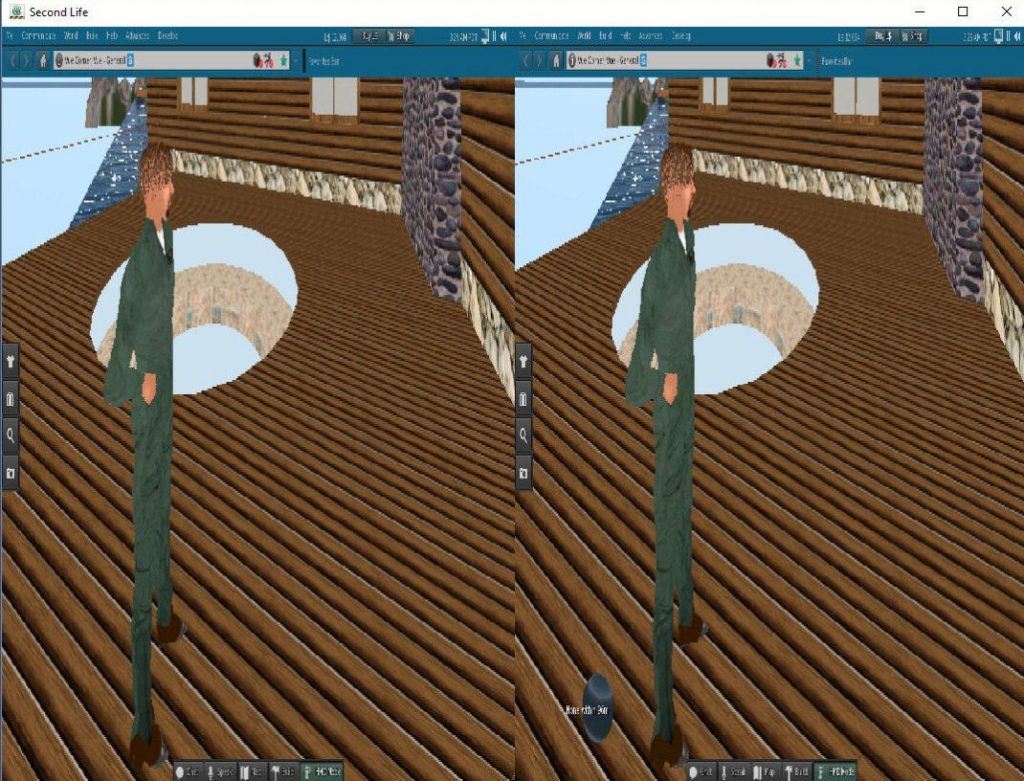 The hot tub water is a missing partially transparent object by the way, not the usual sea level “Linden Water”. The right hand HMD Mode image shows BOTH a sea patch drop out issue (to top left corner of image and described more fully below) and the missing transparent object issue.

Particles do work fine, so long as you have turned off one of “Atmospheric Shaders” or “Advanced Lighting”.

When set to “Low” graphics in HMD mode I just get solid red in the left eye and solid blue in the right eye, no 3D objects at all. 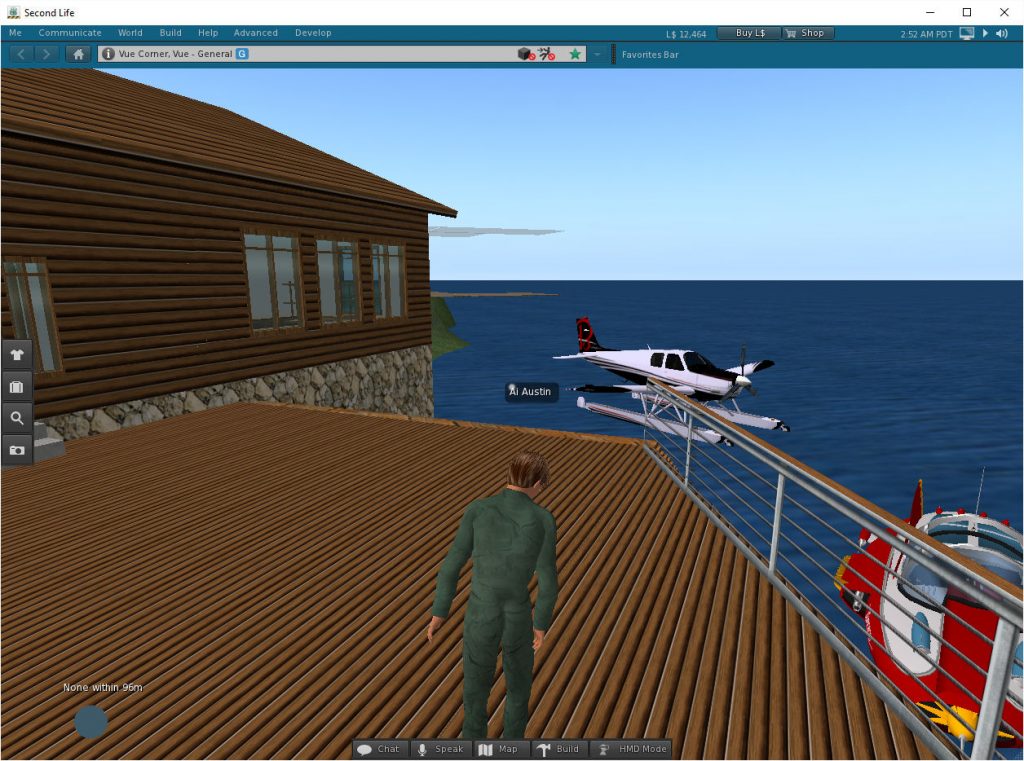 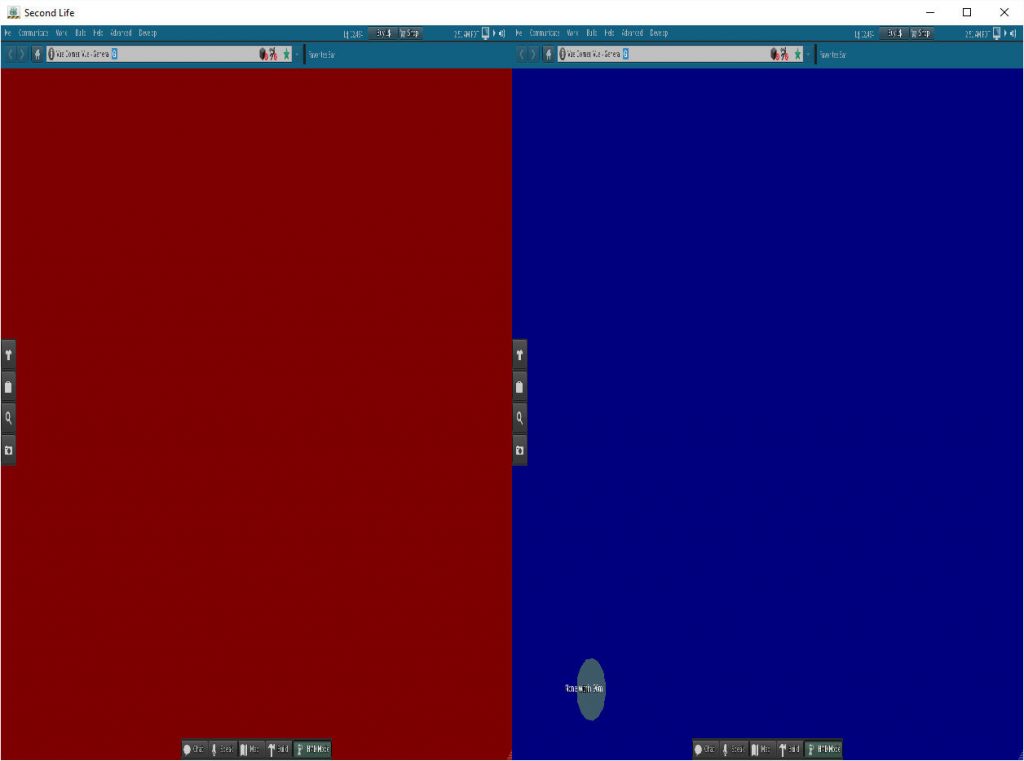 The quality of the image in the HMD is very low indeed, and much worse than the previous release. Its unusable as it stands. Changing graphics settings appears to have no effect on this.

UI Elements in Fixed Position and Not Changeable Via Settings

Depending on the size of your 2D Second Life window before you enter HMD mode, the main Second Life menu bar appears in a fixed position, flat and not all visible. With a small initial window it appeared right across the middle of the HMD view. With a full screen 3D view before entering HMD Mode it appears very might up in the field of view.

Changes in “Settings” -> “Move & View” -> “Head Mounted Display” appears to have no effect on the UI elements in HMD mode at all. This is the case even after save, entering and leaving HMD mode or even after restarting the viewer.

Labels over Objects and Avatars Do Not Show

In the HMD Mode, all (?)objects and avatar labels appear to be missing, whether or not the UI is toggled on or off (Ctrl+Shift+U). This would make normal meetings and interactions impossible.

The mouse cursor does not show when in the HMD Mode. It can be seen on the 3D monitor split screen view when in HMD Mode, but not in the HMD itself.

The mouse however even when trying to use it on the 2D split screens is not operating anywhere near where the pointer appears, so far way objects are selected when hovering over seats for example. None of the object right click menus therefore work correctly, and no object interaction icons appear to work.

There are strange rotations of the camera if you enter and leave UI show/hide with Ctrl+Shift+U. But this key combination only affects the 2D split screen view and not the view in the actual HMD, and does not remove the blue main menu which can be right across the main view.

Interaction Icons Do Not Show

Icons that should show when hovering over suitably set objects, such as the Sit icon for seats do not show in the HMD Mode in the HMD itself or even on the 2D monitor split screen view.

Sea Patches in Some Cases are Light Blue

In the HMD view, one or more sea patches (for whole regions) show as light blue rather than the correct water surface. These used to occur in the main viewer with Object Occlusion set on, but was recently fixed. It may just be a bad case of the same “Z fighting” issue reappearing given the low resolution of the HMD image. 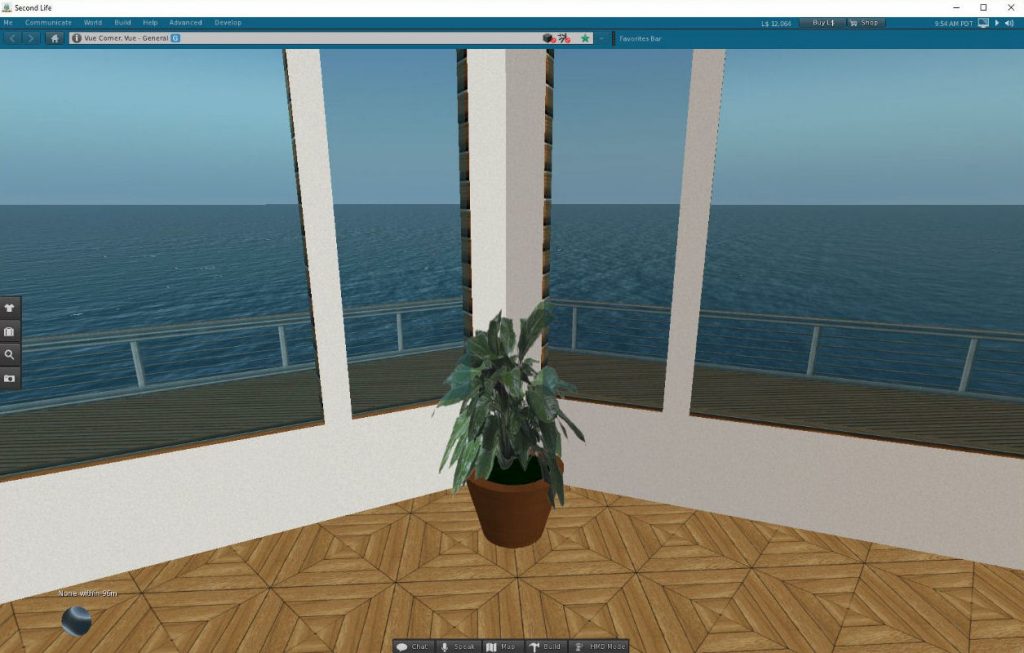 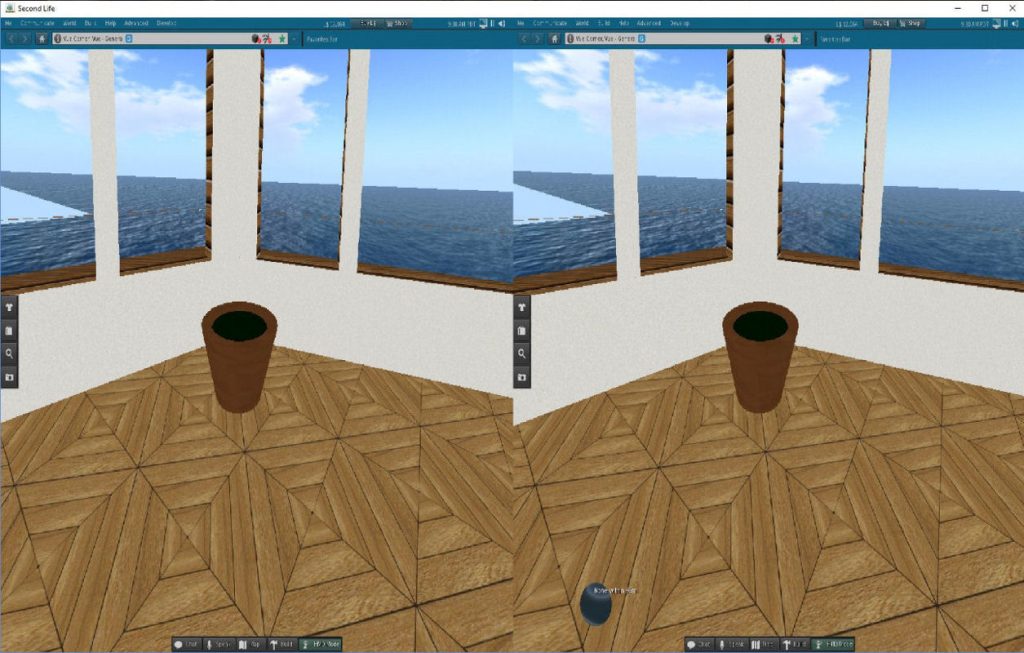 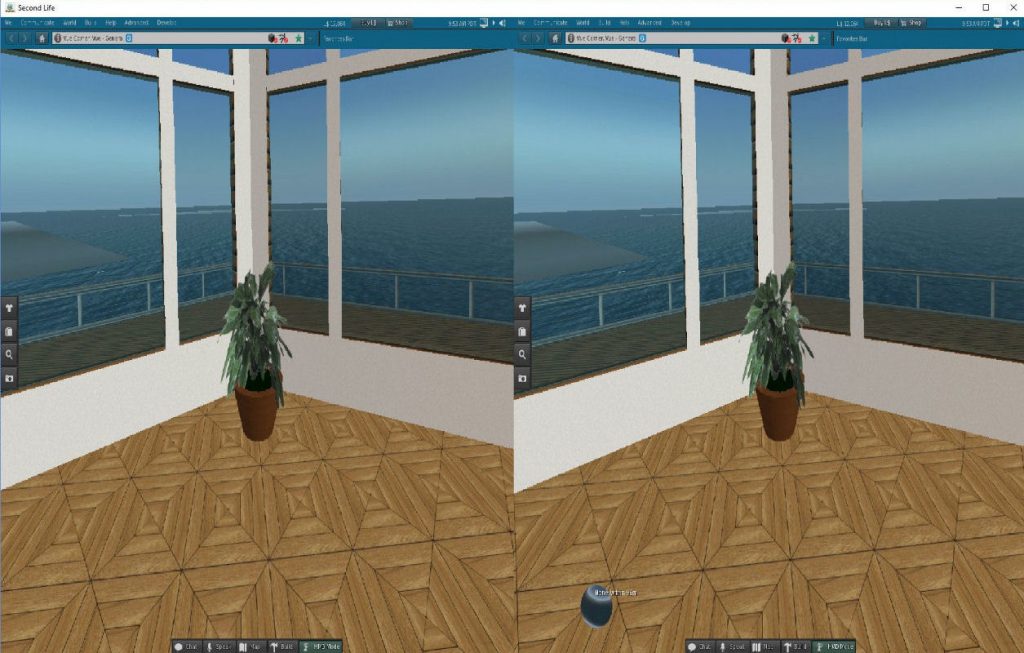 This issue occurs with the Atmospheric Shaders on (left hand image) and with Atmospheric Shaders off (as in the right hand image where the closer up patch is a darker blue, but a far off region near the horizon also shows as light blue). Click on the smaller thumbnail images to see the full resolution versiosn to illustrate this more clearly. Both these HMD mode images illustrate the sea for adjacent and sometimes also further away regions showing as light or dark blue patches rather than the proper sea surface.

Objects Near Edge of HMD View Not Shown

Objects (or parts of linked objects) near the edge of the field of view in HMD mode disappear before they are out of the actual view. If you move your head to a specific angle they can even flash very fast. 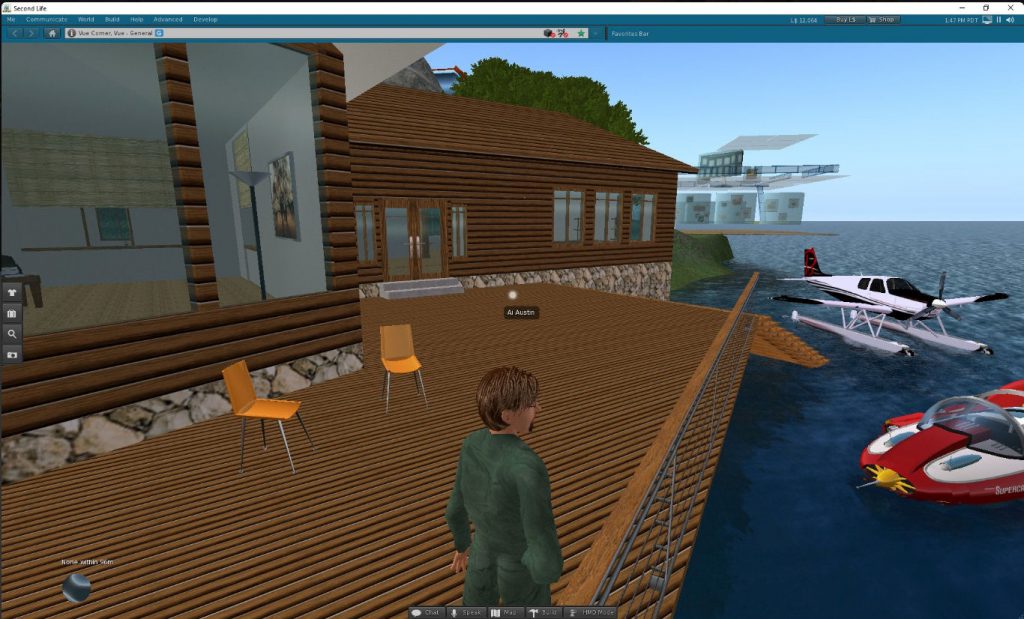 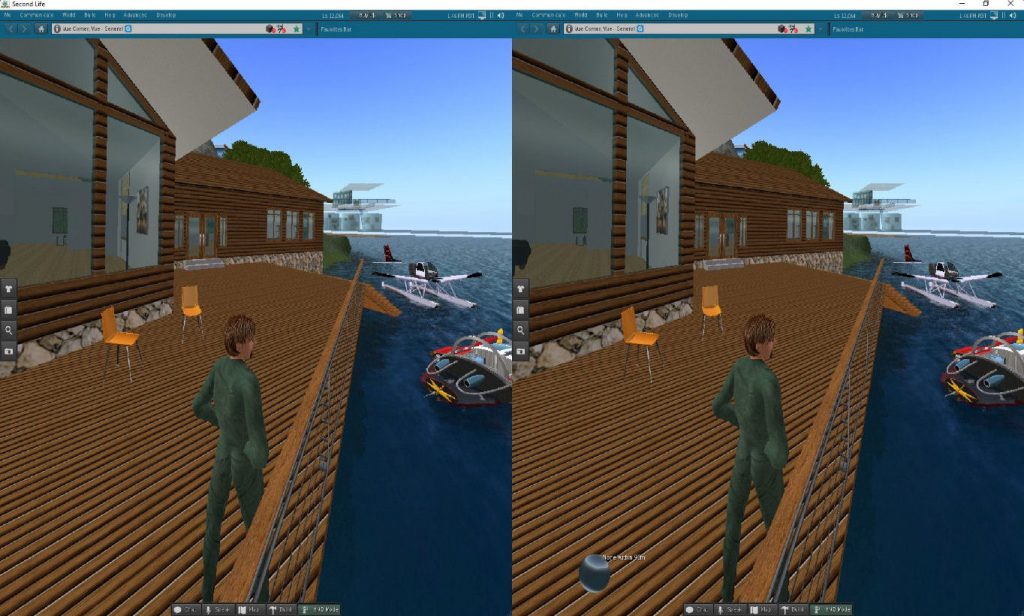 When in HMD mode, the viewer maintains the two view split screen 2D monitor mirror of older Oculus Rift setups. Oculus SDK 1.3 provides a single more usable screen which is more helpful for some types of user interaction with the 2D view, chat tools and when interacting via the mouse or keyboard as is necessary in Second Life.

Some testers have indicated they are not seeing 3D VR in the HMD at all. There may be some confusion if you have not got past the stage where Oculus Home is running (normally launched when you first enter the viewer, remembering that for the DK2 that must be switched on before you run the viewer) and where you have accepted the health warning. You may get a message saying that the viewer is not communicating as its waiting for the first time you enter HMD Mode. After all that you should see 3D/VR in the HMD, and I certainly see 3D/VR properly on my DK2 and CV1 rigs.

Note that a giant 2D screen wall of the normal 2D monitor view appears in the HMD when you are NOT in HMD Mode. Possibly only after you have been in HMD mode once (to sync properly with Oculus Home as described above). But you must be in HMD mode for proper 3D/VR.

All issues occur on both the DK2 and CV1. But there is an additional problem in the CV1 in that the UI layer and the 2D cinema screen view when not in HMD mode appears to be flipped or reverse between the two eyes, so its difficult to focus on in the CV1 unless you close one eye.

Clearly something has gone wrong with this release, or some basic settings need switching to make the release work as expected. These notes are provided in the hope the fixes can quickly be identified and a replacement release provided to let us get back into Second Life in VR.

Thank you for experimenting with our Oculus Rift Project Viewer and offering your feedback. Unfortunately, the Project Viewer that we recently made available didn’t meet our standards for quality, and so we’ve now removed it from the Alternate Viewers page.

By definition, Project Viewers aren’t ready for primetime. The purpose of these experimental Viewers is to share with you the earliest possible version of what we’re working on, so that you can see what we’re up to, help discover problems, and provide feedback. In this case, though, we’re not ready for that, as those of you who tried it have seen.

We can’t say at this point when or even if we may release another Project Viewer for experimenting with the Oculus Rift in SL.

We want to prioritize our development efforts around initiatives that we know will improve the virtual world and bring more value to SL Residents, and due to some inherent limitations with SL, it may well not be possible to achieve the performance needed for a good VR experience. (In fact, this is one reason why we’re creating Project Sansar a new, separate platform optimized for VR).

We greatly appreciate the interest in trying SL with the Oculus Rift and are grateful that several of you took the time to try the Project Viewer. We regret that the quality was not up to our standards, and we will of course keep the community posted if we release a new Project Viewer for VR in the future. 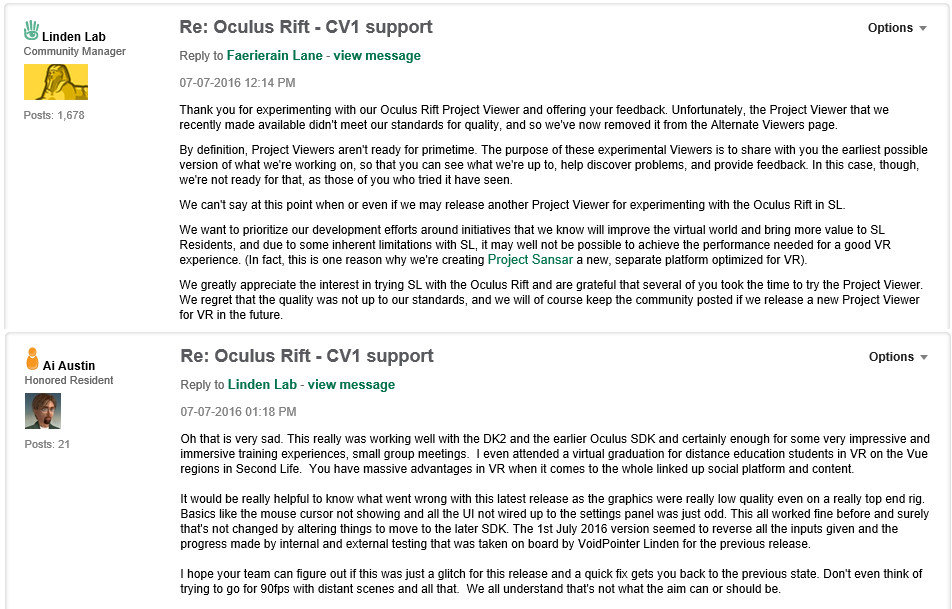