CtrlAltStudio is a version of the virtual worlds viewer for Second Life and OpenSim created by David Rowe. It has been updated to CtrlAltStudio 1.2.6.43402 to run with the Oculus Rift CV1 (as well as the previously supported DK2) under Oculus Runtime 1.5.0 (and subsequently tested with 1.6.0).

Note that this release is based on Firestorm 4.6.9 with hotfix 42974 which were released in December 2014. There have been many improvements in Firestorm and other viewers since then that are not included in CtrlAltStudio Viewer. Unless you really need Oculus Rift or stereoscopic 3D support you should seriously consider using another viewer instead. Linden Lab’s cashier update of 15th Jun 2016 (TLS 1.2 enforcement) is not supported when using the built-in web browser (e.g. trying to purchase from the Marketplace). However, user/user transactions, transactions via in-world vendors and L$ purchases via the button in the top right corner of the viewer will still work.

Other advice may be useful in some setups:

These additional tips may no longer be active in the latest viewer (to test):

The CtrlAltViewer uses a version of the Firestorm viewer which uses a “GPU table” to identify the initial settings to use for graphics. This mechanism is replaced by a more dynamic scheme in more recent viewers. But if your graphics card is new it might not have an entry in the GPU table. Examples of recent graphics cares not included in the original GPU table include: Nvidia GTX 1060, 1070 and 1080 and Radeon RX 480. this can cause the image to appear black when in the 3D Riftlook view. You can manually enter one yourself for CtrlAltStudio if necessary at C:\Program Files\CtrlAltStudio-Viewer-Alpha\gpu_table.txt.

Early reports indicate that the UI overlays work on the DK2 but are out of focus or have the eyes reversed on the CV1. It can appear okay of you only look through one eye.

For the UI, you can edit the following file to increase the min/max values of the “UI Depth” slider in the Viewer > Preferences > Display Output > Oculus Rift settings: C:\Program Files (x86)\CtrlAltStudio-Viewer-Alpha\skins\default\xui\en\panel_preferences_graphics1.xml. Near the end of the file there’s a control “RiftUIDepth”: and you can adjust the “min_val” and “max_val” values. After you change the values in the .xml file you have to restart CtrlAltStudio viewer, then go to Viewer > Preferences > Graphics > Display Output > Oculus Rift and then adjust the UI Depth slider. 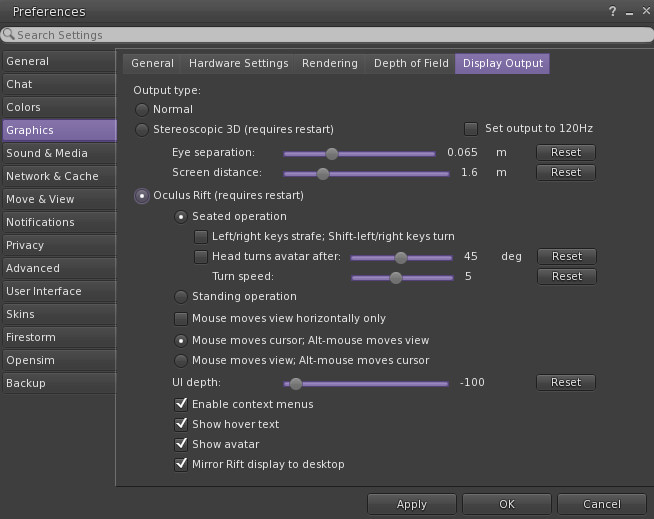 User feedback testing CtrlAltStudio 1.2.6.43402 suggests changing the min_val to: -120 (from 0) and that the Oculus CV1 starts to focus at -80 and below. From there you can adjust it to your taste. A RiftUIDepth of -100 appears to be a reasonable starting position to try for the CV1 (+100 is the default initial value for the DK2).

The cursor being visible in only the left eye is intentional behaviour. David Rowe reports that it is a “hack” that lets the cursor hover over UI elements and in-world objects correctly without needing complex code to sort out what depth to place the cursor at. 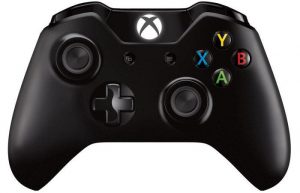 Xbox 360 controllers (wired or wireless) work fine. But Xbox One controller (wired or wireless) moves you vertically up without touching any control. The X-Box One controller seems to have an issue that causes the Z Axis and Z Rotation to be at a 0 value at all times until the button is pushed rather than 50%. This causes the in game Y axis to be always activated. This causes the Xbox One controller to have different mappings of its physical controls to driver outputs. In Windows’ Control Panel > Devices and Printers > Xbox Controller > Game Controller Settings > Properties the 360 has a single “Z Axis” which the left and right triggers both control, whereas the One has separate “Z Axis” and “Z Rotation” for the two triggers.

** How to Boost Rift Image Quality with the Oculus Debug Tool

The following notes on “How to Run the Oculus Debug Tool to Improve Image Quality” are from http://www.roadtovr.com/improve-oculus-rift-game-image-quality-using-this-tool-oculus-debug-tool/

Use with the HTC Vive

Some users have reported that the CtrlAltViewer set to use the Oculus Rift works with the HTC Vive using LibreVR/Revive. This is a compatibility layer between the Oculus SDK and OpenVR. It allows you to play Oculus games on your HTC Vive.