CtrlAltStudio is a version of the virtual worlds viewer for Second Life and OpenSim created by David Rowe. It has been updated to CtrlAltStudio 1.2.6.43412 [Codeplex Archive] to run with the Oculus Rift CV1 (as well as the previously supported DK2) under Oculus Runtime/SDK 1.5.0 (and also tested with 1.6.0). It does not work with the Oculus DK1 as that is not supported by recent Oculus Runtime/SDK code.

Note that this release is based on Firestorm 4.6.9 with hotfix 42974 which were released in December 2014. There have been many improvements in Firestorm and other viewers since then that are not included in CtrlAltStudio Viewer. Unless you really need Oculus Rift or stereoscopic 3D support you should seriously consider using another viewer instead. Linden Lab’s cashier update of 15th Jun 2016 (TLS 1.2 enforcement) is not supported when using the built-in web browser (e.g. trying to purchase from the Marketplace). However, user/user transactions, transactions via in-world vendors and L$ purchases via the button in the top right corner of the viewer will still work.

David Rowe also notes… the viewer is not optimized for VR — the FPS is not really high or consistent enough for “proper” VR. Some people are more sensitive to such rendering issues than others; however, it does let you get a taste for what user-created VW’s like Second Life can be like in VR.

Note that CtrlAltStudio is no longer available as it is based on an outdated version of Firestorm. The links below are left in place for historical purposes, but no longer work. The Internet Archive Wayback Machine provides an archive of the resources for developers interested in the approach taken.

The 1.84GB .zip archive is an archive dump at the Microsoft Codeplex level with all binary releases, the source code, and any metadata like issues.

@humbletim provided a more accessible GitHub read-only archive of the contents of the final version of CtrlAltStudio Viewer 1.2.6.43412. 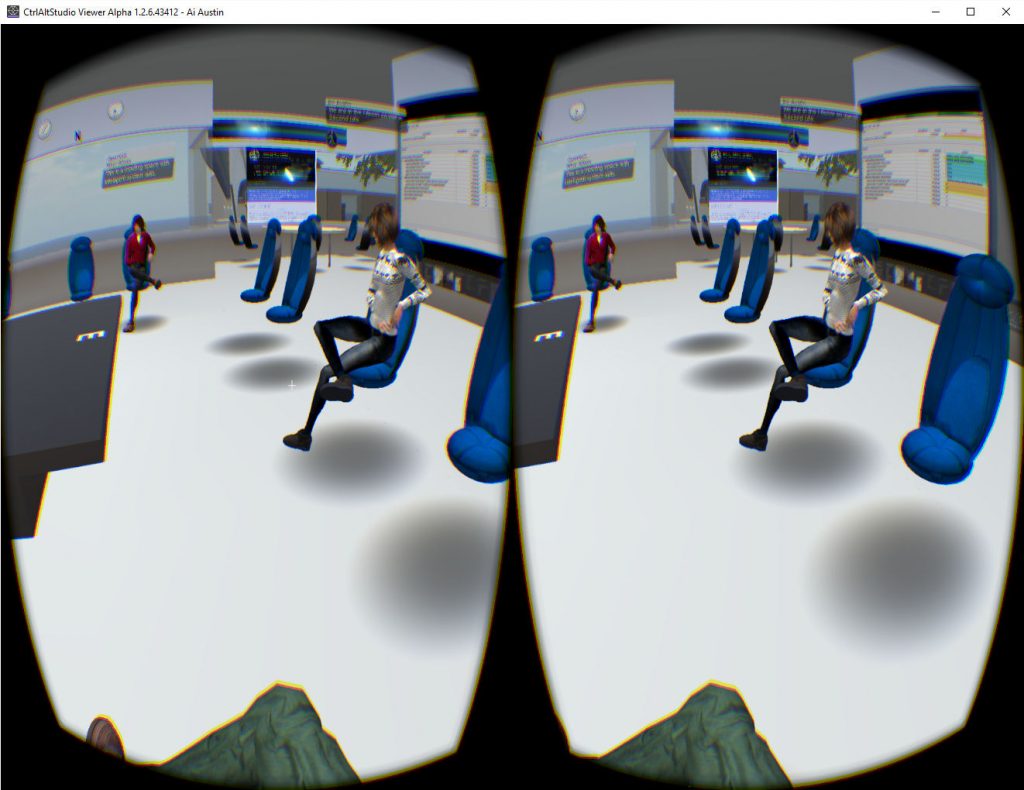 The interior of the Vue I-Room above also shows avatar text chat using overhead speech bubbles which is useful when in the Riftlook/3D view. 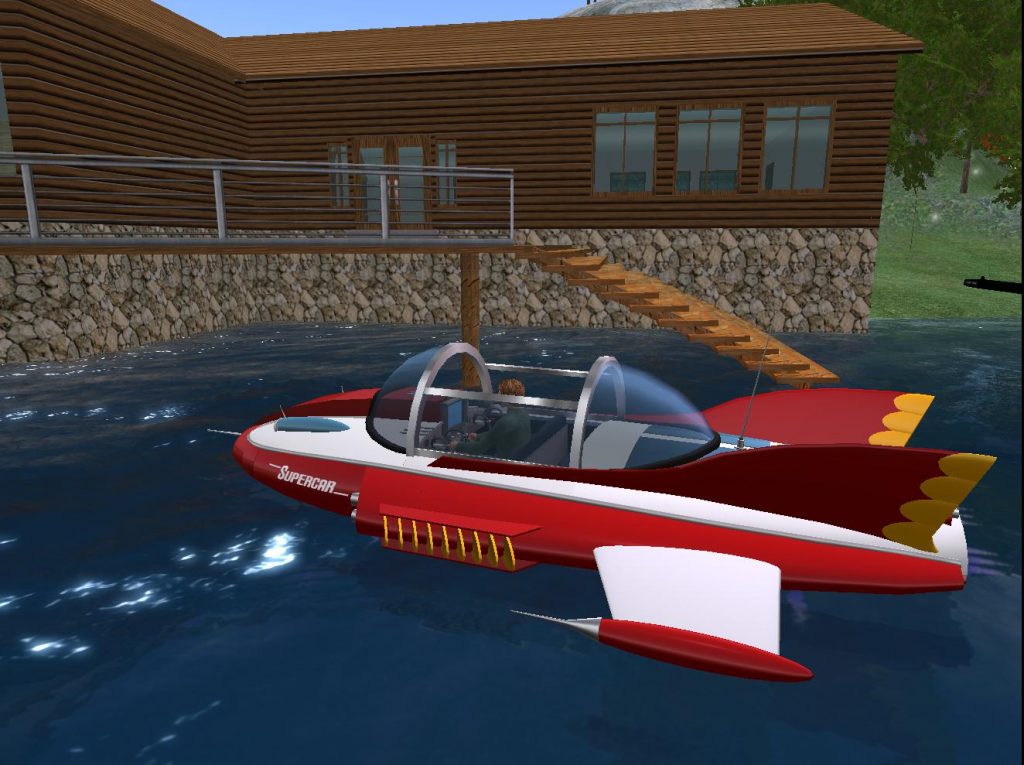 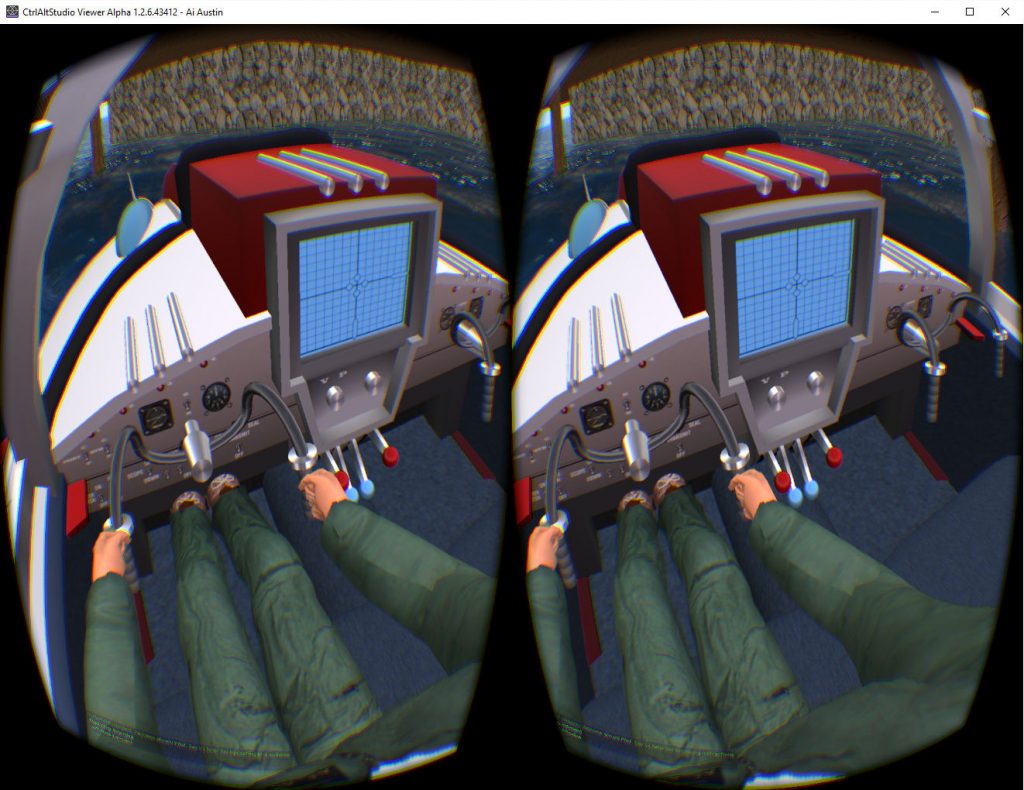 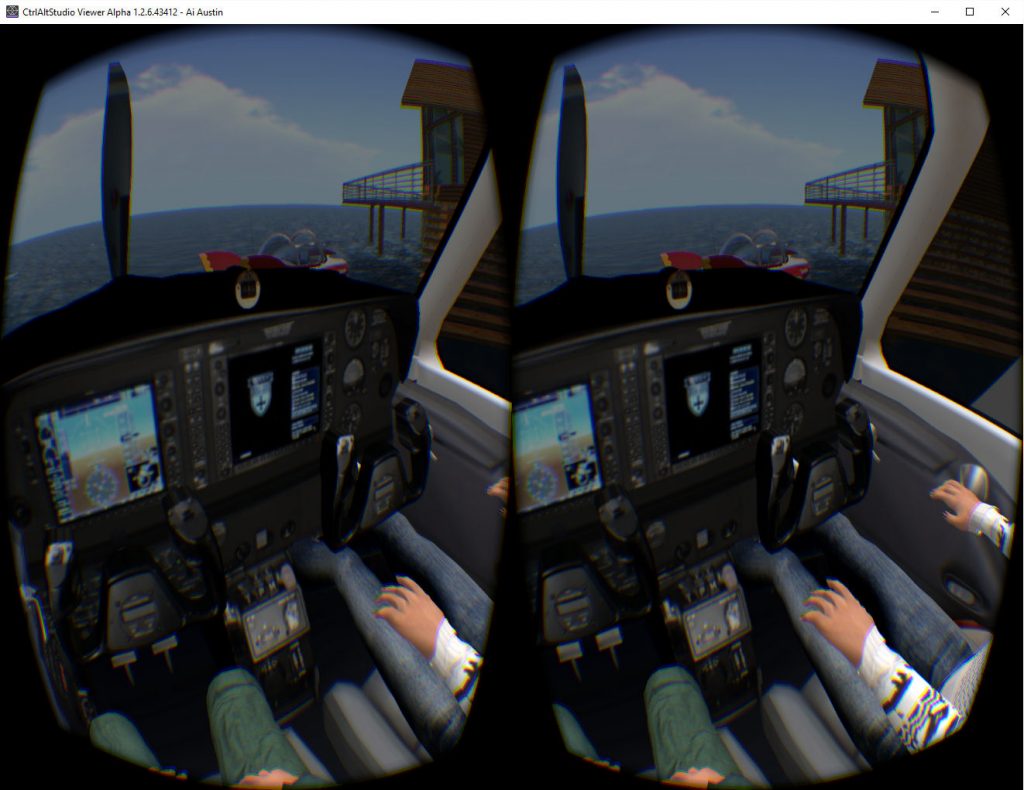 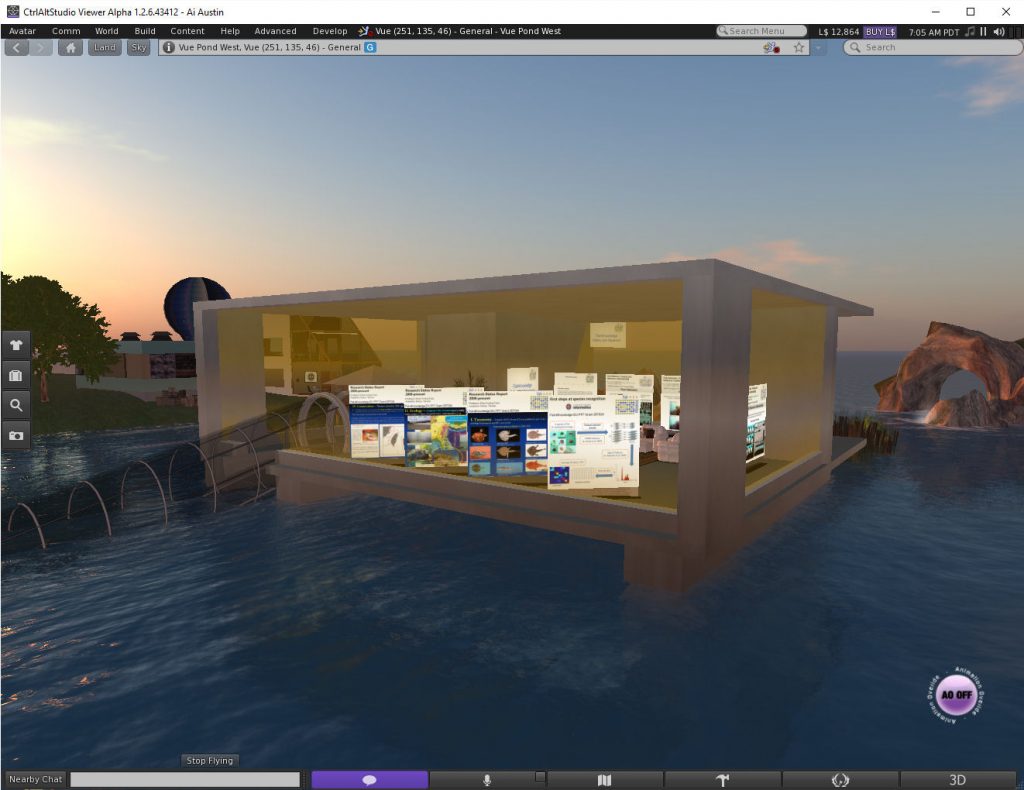 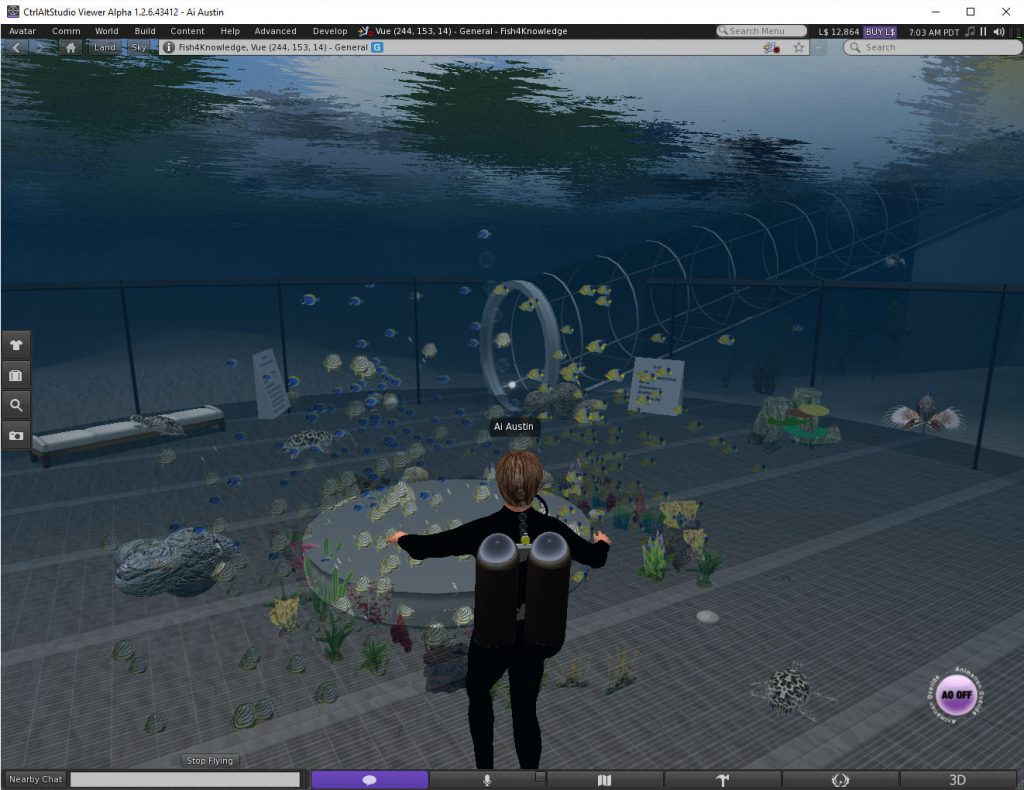 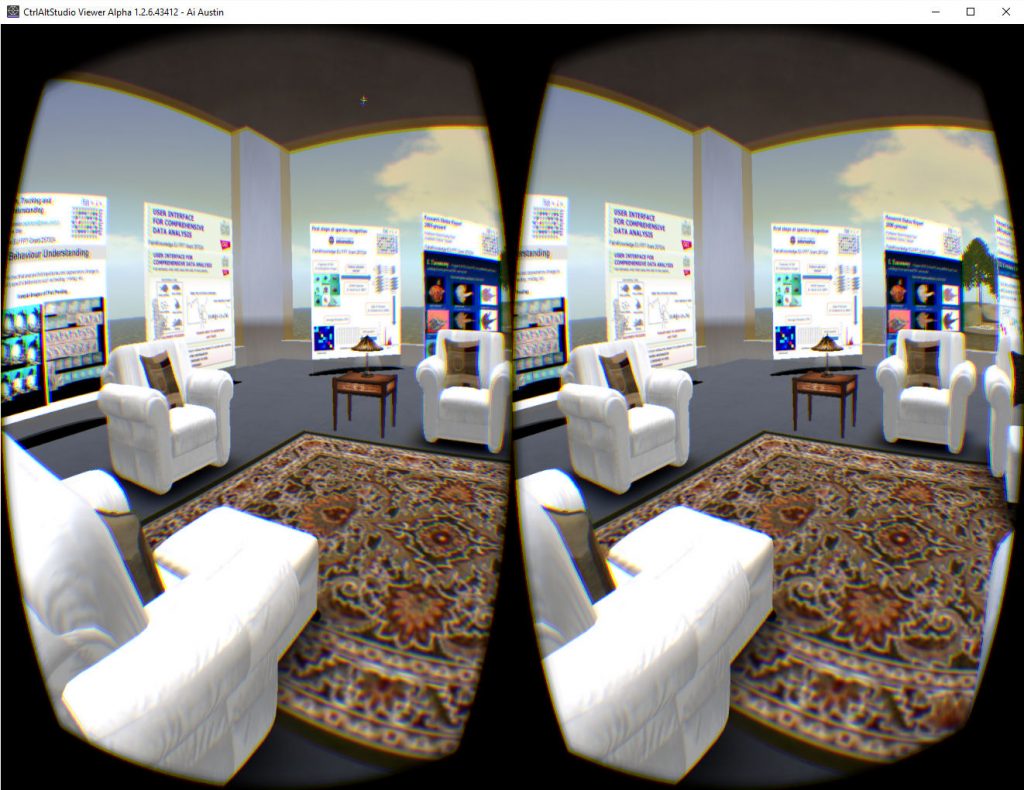 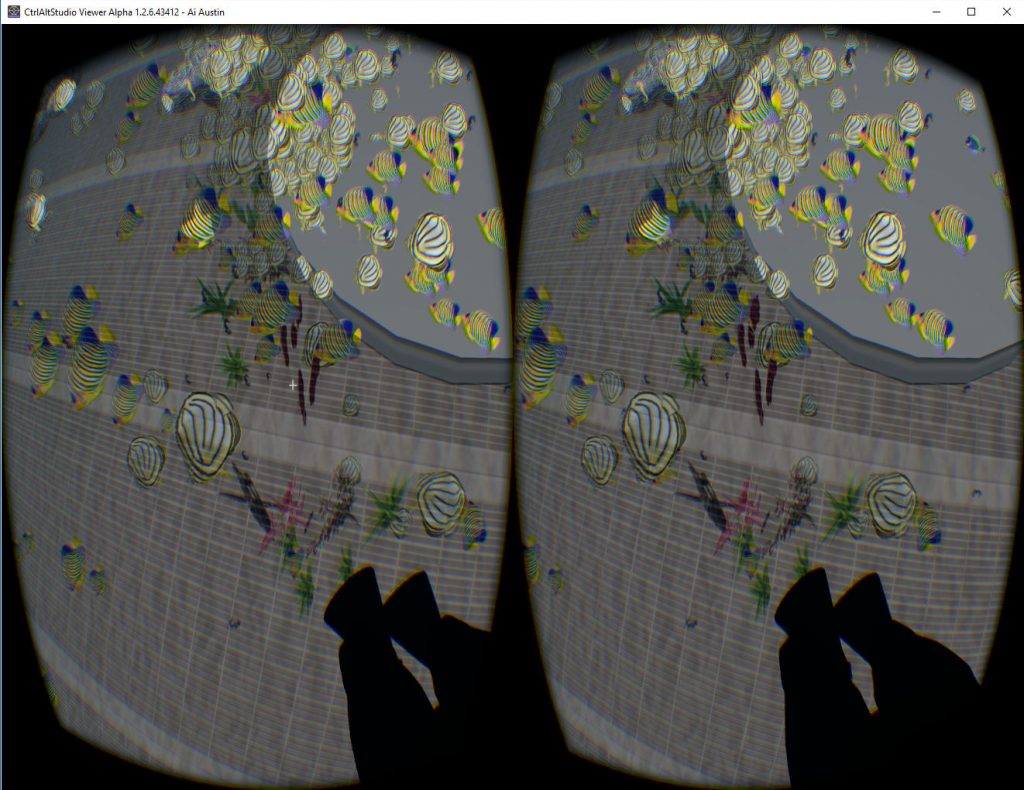 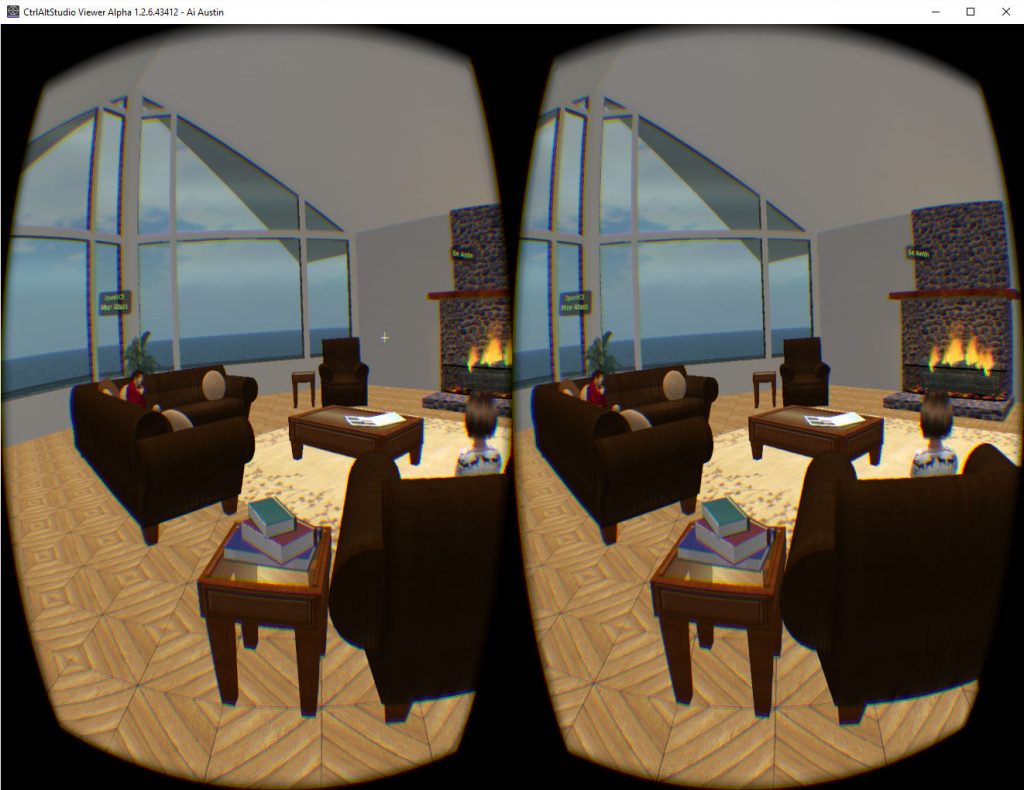 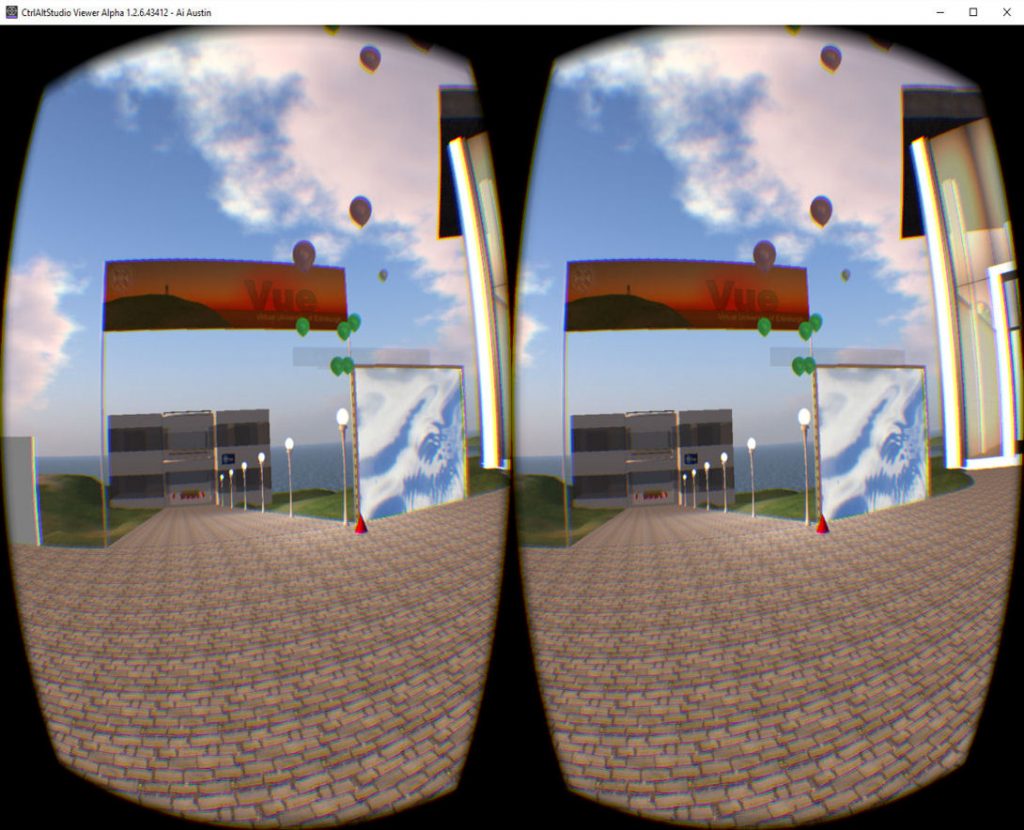 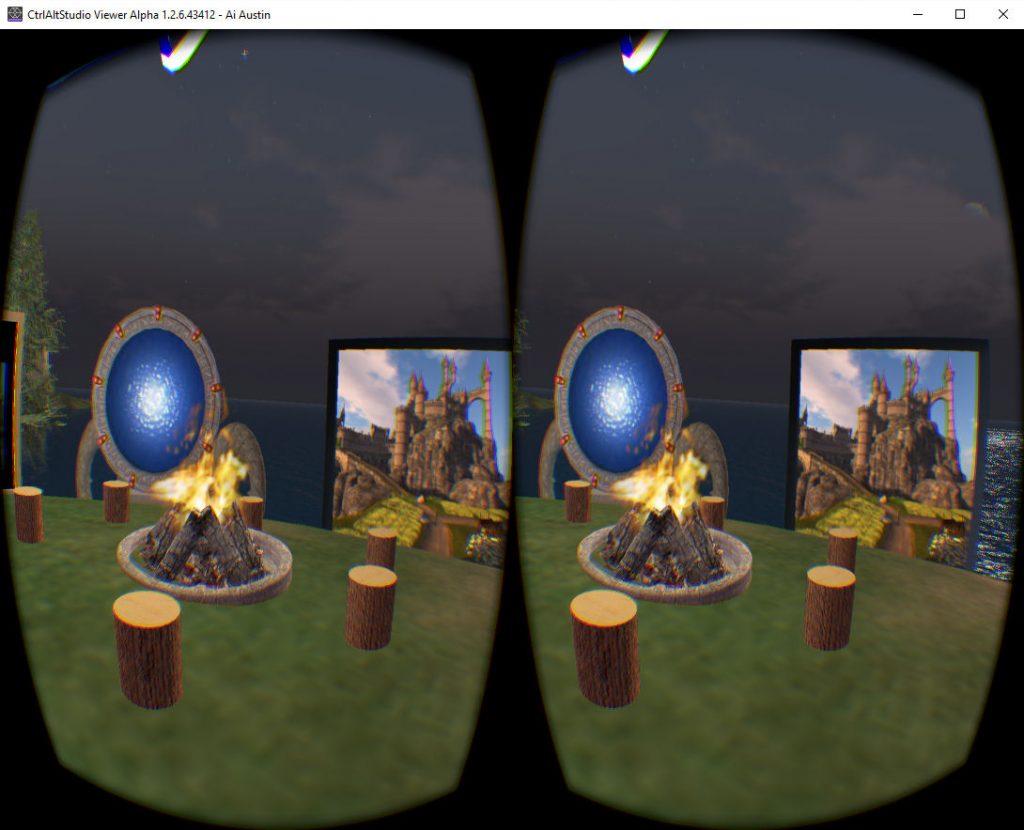 The RGU Oil Rig region on OSGrid (and replicated on Ailand) looks and works very well in VR with 3D directional sound for the various machine noises on the rig. The seabed Blow Out Preventer (BOP) really stands out when explored in VR… 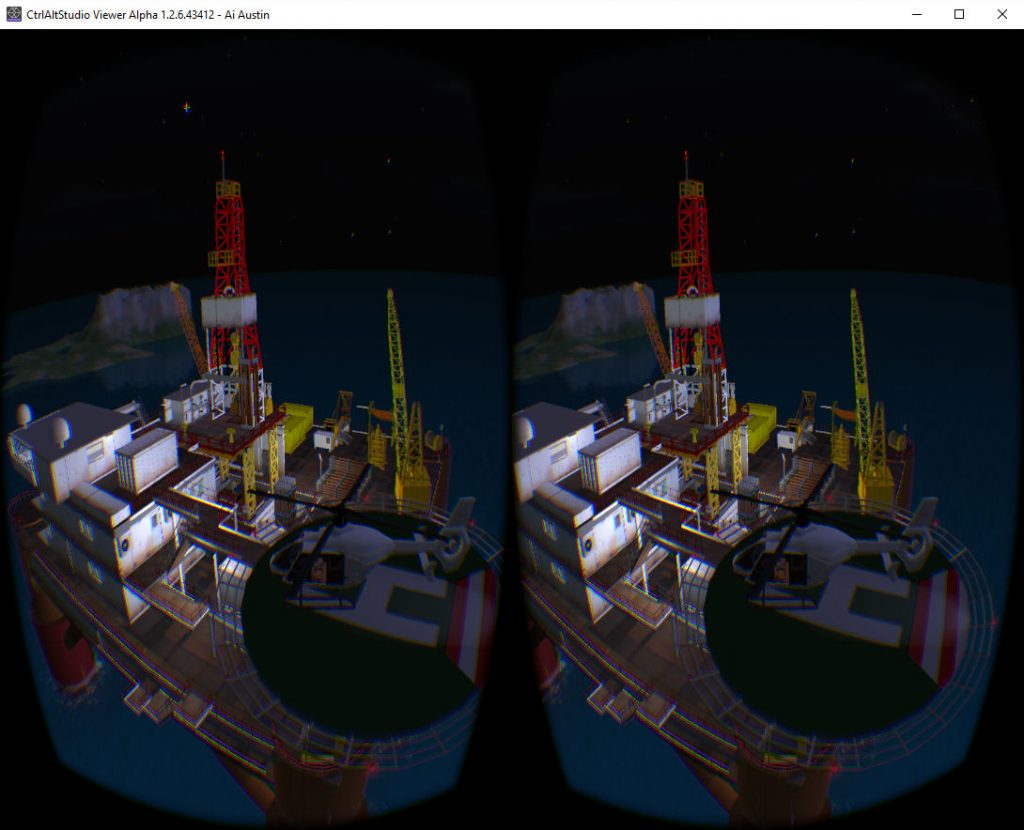 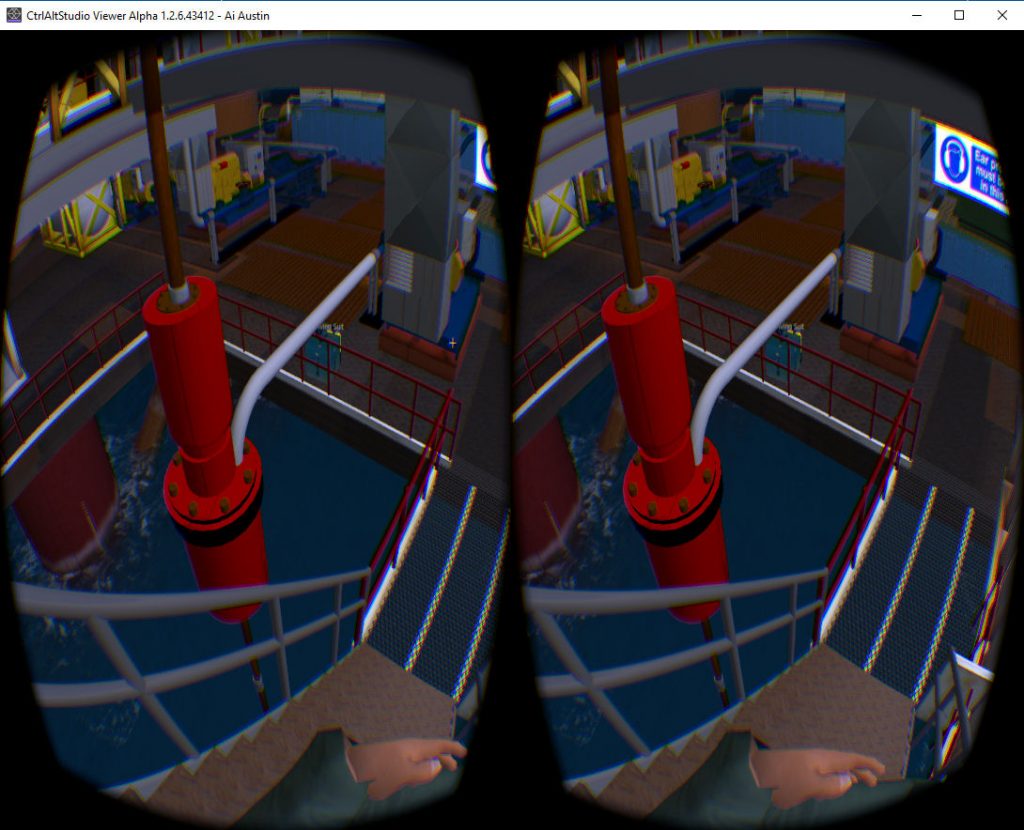 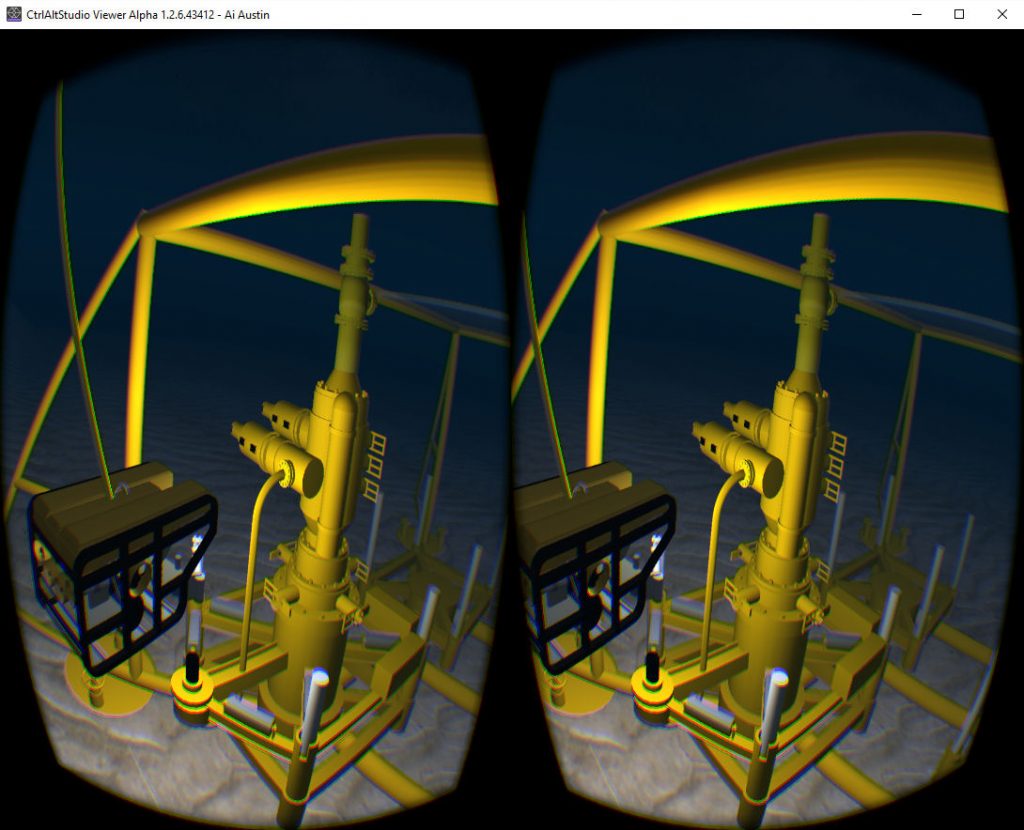 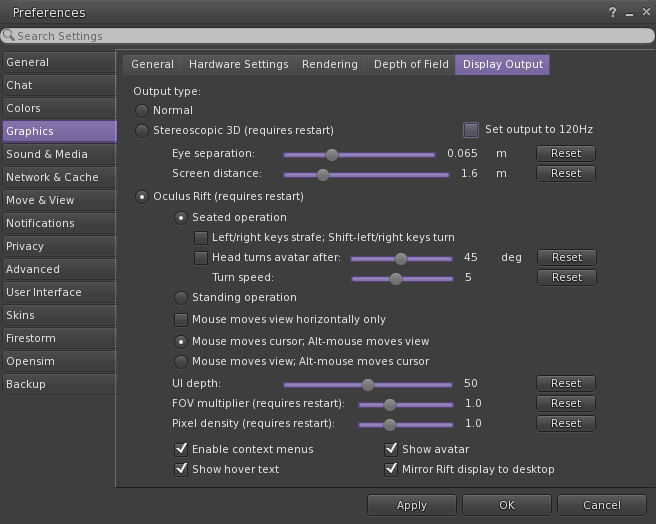 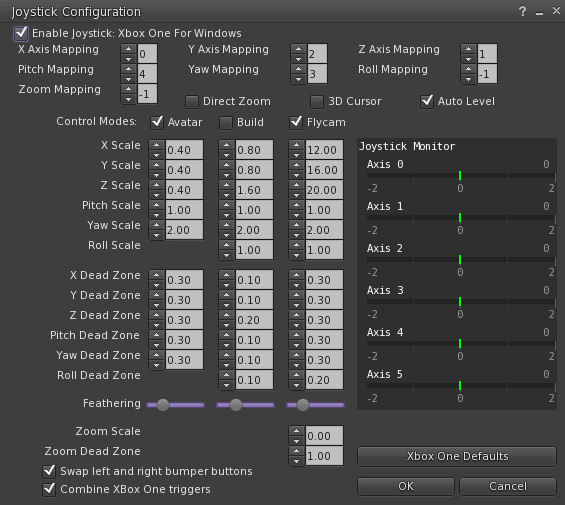 Other advice may be useful in some setups: 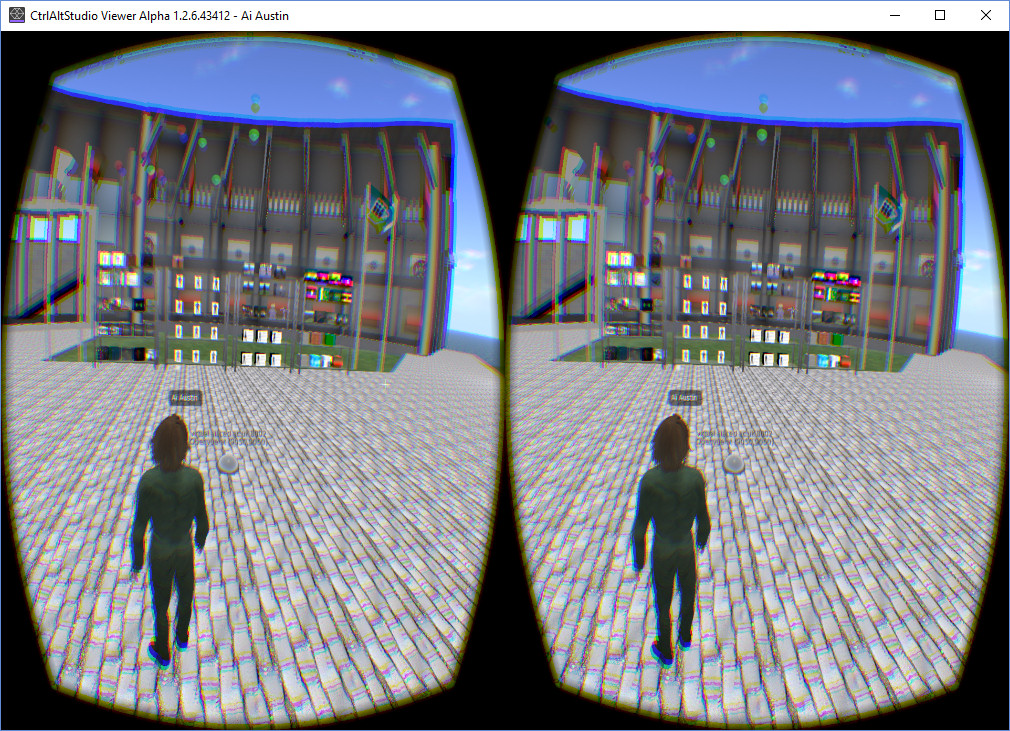 If you find that the user interface elements in Riftlook/3D mode look out of focus try adjusting Preferences > Graphics > Display Output > UI depth.

The cursor being visible in only the left eye is intentional behaviour. David Rowe reports that it is a “hack” that lets the cursor hover over UI elements and in-world objects correctly without needing complex code to sort out what depth to place the cursor in 3D space.

David Rowe noted that the mouse cursor is okay over UI elements but a bit off horizontally over in-world objects. He did not have time to find a fix ahead of this release. I also observed that the mouse can be a bit off when using Alt + Left Mouse Click or Ctrl + Left Click in Riftlook 3rd person perspective to lock onto or rotate the view around in world objects.

CtrlAltStudio supports wired and wireless versions of the X-Box Controller for Windows and X-Box One Controller (as bundled with the Oculus Rift CV1). It can also support other forms of “joystick”. One I find particularly useful is the 3Dconnexion SpaceNavigator which is a “3D mouse” supporting both avatar motion and separate “FlyCam” camera control.

Use with the HTC Vive

Some users have reported that the CtrlAltViewer set to use the Oculus Rift works with the HTC Vive using LibreVR/Revive. This is a compatibility layer between the Oculus SDK and OpenVR. It allows you to play Oculus games on your HTC Vive.