Fallingwater in southwestern Pennsylvania is a vacation home designed in 1935 by architect Frank Lloyd Wright and often thought to be one of the finest buildings of the 20th Century. 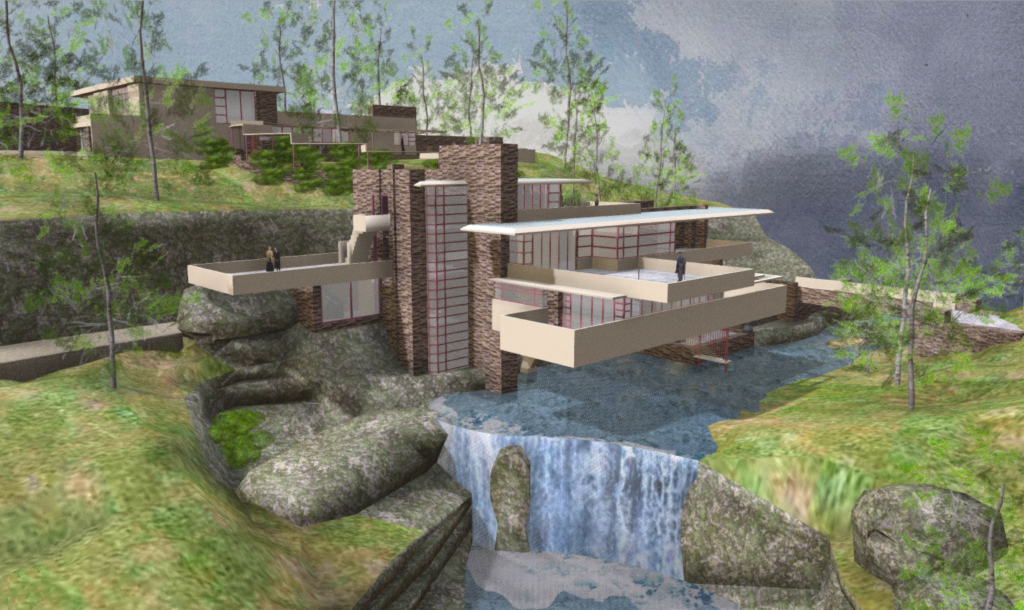 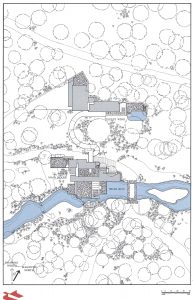 A lovely 3D openly accessible and modifiable model of the house and environment was created by Myles Zhang on Sketchfab.com [ Download Resources ] using 3D model source files originally by nottamun on 3dwarehouse.sketchup.com.

I extracted the Collada (DAE) model of Fallingwater with its associated textures and imported those to Unity3D adding in some surrounding terrain. The trees and bushes were mostly replaced using Unity3D free assets and waterfall details were added and animated. Building and ground lighting was added, along with a day/night cycle. Doorways are not animated, so some of these were made into phantom (non-colliding) objects so an avatar can walk through them. Some pathways, corridors, doors and stairs in the house are not accurately modelled and can cause an avatar to get stuck, so some invisible barriers were put in place to help prevent this. 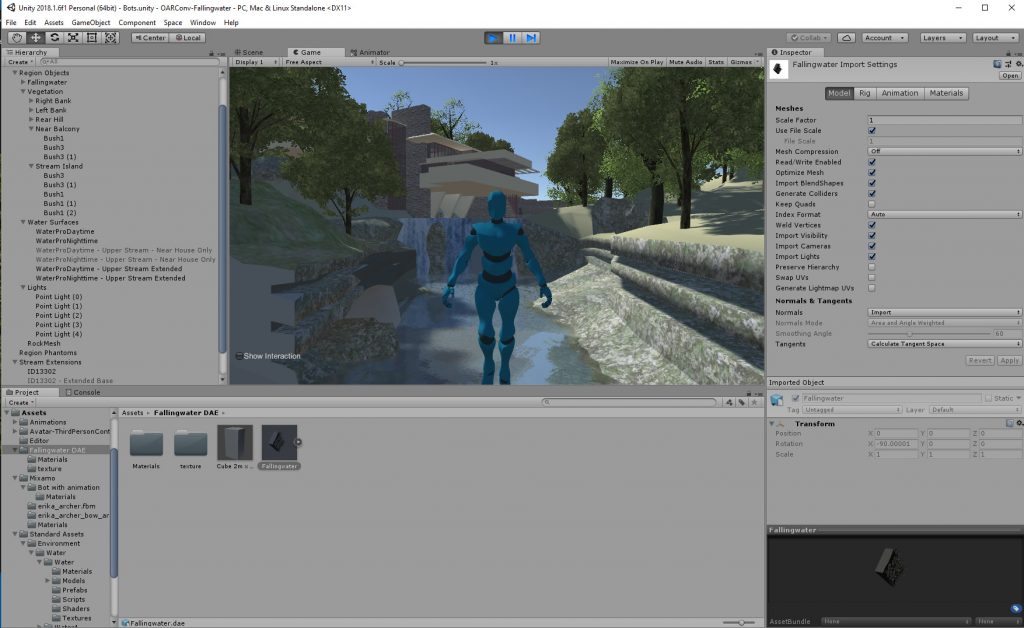 The build was then loaded in the multi-user virtual world Sinespace… it can be visited by searching for “Fallingwater” in the “Explore” panel in the Sinespace viewer. 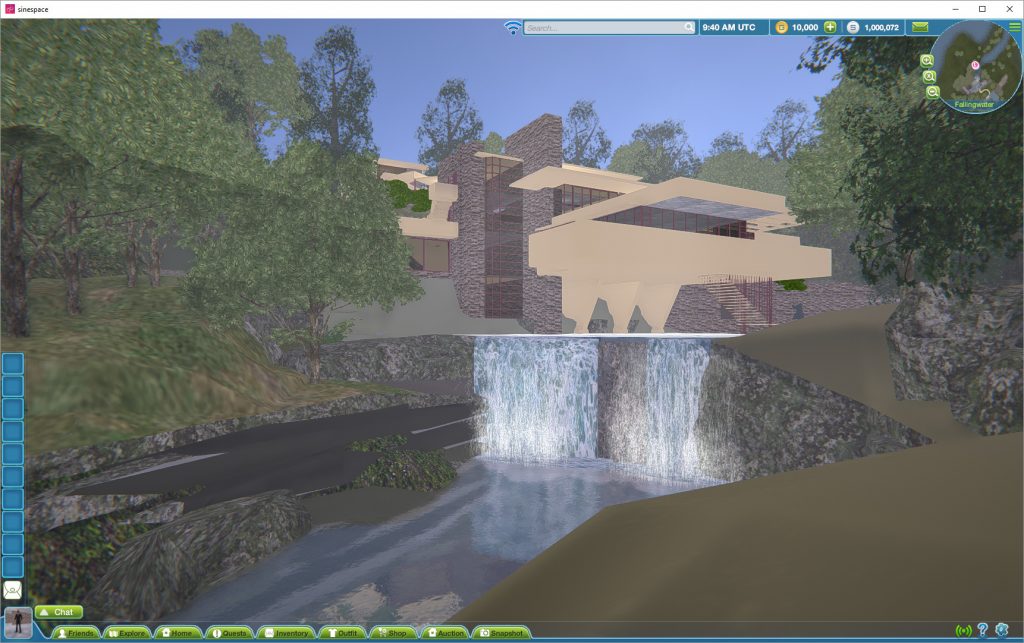 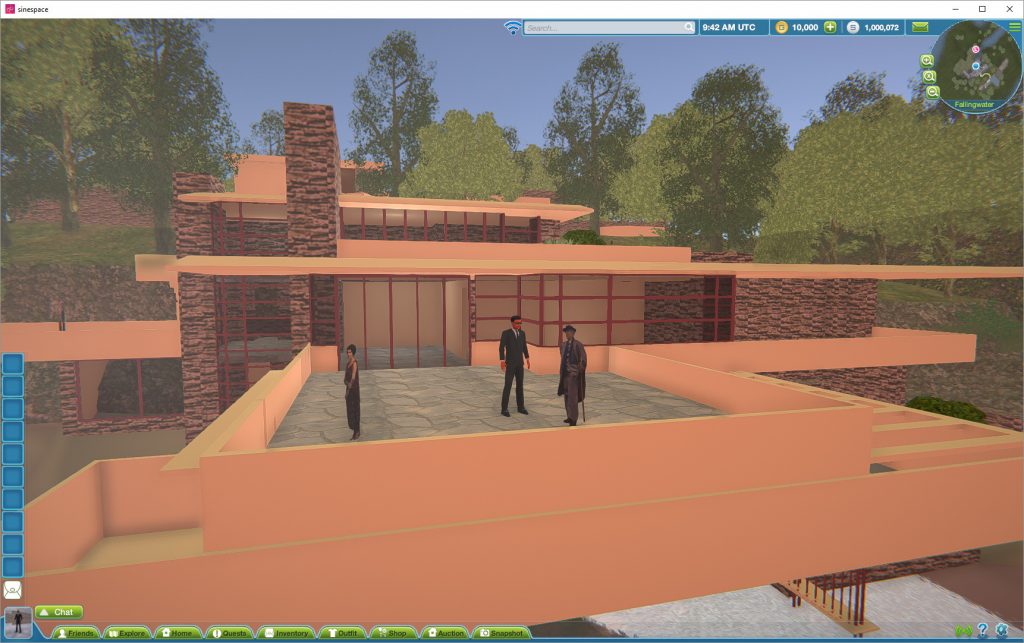 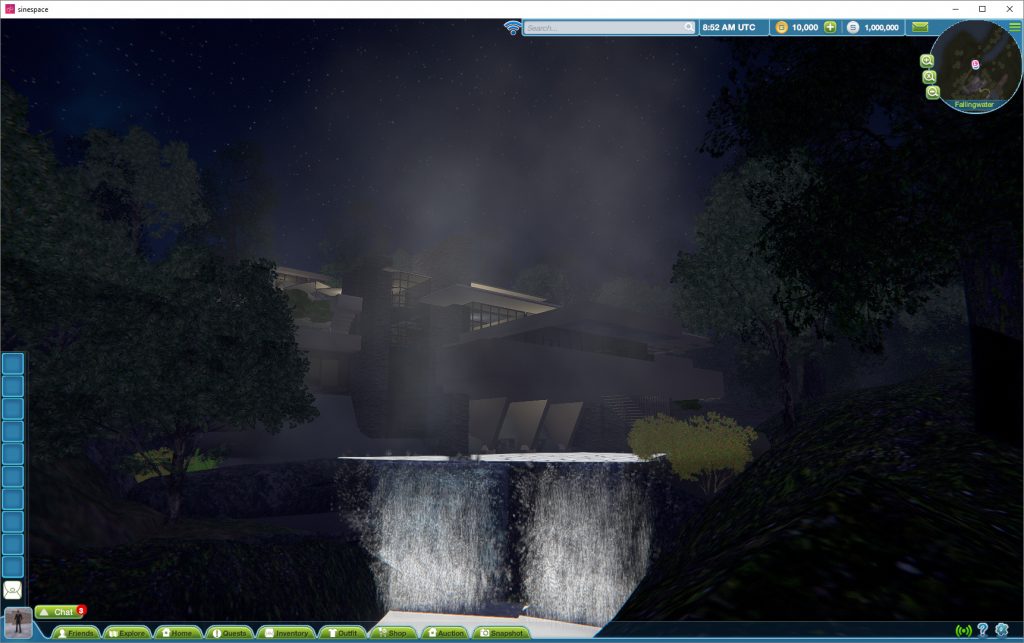 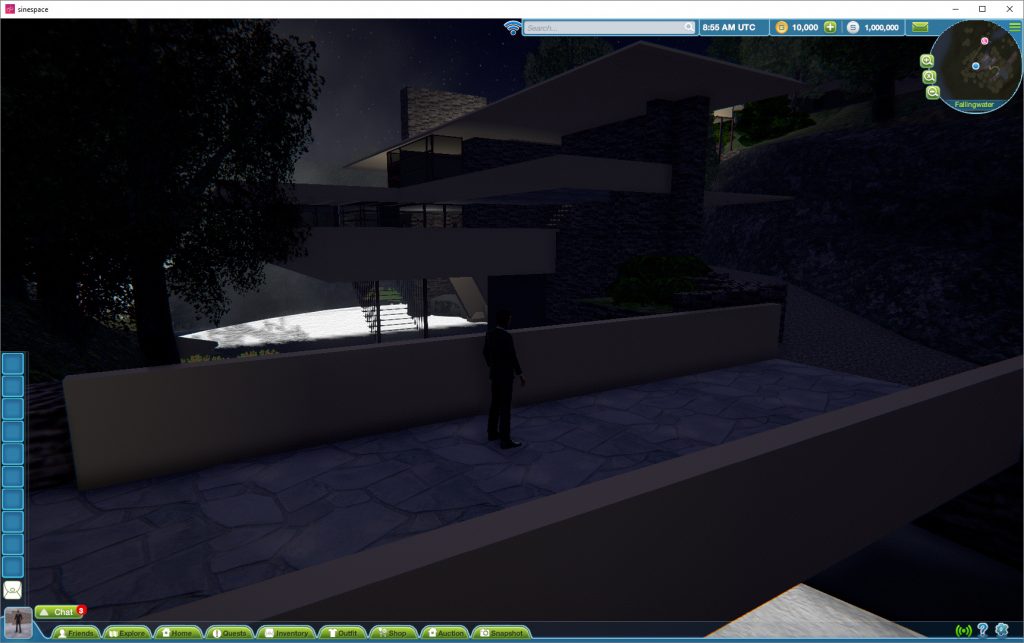 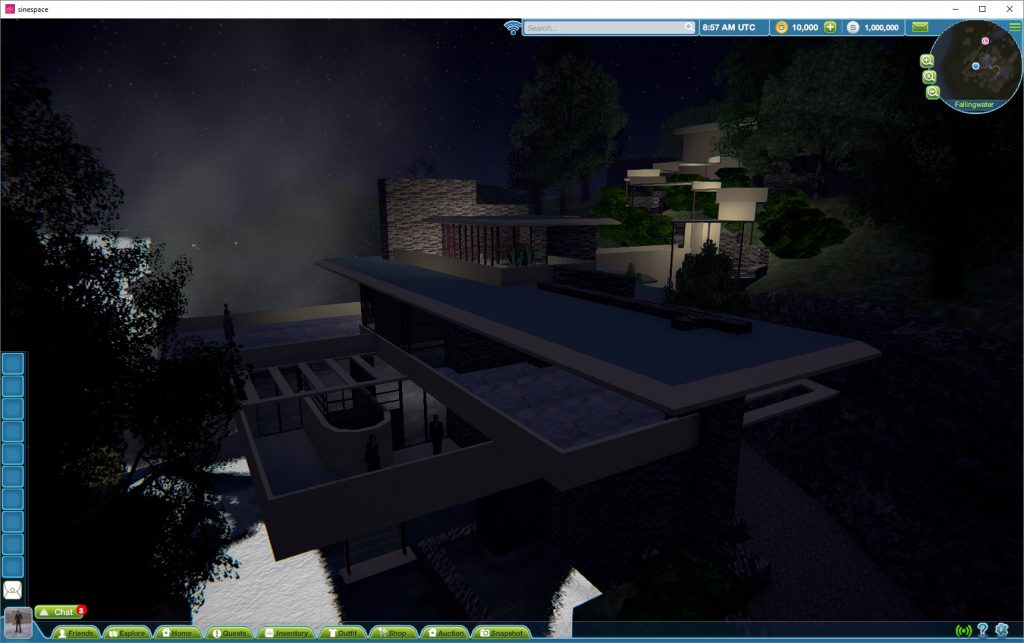 Fallingwater in Sinespace via a Browser/WebGL

A WebGL version may work for some via this link… http://sine.space/locations/fallingwater 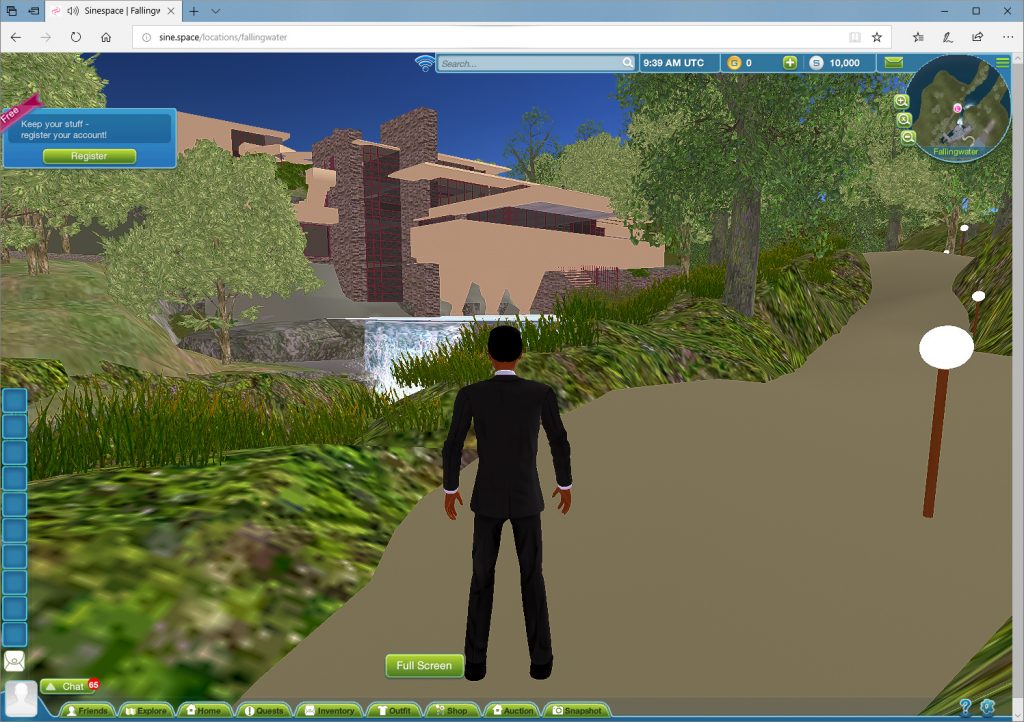 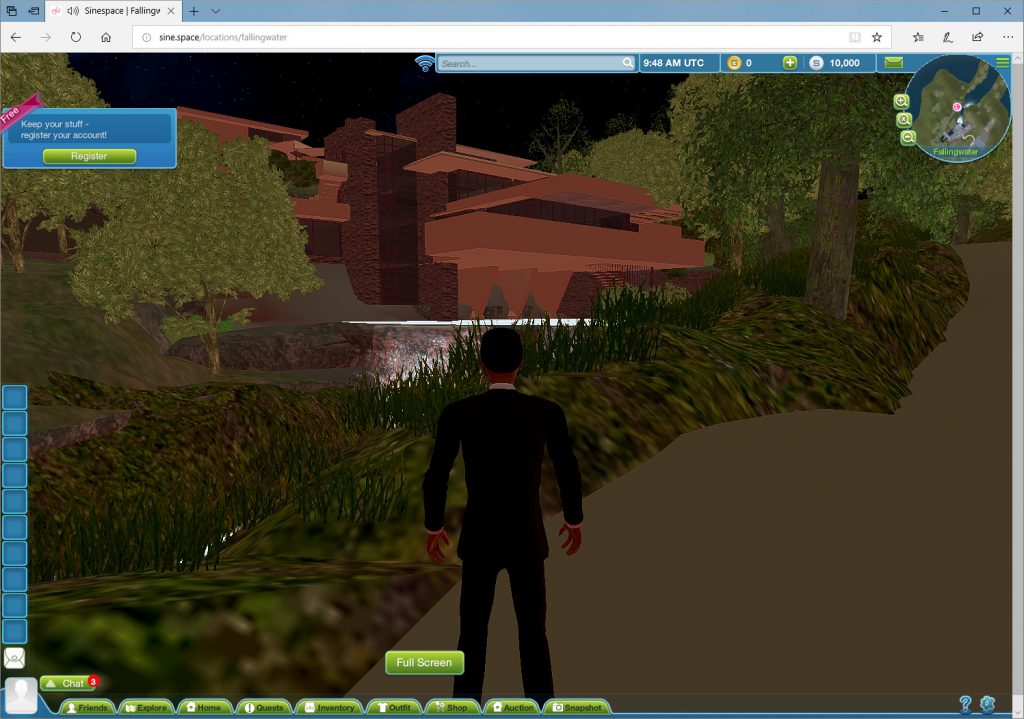 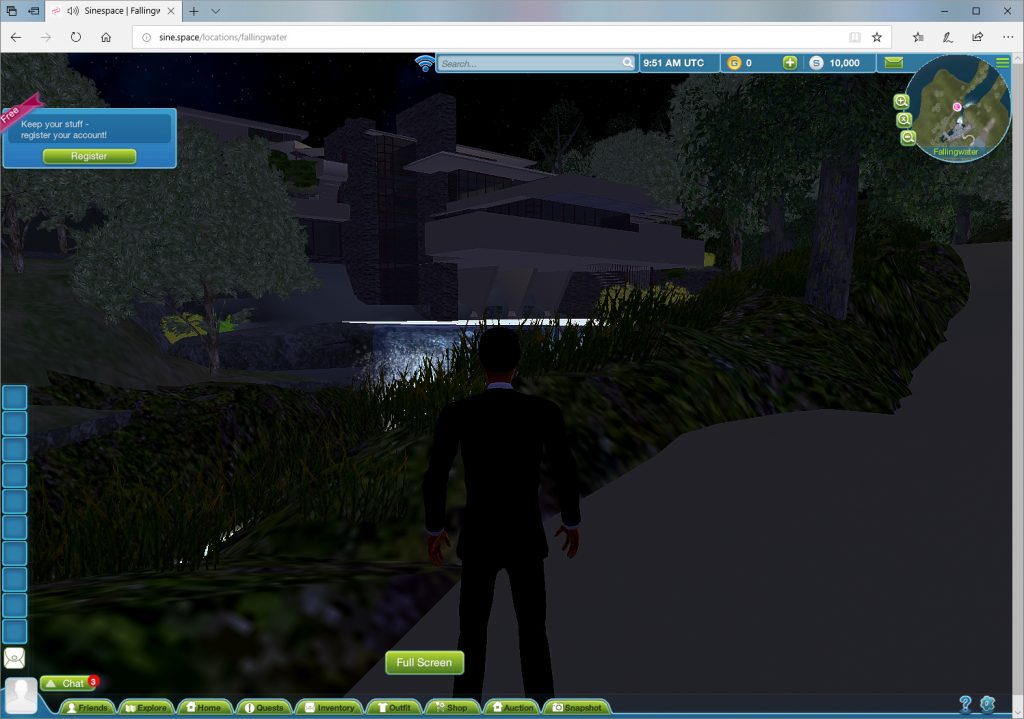 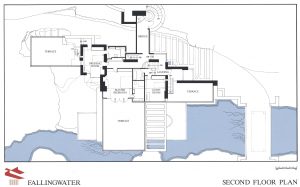 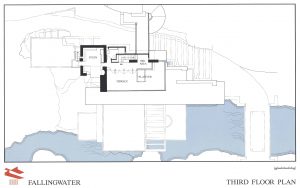 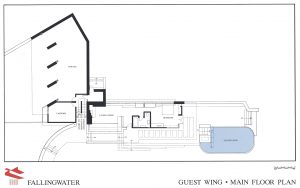 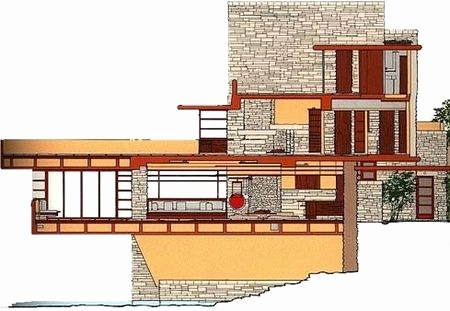 A compatible interior model for Fallingwater is also provided by Miles Zheng on Sketchfab.

Tucked away in the sleepy forests of southwestern Pennsylvania sits one of the world’s most famous buildings: Frank Lloyd Wright’s Fallingwater. Commissioned by wealthy department store owner Edgar J. Kaufmann and completed in 1937, the home’s cantilevered tiers hang suspended atop a 30-foot waterfall — Wright’s ingenious way of melding the man-made structure with its natural surroundings.

Obtain the models from the Sketchfab links above. You may need to be logged in to obtain these. This gives you zipped .kmz (Google Earth) format files. For each do the following:

Repeat for the Fallingwater Interior.

Copy the Fallingwater Exterior into the Scene/Hierarchy and place at 0,0,0
Copy the Fallingwater Interior into the Scene/Hierarchy and place at 0,0,0
Hide or remove the cylindrical background image named “Ambience”.
Consider making surrounding terrain to fit.
Consider using some of the additional files to add ambient sound, fireplace sounds, etc.

This entry was posted in 3D, Virtual World and tagged Fallingwater. Bookmark the permalink.