Update 23-Sep-2019: Peter Kappler has provided an updated version of Firestorm VR compiled for Second Life and OpenSim which should fix the “black screen” issue mentioned below for at least some HMDs. More information, download links and tips are provided for Firestorm VR 6.2.4 at https://blog.inf.ed.ac.uk/atate/firestorm-vr-6-2-4/

The notes below relate to an earlier Firestorm VR version 6.0.1… 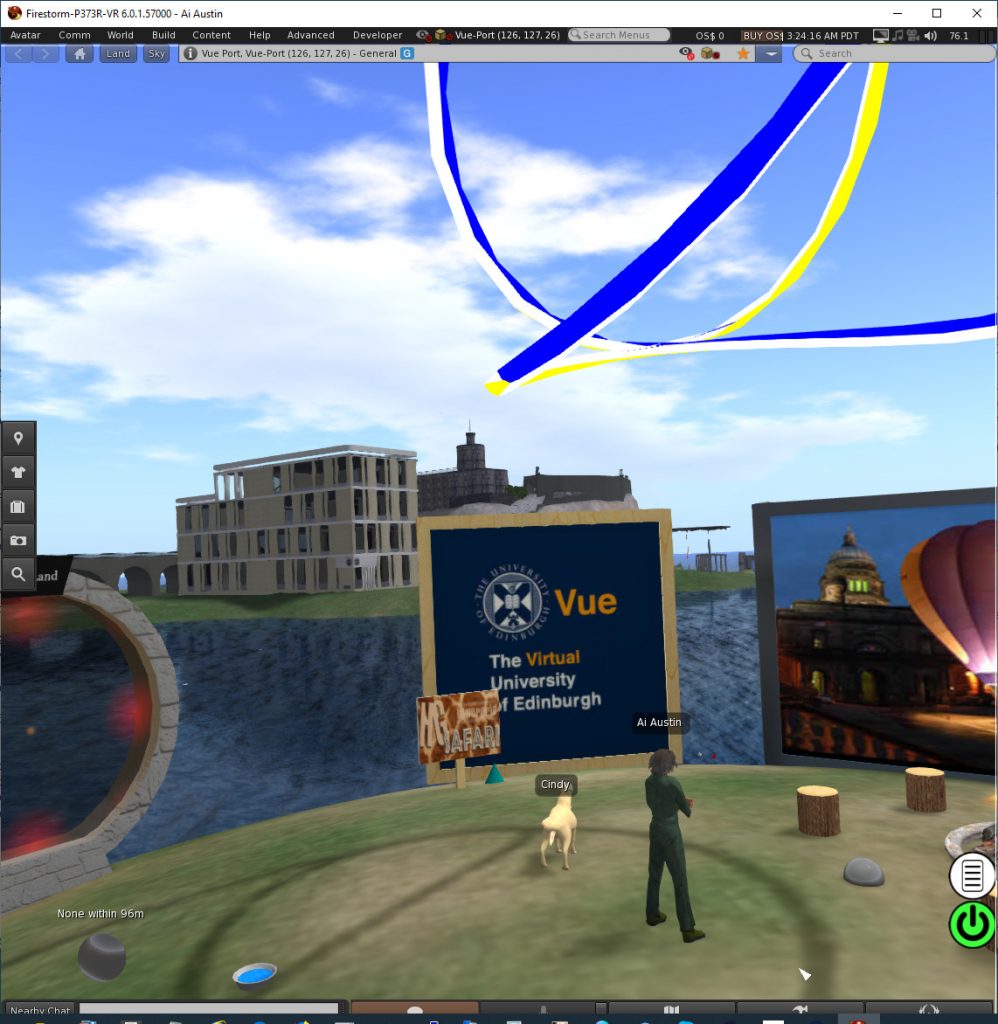 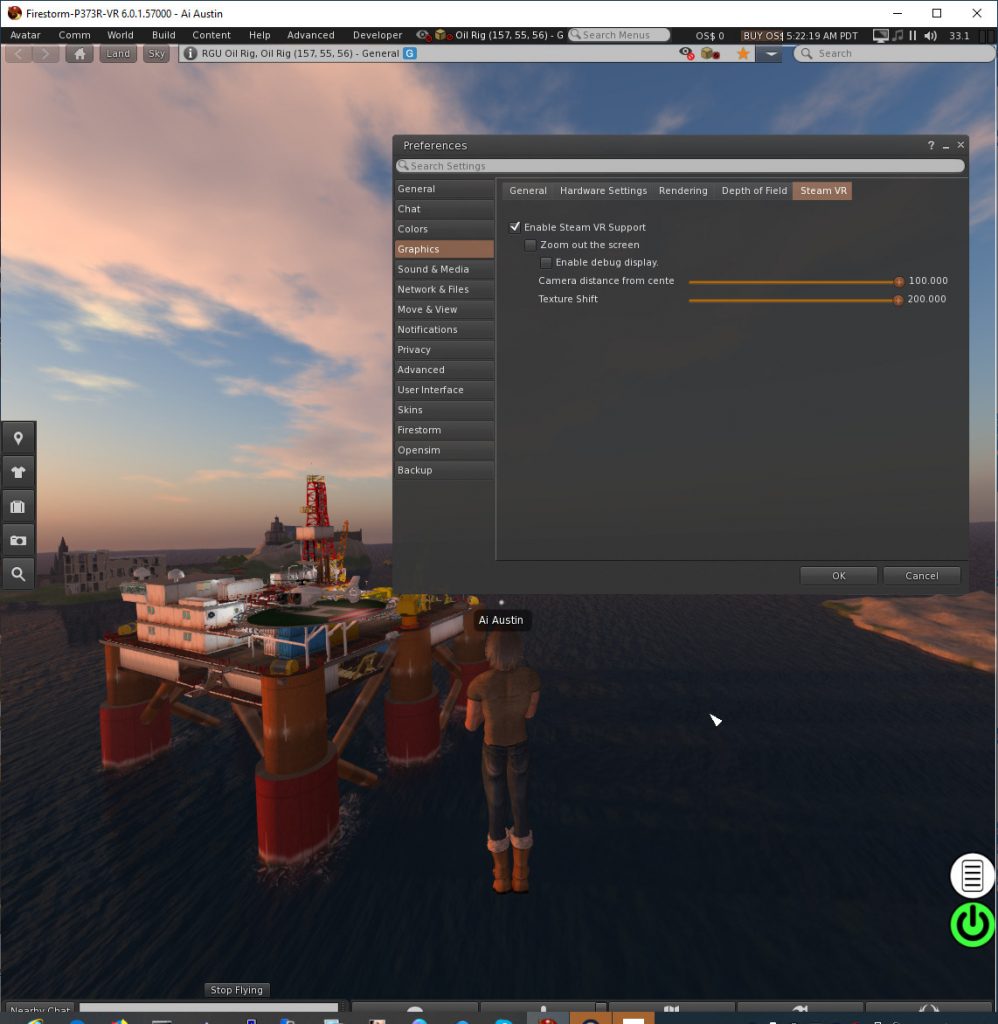 Wagner James Au blogged on this in January and February 2019, and David Rowe, creator of the CtrlAltStudio VR viewer, pointed me at this development just in time since CtrlAltStudio now has a messy visual glitch on exit to the operating system [Blog Post on CtrlAltStudio VR Viewer].

Here is the ready to run installer and source code for version 0.3 27 Feb 2019 Build 57000** (based on Firestorm 6.0.1.56538):
Installer: http://gsgrid.net/Phoenix601VR-V0.3.rar
Source Code: http://gsgrid.net/FirestormVR_Source_V_0_3.rar [only needed to build the viewer from source]
** The “57000” serial number that is reported is not meaningful.
Peter chose that as beyond the released Firestorm version at the time to avoid update messages. 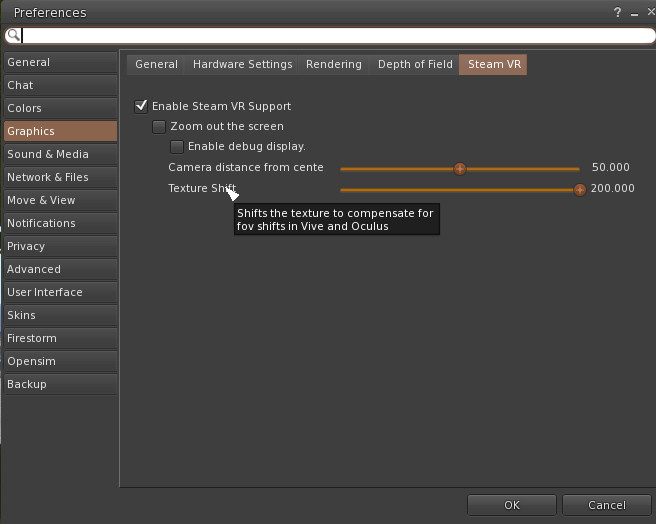 For the Oculus Rift these settings should also be adjusted: 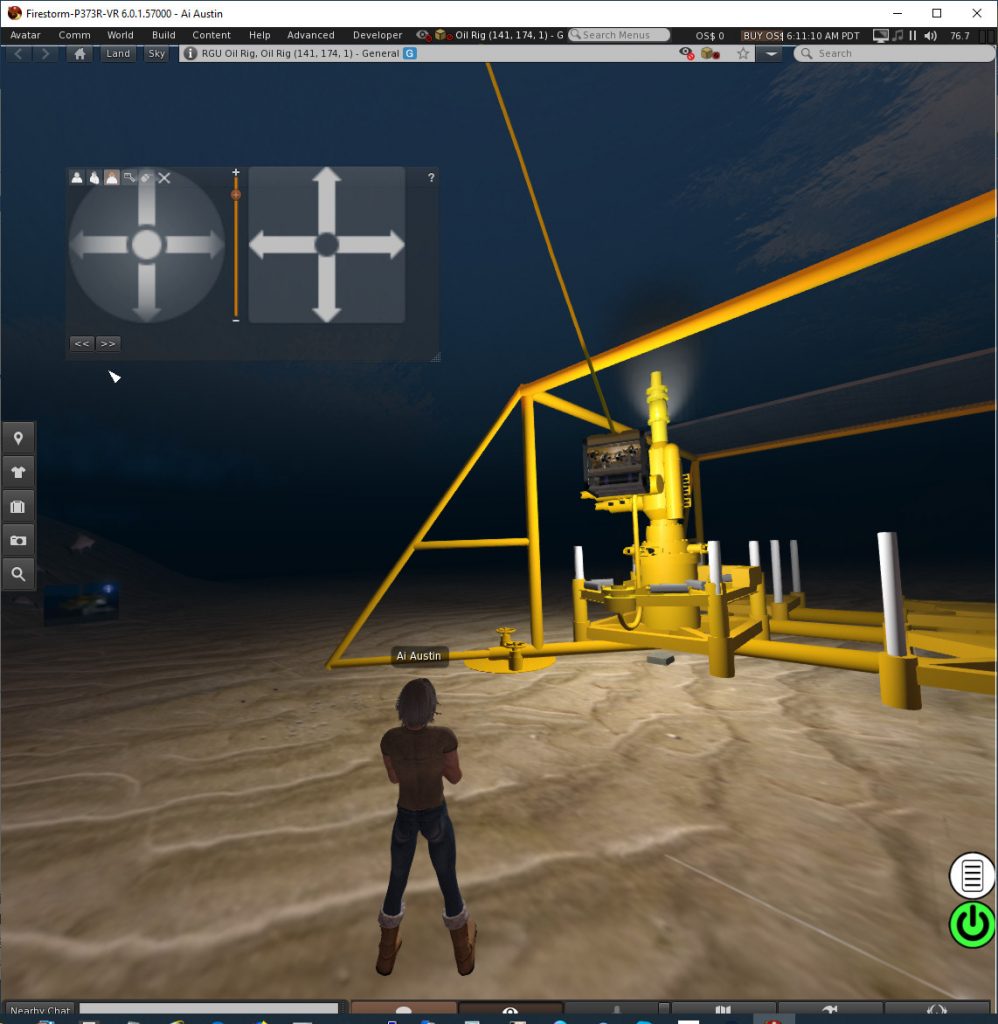 If you move the mouse to one of the four corners of the screen the HMD view jumps to show that corner in VR mode. This enables menus and HUD attachments to be more easily reached. Return the mouse to the centre of the screen to return to normal HMD directional view.

The Firestorm VR Viewer will not work well if the Second Life/OpenSim region you visit cannot normally be displayed with a decent frame rate. The higher the better. At low frame rates bad flickering will occur in VR mode. My suggestion is to look at the framerate (in Firestorm it is displayed in the upper right hand corner of the viewer) and to adjust the graphics settings (especially draw distance and quality sliders) until you have around 50fps (30fps min.) and then try VR.

On my Oculus Rift setup SteamVR usually was launched whenever the Firestorm VR viewer was started, and that automatically started the underlying Oculus software. But if the SteamVR or Oculus Home screens shows in the HMD or the HMD is blank rather than showing the Second Life/OpenSim virtual world display, start SteamVR first, check Oculus Home is launches, and then run the Firestorm VR viewer.

This JIRA issue has comments concerned over low frame rates and poor support for all the menus, popups and creator/editing facilities in Second Life and OpenSim. Personally, I don’t think ALL the creator/build menu facilities are needed all the time, and those can be done by switching back into VR mode… which is easy with the TAB key method uses to switch between 2D and VR mode. Concerning frame rates, some users are probably seeing very busy mainland regions with tens of thousands of objects. When I use Firestorm on OpenSim builds with a few avatars in training modes I can get 160fps frame rates! And high frame rates when we have used private regions on Second Life for educational meetings.

Some specific figures I observed on one Second Life scene trying to make the view distance (256m), graphics settings (High), etc the same…

The following images were take on a Dell Precision T5180 with 32GB Memory and Nvidia GeForce GTX 1080 GPU, with Ultra graphics settings and 512m view distance. 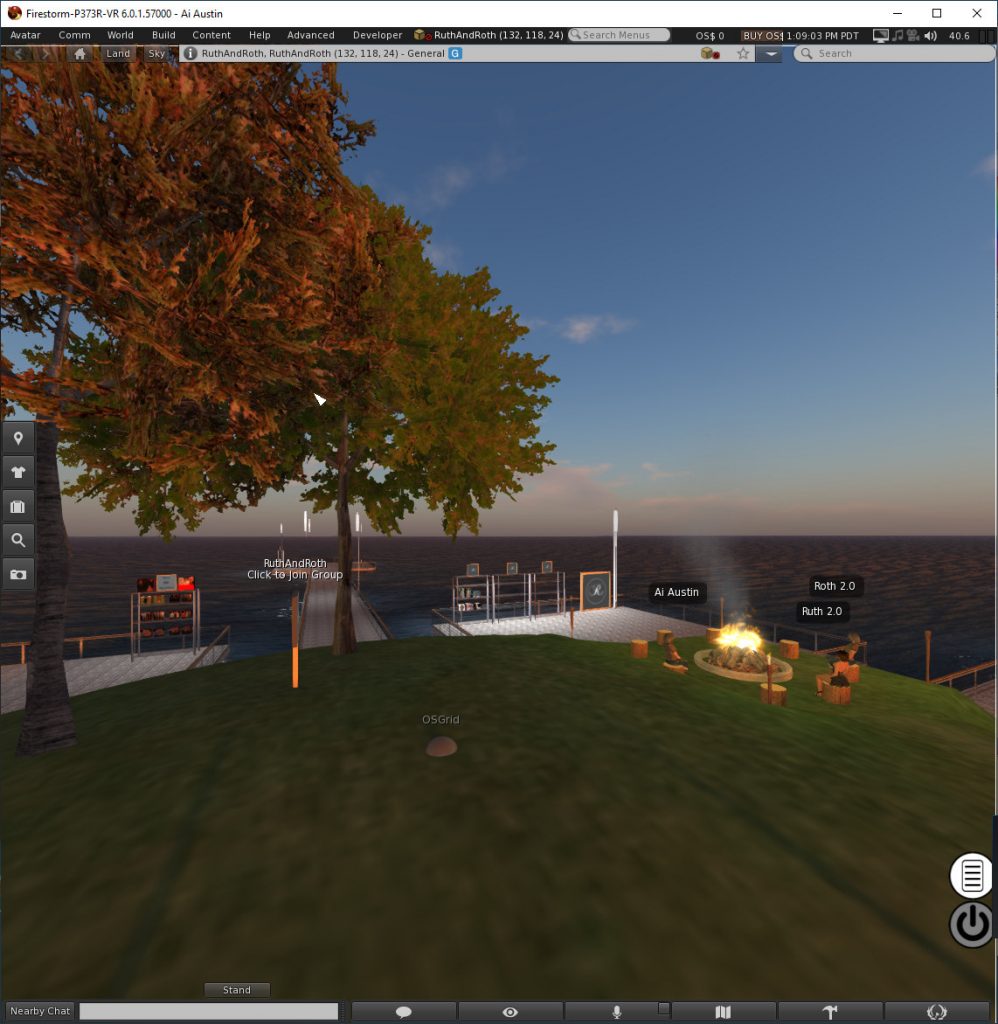 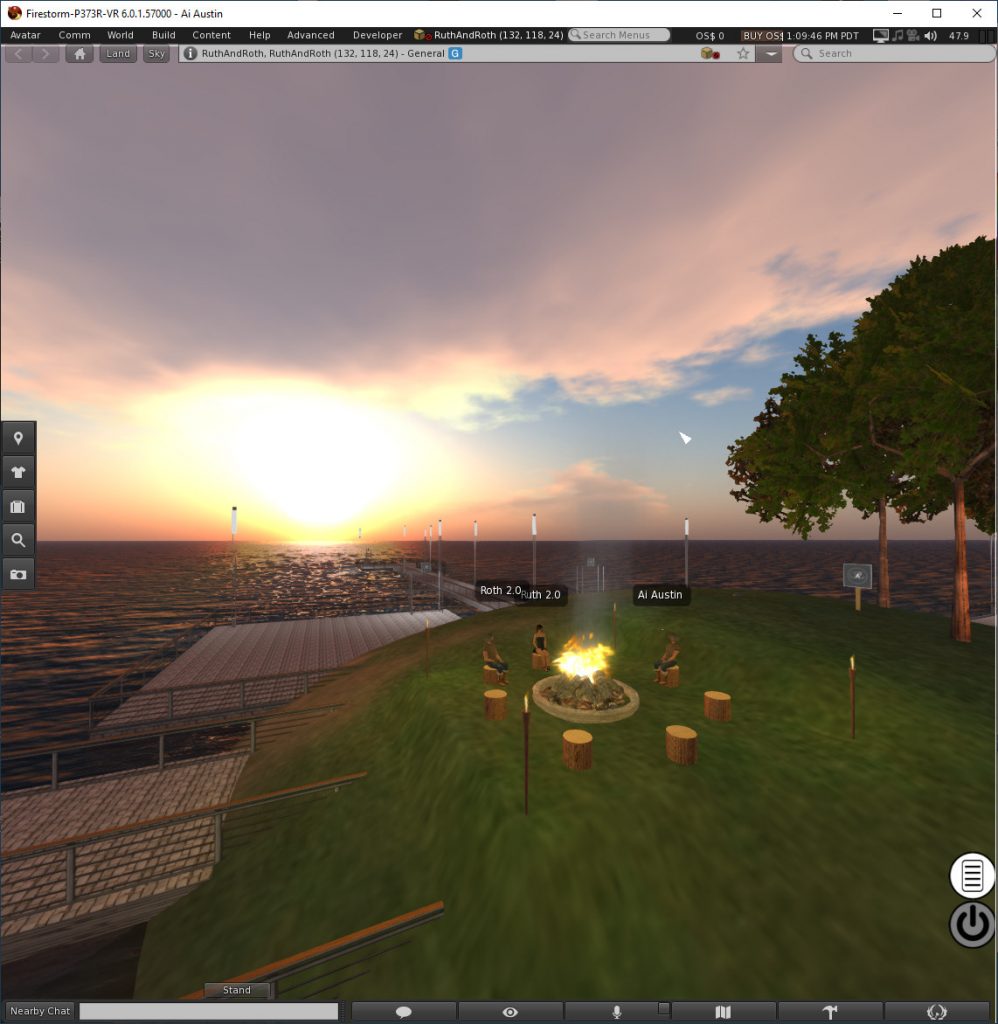 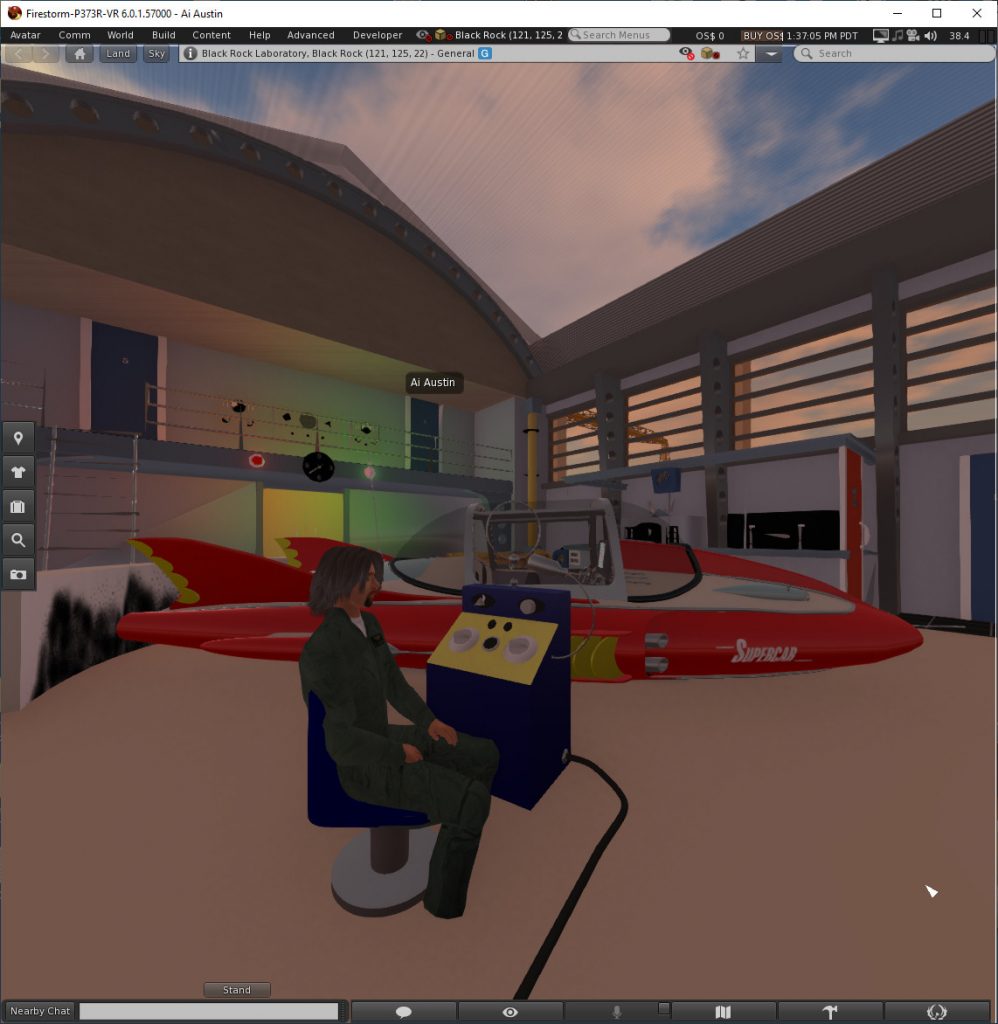 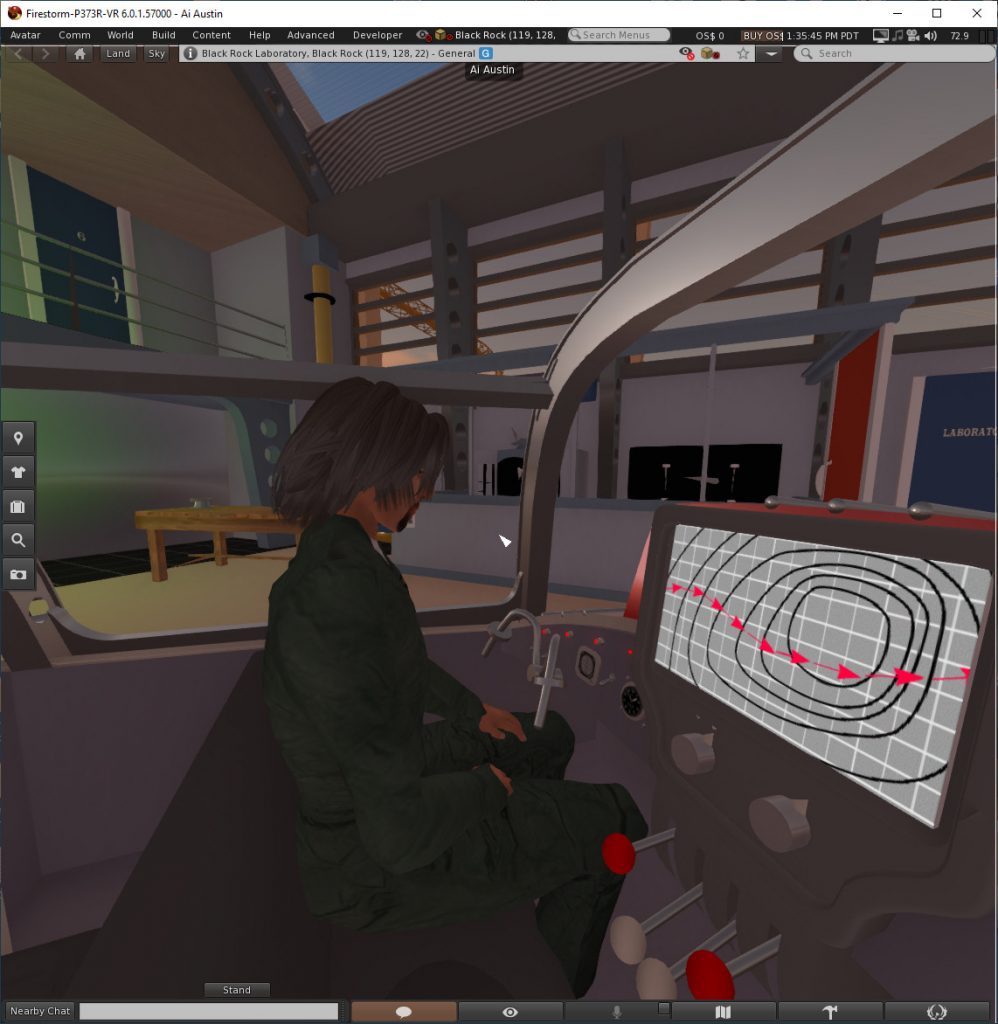 Start Firestorm VR… turn off the Steam VR enabled tick box. Change the graghics settings (I went between High and Ultra or vice versa). Then DO NOT enter VR mode with TAB. Instead stop Firestorm VR, SteamVR (and Oculus Home). Then launch Firestorm VR again, tick Steam VR enabled (I did that before login but that may not matter) and TAB to VR. My assumption is that something about the gpahics settings interferes with the VR mode HMD display unless the settings are committed in some way when a relog and Steam VR enable takes place. Just ticking Steam Enabled on and off while its running does not seem to fix this problem.

There are people that have issues with having tracking but no image. It may have something to do with deferred lighting or shadows in the viewer. Or GPU buffer settings since I copy the images directly from BACKBUFFER before swap.

Nvidia GPUs: In the Nvidia Control Panel -> Manage 3D Settings -> Global Settings, there is a setting for Virtual Reality Pre-rendered Frames. Check it is set to 1. Also check that Triple buffering is OFF. Then under Program Settings check that these settings are not explicitly overridden to something else for Firestorm VR.

AMD Radeon GPUs: AMD drivers have a setting called Flip Queue Size… make sure it is set to 0. The flip queue size option may not be available in recent AMD driver updates in which use the “Main3D_DEF” and “Main3D” settings to change your “flip queue size”. These should match. I.e. “0” and “0x3000”.

On 22-Sept-2019 Peter Kappler provided a VR test application that uses the same rendering method as Firestorm VR to help identify if your own VR HMD setup might have issues:

http://gsgrid.net/sdlvrtest.rar
Unpack it, go to the bin/win32/ folder and open the hellovr_opengl.exe
That should show you a world full of boxes.
If it shows a black screen then there is an issue on your PC. 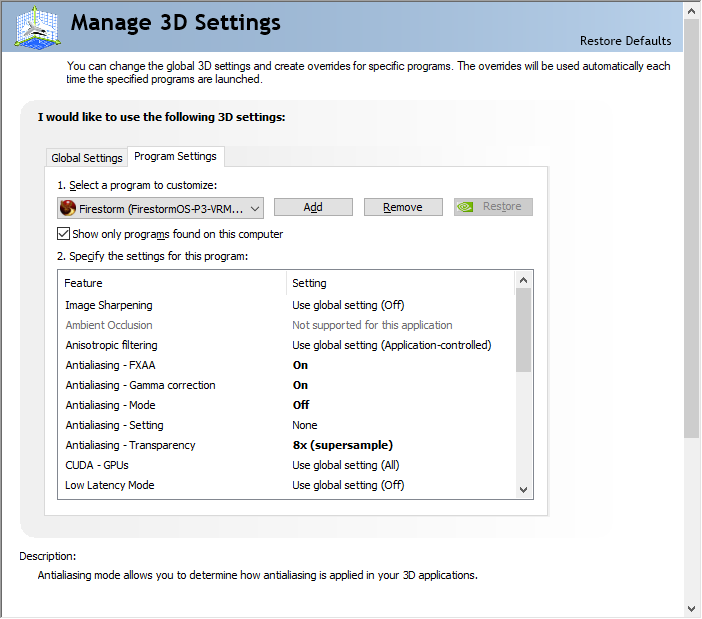