Ruth2 v4 Revision 2020-09-02
Based on Blender Mesh from https://github.com/RuthAndRoth/Ruth2 (was Ada Radius Draft 11). Use a viewer which supports Bakes on Mesh, e.g. Firestorm.

Ruth2 is a low-poly mesh body specifically designed for OpenSimulator and which can also be used in Second Life™. It is built to use standard Second Life UV maps using a scratch-built open source mesh by Shin Ingen, Ada Radius and other contributors from the RuthAndRoth Community. Ruth2 v4 is the fourth version of the mesh avatar updated to be built and rigged using Blender 2.8 and with improved documentation of the workflow to make it reliably repeatable and credits to all the asset creators involved. 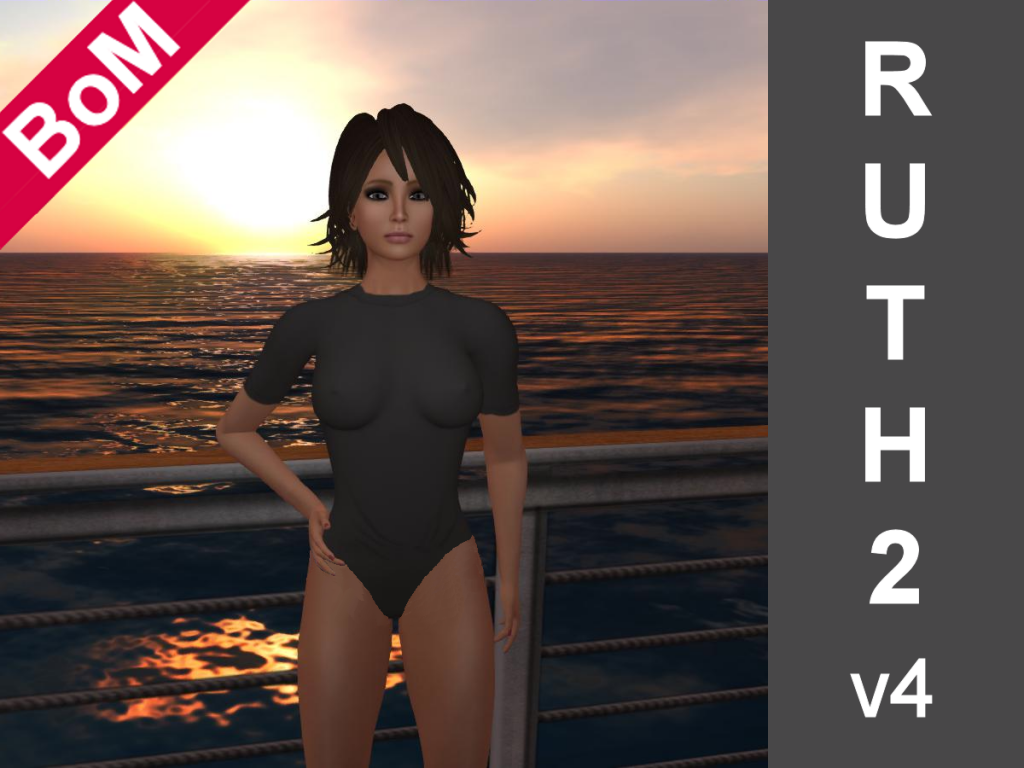 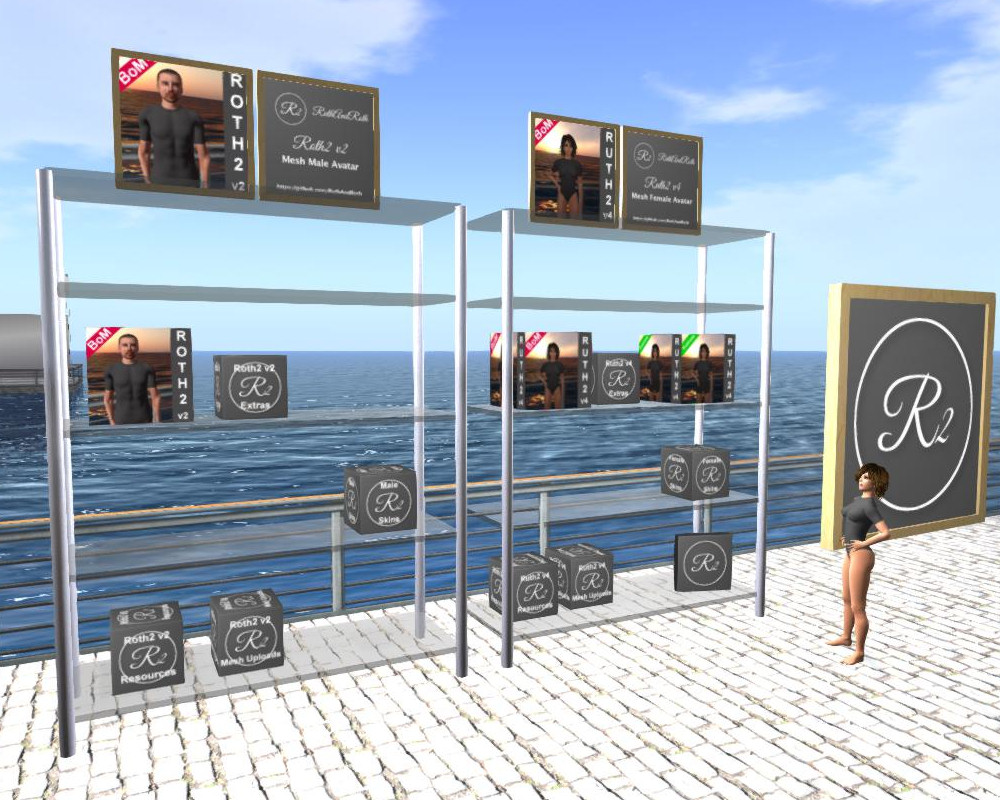 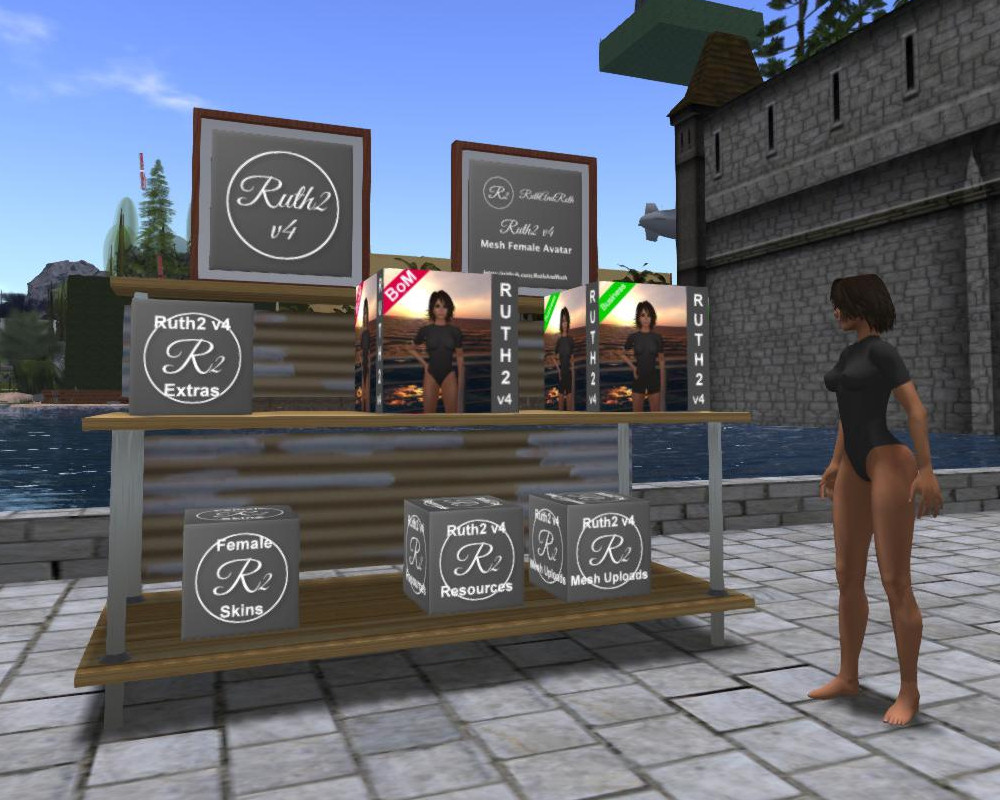 Ruth2 v4 is provided as a single mesh that is designed to work well with Bakes on Mesh. It has a simple alpha capability without needing separate mesh parts. Alpha masks can be worn to give more control over hidden areas. Rather than use Bakes on Mesh, skin textures may be applied, but you should then add a full body alpha mask to hide the underlying system avatar.

The “Ruth2 v4 – Mesh Avatar” box contents are designed so that they form a complete initial avatar using Bakes on Mesh. You can switch to your own shape, skin, eyes and hair and/or use the HUD to change your appearance. Some example hair, underclothing, hair bases and a range of alpha masks are provided in the “Ruth2 v4 – Extras” box. Skins as used in the HUD and more can be found in a “R2 Skins – Female” box.

Ruth2 v4 uses a single combination HUD, created by Serie Sumei, for alpha masking, skin and eye texture application, finger and toe nail colour, and other features. The skins and eyes that are available are set via a notecard (!CONFIG) in the Contents of the HUD which can be edited to incorporate your own skins (11 slots are available) and/or eye textures (5 slots are available). 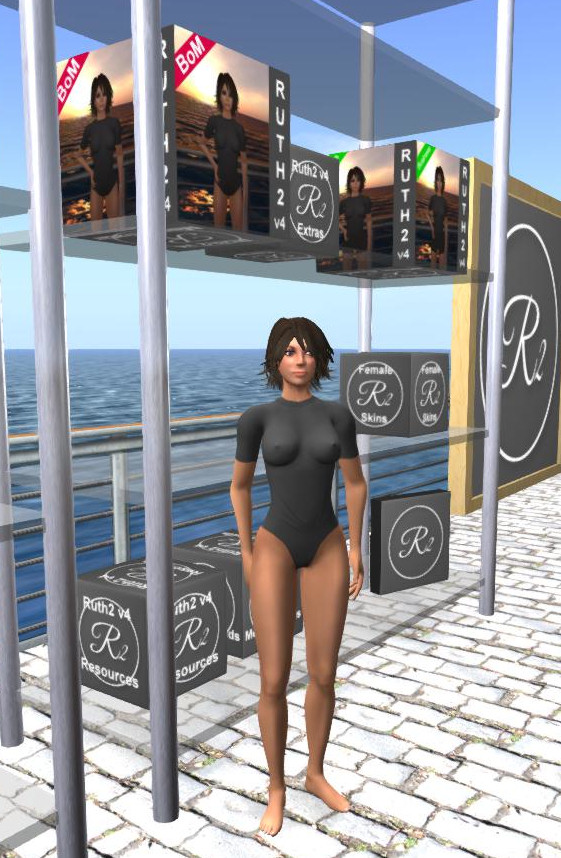 Ruth2 v4 – Mesh Avatar – This is the normal distribution box and is designed so that once unpacked its contents can be “worn”. It contains basic “classic” avatar shape, skin, eyes or hair to form a complete outfit, but these can be replaced with the users own preferred content.

Ruth2 v4 – Mesh Avatar Business – A special version of the Ruth2 v4 Mesh Avatar for G-Rated or Business usage is provided with a modified body shape and skins which have simple baked-on underwear.

Ruth2 v4 – Extras – This is a box of useful extra elements and options.

Ruth2 v4 – Resources – This box is not normally needed. It contains textures and other resources with original UUIDs as used within the other assets. This can be useful if moving the assets across grid, or to repair elements.

Ruth2 v4 – Mesh Uploads – This box is not normally needed. It contains mesh for all Ruth2 v4 elements as originally uploaded and before attaching a root prim or any texturing.

R2 Skins – Female – Skins and related skin textures as used in the Ruth2 v4 HUD and alternatives from https://github.com/RuthAndRoth/Skins.

See this Wiki page for information on Bento Mesh Bodies and Heads… http://wiki.secondlife.com/wiki/Project_Bento_Resources_and_Information

The following avatar appearance slider controls are not supported due to technical constraints as described in this Wiki page… http://wiki.secondlife.com/wiki/Project_Bento_Skeleton_Guide

Ruth2 v4 is designed to have low “avatar complexity” when worn to reduce lag. Asset sharing of the meshes and textures has been encouraged wherever possible with all assets made freely available to allow for reuse. 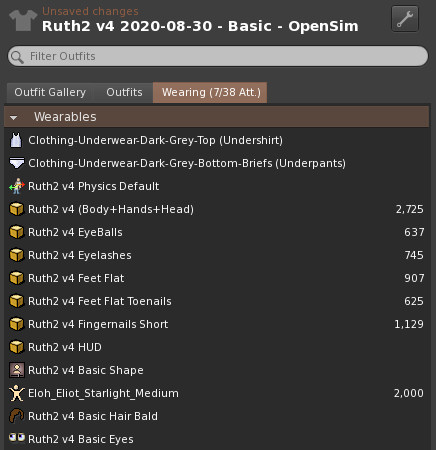 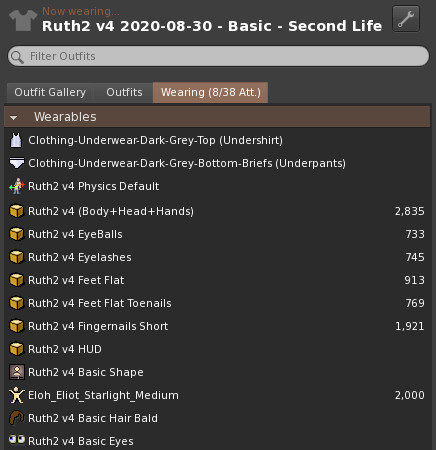 The main Ruth2 v4 mesh components have an AGPL license and other components have Creative Commons or other open source licenses. Basically, you can use and distribute the materials as you wish, but any modifications to the AGPL meshes that are distributed or made available in a service must be made publicly available at no cost and released under the same terms granted in the LICENSE.