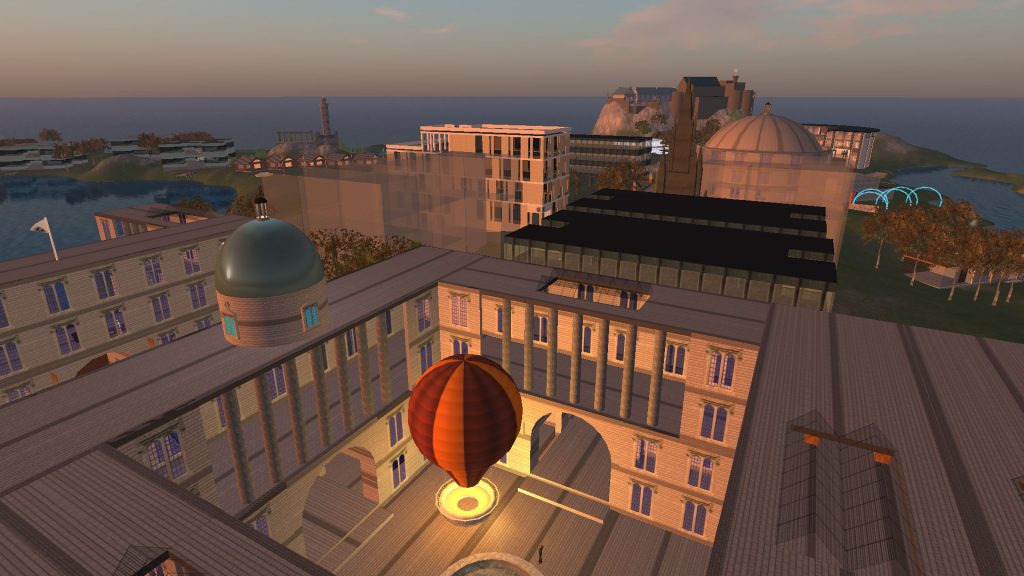 Even before Second Life began to be used across the University in 2007, groups in Business Studies, Education and Artificial Intelligence/Informatics had been exploring virtual worlds platforms for a range of collaboration, educational and research project uses. Platforms (now long gone) such as “There” and commercial virtual world simulators such as “Forterra” had been in use, and Second Life itself had been used even in its very earliest incarnation.

The following blog post indicates what Vue usage there has been of Virtual Worlds…
https://blog.inf.ed.ac.uk/atate/2018/04/27/virtual-worlds-technology-for-university-of-edinburgh/

The original Second Life Vue regions used from 2007 to 2019 are no longer maintained, but resources are available to use any available space in Second Life and a similar set of facilities are available on the OpenSimulator Platform and in some other experimental virtual worlds platforms… 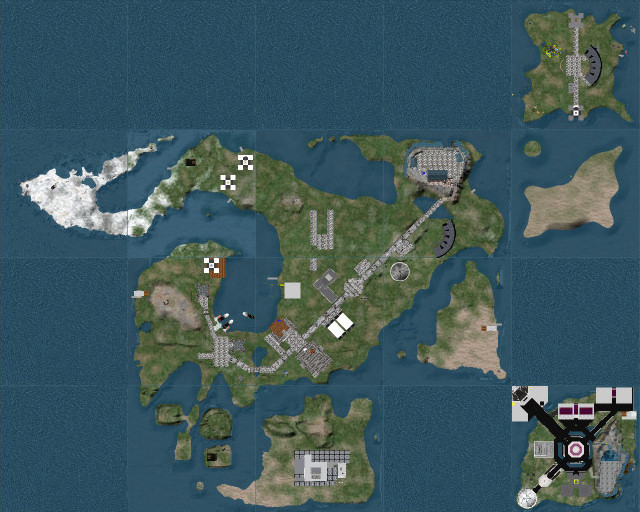 The lower right hand corner contains the “OpenVCE” (Open Virtual Collaboration Environment) region created by us and made available an an open educational resource that anyone can obtain and use in Second Life or OpenSim (see this blog post). It is also available as a selectable starter region on a range of OpenSim hosting platforms.

The rather grandly named “Vue Regional Planning Authority” (VRPA)* is a small group of people from across the University of Edinburgh who raised funds for the Second Life and OpenSim Vue regions and servers and were involved in the design and creation of the facilities. The group continues to be involved in explorations of other virtual world platforms in their own Schools, groups and across the University for the potential benefit of others. [vrpa@lists.ed.ac.uk] [Admin: https://mlist.is.ed.ac.uk/lists/admin/vrpa]

A new set of regions could be created with new region owner avatar(s) and content restored via save and load OAR (OpenSim Archive files).

Over time the databases and content for the OpenSim-based Openvue and the Vue regions added onto the openly accessible OSGrid have grown and an occasional tidy up can be be beneficial to ensure only truly accessible content and active avatar users are included and the data base size is reduced. As at July 2021 the Openvue MySQL data base when dumped to an SQL file as a backup is 18GB. There are 36 avatars included, quite a few of which are inactive.

A new OpenSim “ROBUST” grid can be set up with a new administrator and a single new region owned by the new administrator. This can become the welcome or landing region for the new grid, called temporarily Opennue. Regions can be renamed later. Further regions and active content can then be added via recreating the key content owning users (create user with previous UUID) and loading their inventories (via save and load IAR – Inventory Archive files) and then setting up the regions afresh and restoring their content (via save and load OAR). Once the new grid is established and running well, the original Openvue grid can be closed down, and then the new grid and the various new regions can be renamed to their original counterparts.

Issues for the Future

To improve security, the University of Edinburgh may not permit non-central services staff to run or manage services and applications accessible outside of the University and may require use only by internal users or those with login access via VPN to ed.ac.uk. This could mean that OpenSim Hypergrid access to external users and potential external visitors to meetings or viewing content held on OpenSim (Openvue) would not be able to gain access.

OpenSim Openvue grid and OSGrid Vue regions make use of a free vivix voice license that was offered to educators, non-profits and small grids on a free basis. Vivox is now owned by Unity and they have announced that new free licenses will not be offered. Voice is an important facility cor Vue uses of virtual worlds. An alternative may have to be found in future. Dome people have experimented with self hosted open source “Freeswitch” servers for voice.

Notes on Security for OSGrid Regions Running in ed.ac.uk

To enable discussions about the risk of running OSGrid addon regions in inf.ed.ac,uk or ed.ac.uk the following notes might be helpful.

OSGrid is the main development, testing and community hub for and provides free avatar registration for users. It is a non-commercial grid that runs on community support and donations. It allows self hosted regions to be added in a simple way. OSGrid central servers and the core databases are hosted in the USA. OSGrid allows a simple way for anyone to host their own add on regions and manage that virtual world space. Users agree to the terms and conditions of usage centrally and their details are not managed at all locally by regions. For each region one port (typically port 9000 and upwards for more than one region) has to be accessible for TCP and UDP. Local regions can set a very wide range of policies for users to their own regions, e.g., to allow access to members of specific users or groups, prevent local building. etc, and even close the region completely when needed. The default policies have safe limits on what scripts can run and are set to prevent external interaction with the underlying operating system.