This is feedback after trying for myself the recently changed new account sign up web experience after receiving comments from professional colleagues joining Second Life for the first time, and being surprised at unsuitability for their purposes for the starter avatar they were given without choice BEFORE they were logged in, were visible to others, and used the appearance and avatar selection facilities. An issue seems to be the lack now of a selection of a starter avatar closer to their purpose and preferences BEFORE entering in world, as used to be the case (see this blog post of the process in 2016). [Note added: it is possible to use an alternative ne user sign up experience provided by Firestorm Viewer team. see https://www.firestormviewer.org/join-secondlife/ ] 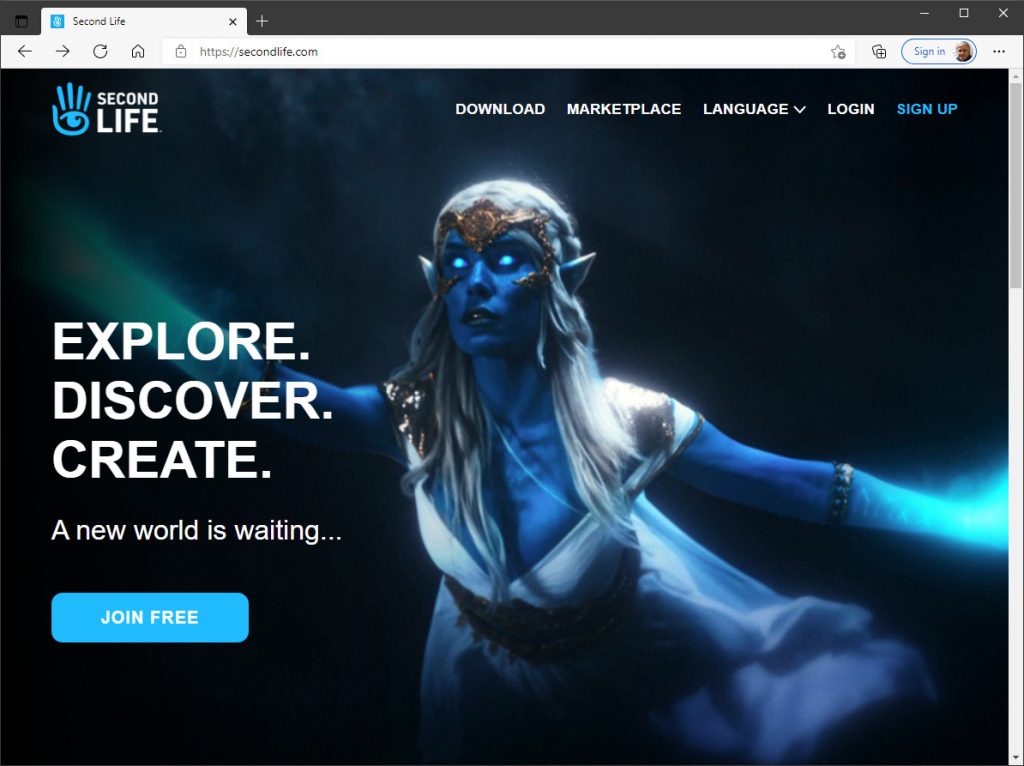 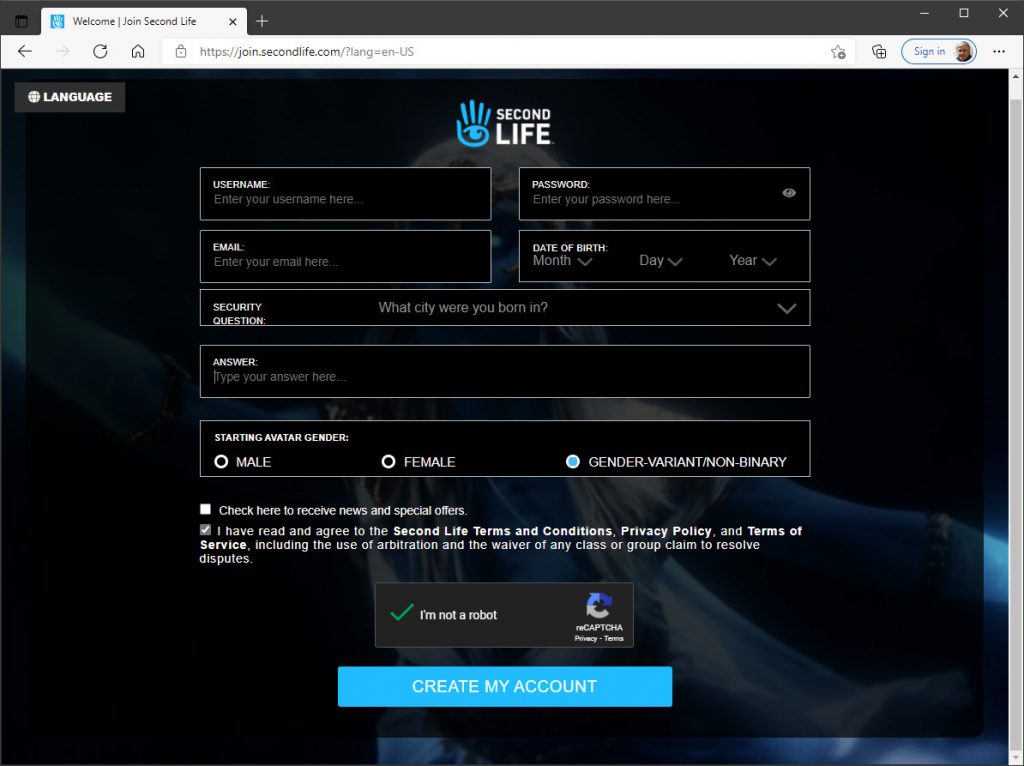 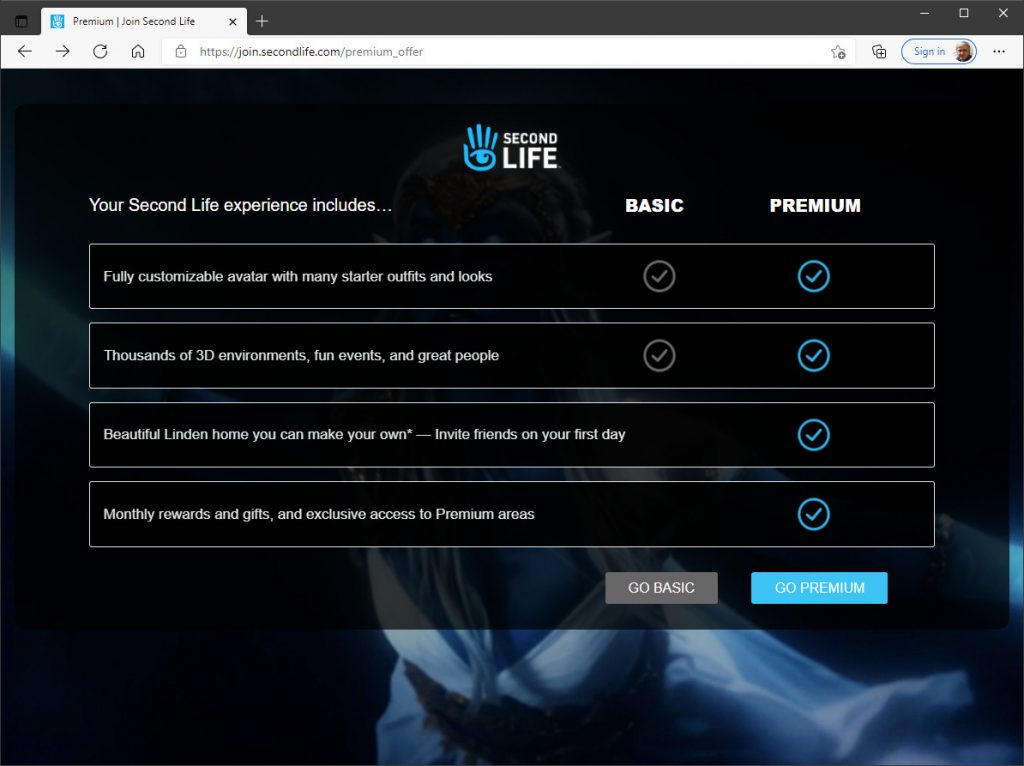 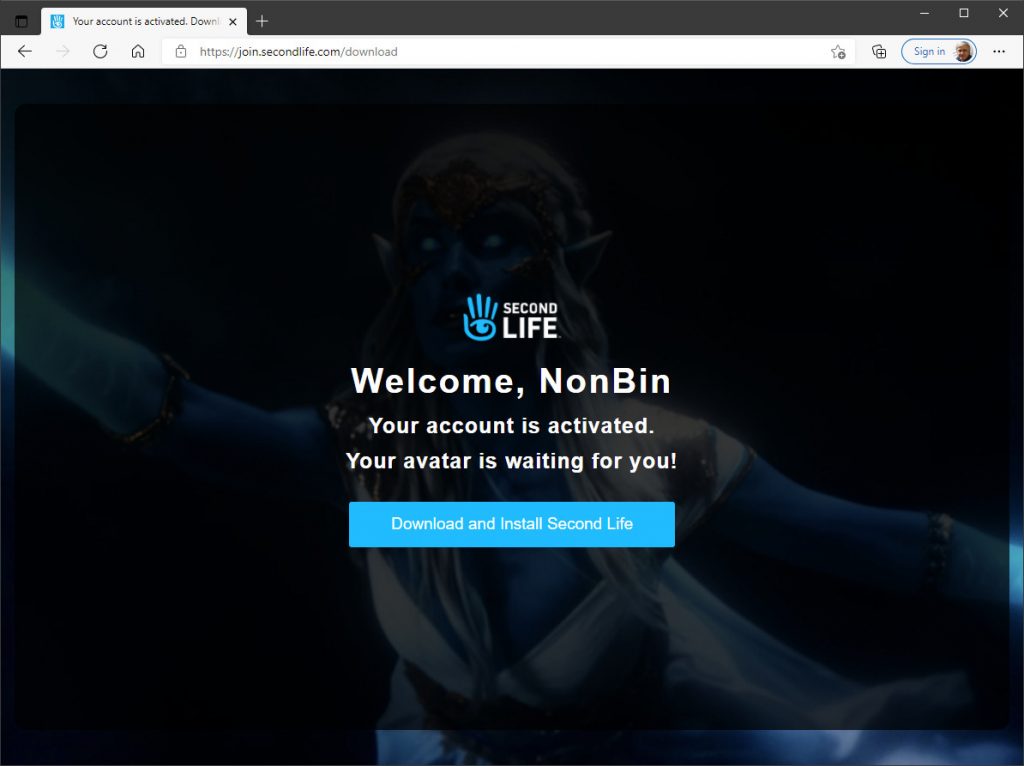 There seems to be no mention you have to go to e-mail and check that for the verification mail that is there. The viewer just says could not log you in!

Initially I could not log into the viewer the password accepted at account creation time, so thought that the password I had used must be wrong. I had remembered it correctly, as I could log in to the web account page. BUT when I came to change the password on the web it kept complaining the password was not suitable. I had to add more special characters and complexity than the instructions of a suitable password indicated before it was accepted. When that was accepted on the web page it also worked in the viewer. So there is some mismatch between viewer checks and account creation checks in terms of password complexity allowed (as at 30-Aug-2021). 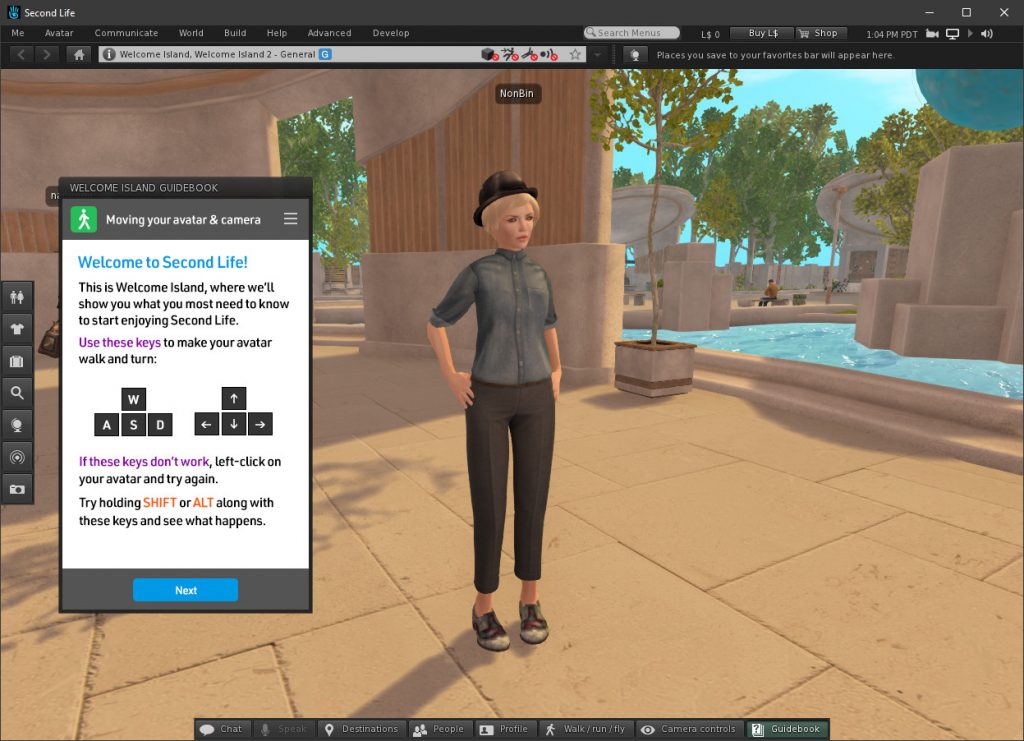 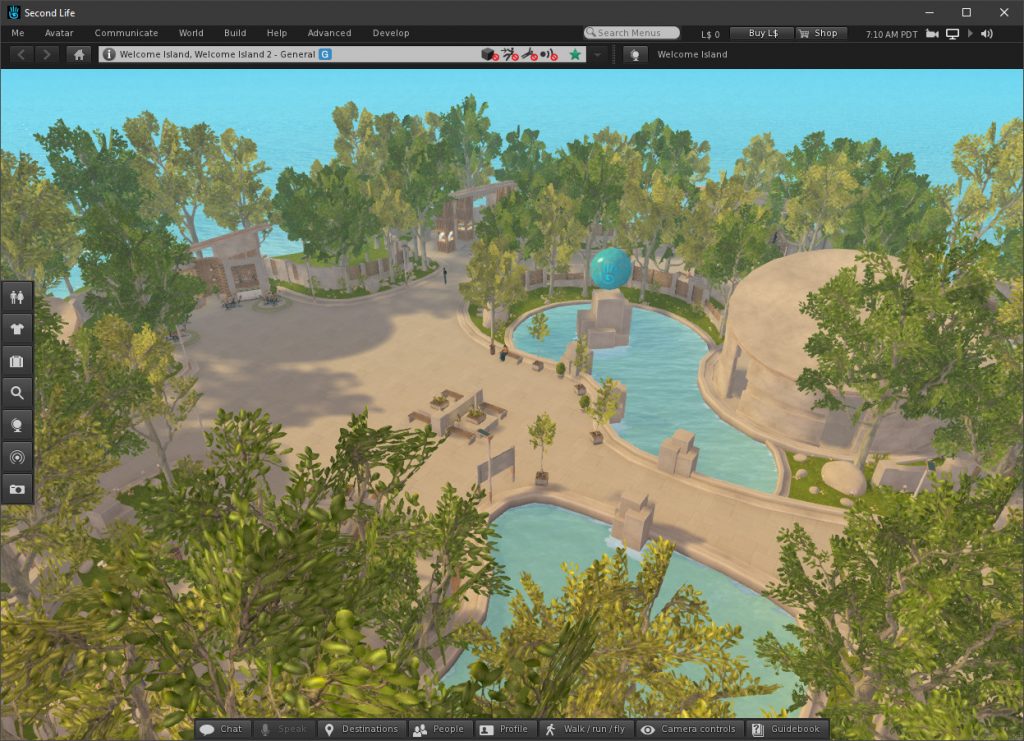 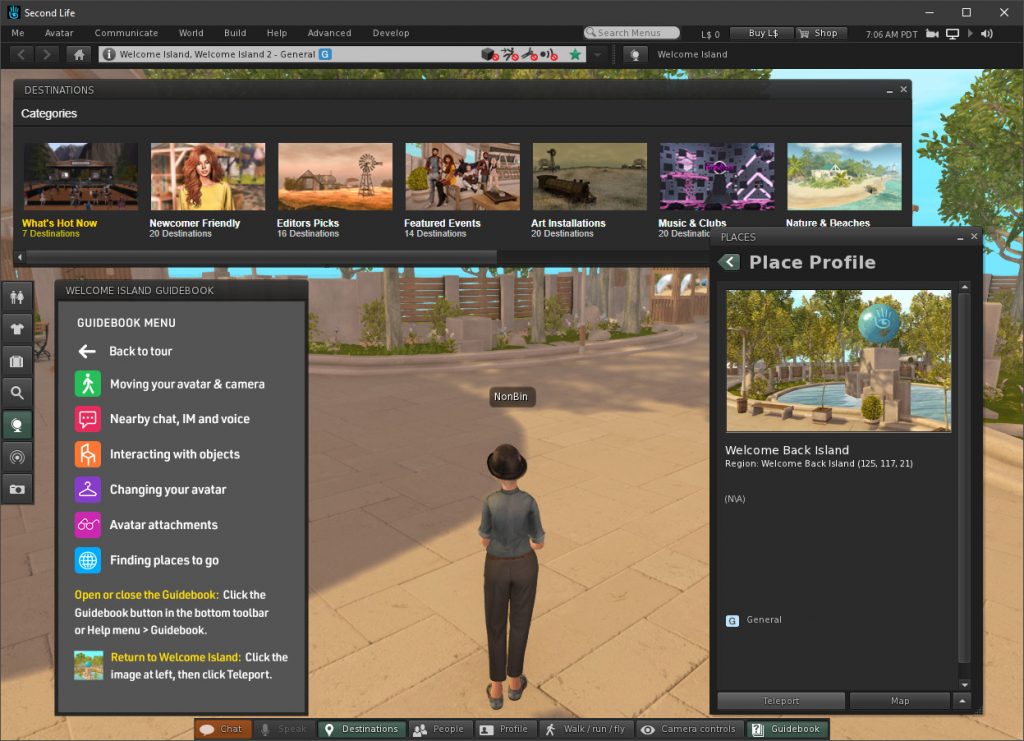 The new avatar arrives at a “Welcome Island” where a few orientation areas allow the new avatar to get used to the environment. A “Guidebook” is displayed in the viewer to walk the new user through the initial essential things of movement and interaction between objects and other avatars. the Guidebook and tutorials can be recalled at any point via a button in the viewer, and the user can return to a version of the Welcome (Back) Island – not the original one so new users are protected from hassle).

The initially allocated avatar seems to be arbitrary. Though feedback from colleagues indicates a single choice for female (shopping girl!), male (orange shirted 70’s bloke) and Chris (for no Gender/Non-binary) seem to be the avatars appearing on the starter/welcome region. I understand avatar appearance and complete avatar selection can be altered in the viewer, but a lot of users may be unhappy with the initial allocation in terms of look, shape, skin colour, etc. My colleagues say they also feel under pressure at this point as they are aware they are in a place where they are seen by others. Removing the avatar selection carousel may not suit everyone. Maybe show the initial avatar choices or a “select later in world” option at account creation time? Or fundamentally change the initial process to use a personal “changing room” space BEFORE joining any public space.

I could not see an area where Linden Lab sought feedback after I logged in with the new avatar. 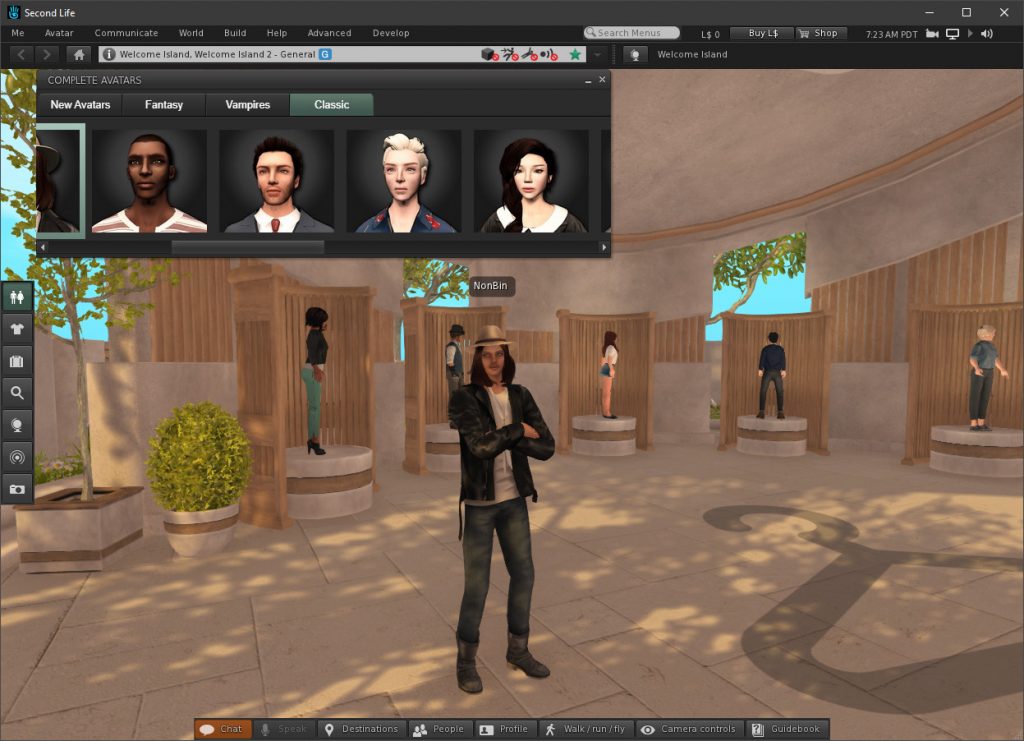 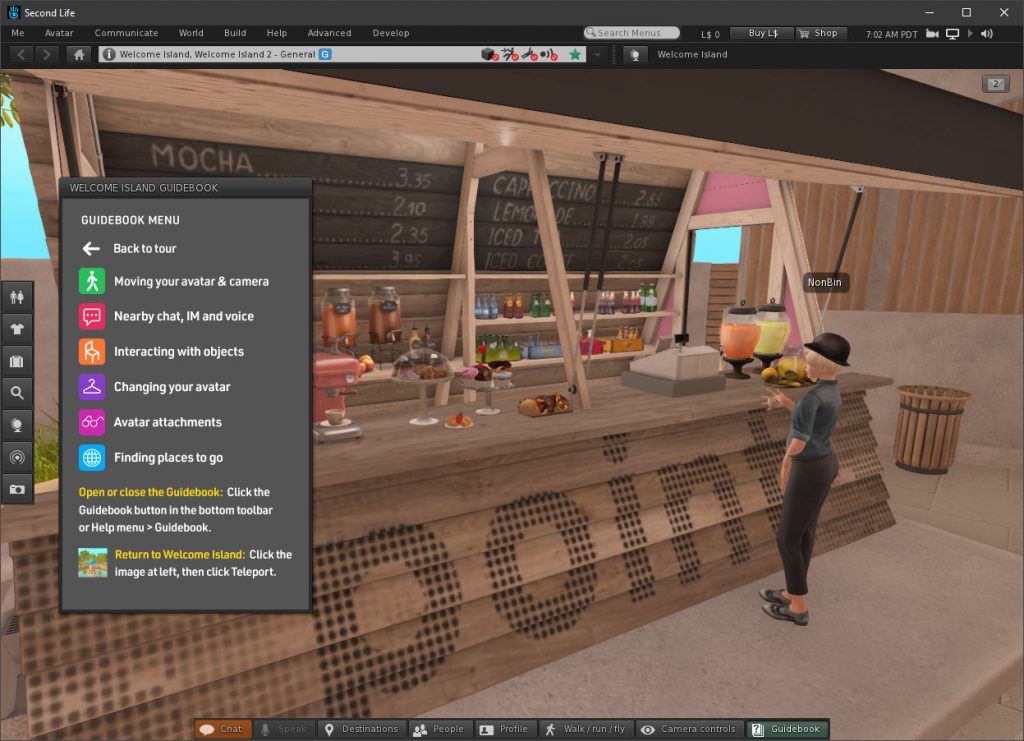 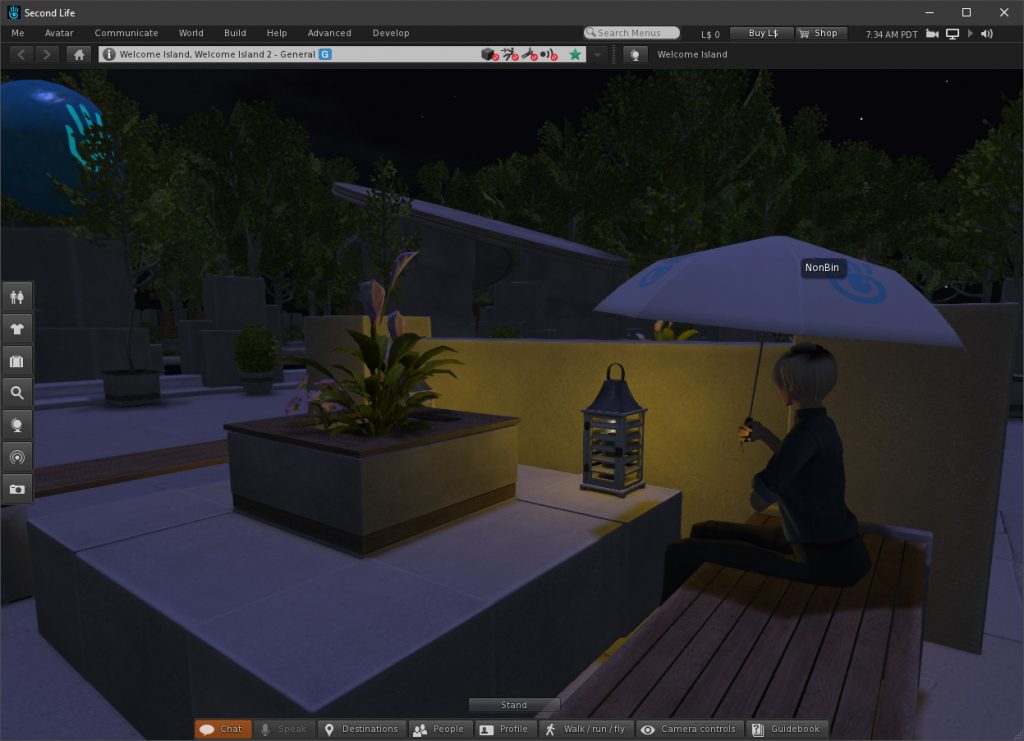 Details After Some Use

As soon as I began to obtain some of the avatar items and complete avatars, I realised that all empty folders in the inventory were not (by default) displayed. That meant when it came to amending or making a new shape the “Body Parts” folder was not visible to place these items in and to encourage organised inventory for new users from the start. This can be changed by the user, but is not obvious to new users.

It is also the case that opening group and friends tools to participate in social events is quite deeply buried. Placing these choices on the right-click context menu for the avatar (as it was for many years until recently) would be helpful.