Real-time collaborative programming describes a way of concurrent programming, where all developers in a software project can edit the source code at the same time, propagating the changes in real time. As this can be a very interesting approach for improving the collaboration between developers, it might be worth implementing such a technology into a software project in the industry. Even though there also exists an implementation of this technique for the programming language SmallTalk [1], in this blog post the Web-based collaborative Java IDE “Collabode” [2] is analysed on its usefulness in software business.

While there are a few advantages of this form of real-time collaboration in software engineering, such as improved pair-programming, the disadvantages outweigh them. As the main disadvantage is not being able to use a Version Control System (VCS) in a normal way, also the benefits of using a VCS are lost. In summary, the approach considered has too much drawbacks to use it in software business. 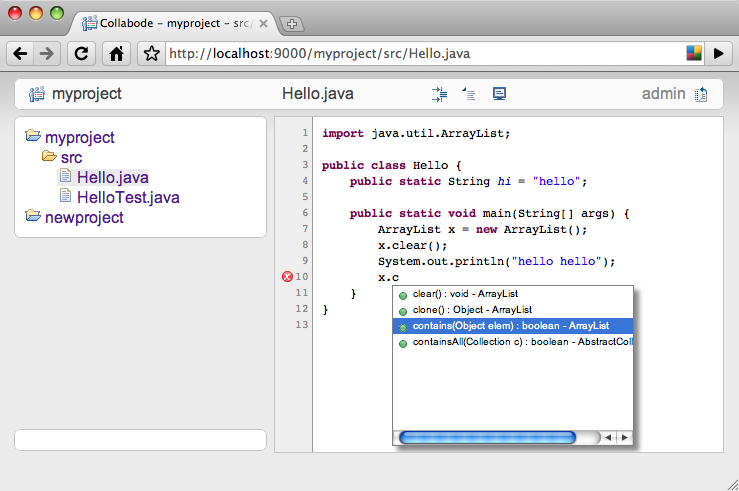 In 2011, Goldman et al published the web-based Java IDE Collabode for real time collaboration in the browser, based on Eclipse. It makes concurrent editing of the source code files for an arbitrary number of developers possible. [3] The behaviour of the system is thereby similar to Google Docs, which provides real-time concurrent document editing.

Changes in the source code are propagated to the other developers as soon as possible, but with a certain error-awareness, so that a change is propagated immediately once it does not cause compiler errors. If a change results in errors, the change is kept in a local working copy, so the engineers do not break their common build. [4]

The underlying multi-user editor is Etherpad [5]. [4] It supports simple versioning and version access of single files, but other functions of a modern VCS are not included.

According to [3], developers can benefit from using this approach in the following ways.

In addition to these points, such a collaborative system can be particularly helpful when developers are not in the same place. So Pair Programming can be achieved even if the colleagues are for example in different countries.

Furthermore, such an approach is improving the ability to teach new colleagues developing the product. As the new developer can work on his own computer while collaborating with a senior team partner, he arguably gets more involved into the learning process. Moreover, this is also more convenient for the senior developer and may therefore reduce a possible unwillingness to teach, as he is able to work from his own computer while teaching.

Finally, with Collabode a developer does not need to manually commit to a Version Control System, which saves time. [4]

However, there are several disadvantages of using this real-time collaborative programming tool:

Firstly, even though Collabode uses Eclipse as a basis, not the full Eclipse IDE is implemented in the browser-based user interface. [4] Therefore, some useful IDE features cannot be used with this approach.

Secondly, more communication is necessary between the developers. Considering the case that developer A is implementing something that uses a class that is being refactored by developer B in the same time, A might get unexplainable results. Therefore practically every developer in team must know what the others are doing at the moment. This communication overhead can lead to less efficiency.

Thirdly, the approach is not tested in large-scale projects, so there is still some research to be done here to be sure the system works in a large software project.

The main drawback of using this approach is that the normal use of a Version Control System is not possible. This section is focused on the most important reasons for using a VCS.

According to Somasundaram ( [6] ) the main advantages of using a Version Control System are the opportunity to keep different versions of the source code and the possibility to roll back to a previous state as a failsafe plan. [6]

Concerning the first point, restoring previous versions of single files is possible due to the functionalities of EtherPad. However, when changing multiple files in one change, it is not traceable that these individual changes belong to one logical union like when committing manually. It is therefore difficult to figure out a consistent state to roll back to. Furthermore, the lack of commit comments makes such an operation even more difficult. So, both main advantages of a Version Control System mentioned above cannot be used in a practical way in Collabode.

Moreover, since there are no commit comments, an important source of information is missing, for example which bug the change refers to.

Finally, this way of micro-committing everything automatically makes Continuous Integration very difficult. It is much harder to find a commit that breaks a test when there are this much uncommented commits.

While the real-time collaborative programming approach like implemented in Collabode is certainly suitable for teaching and pair programming, its usefulness in software industry is very limited. This is mainly the case because it circumvents the principles of committing to a Version Control System. If a company wants to benefit from the advantages of this new way of programming, it loses the much more important main advantages of using a normal Version Control System. Therefore I do not recommend using such an approach in a normal business software development process.

However, if a company focuses more on the improved collaboration and less on the benefits of using a VCS, using Collabode can be taken into consideration. Also a partial use of this system for training sessions in the industry can be advantageous.