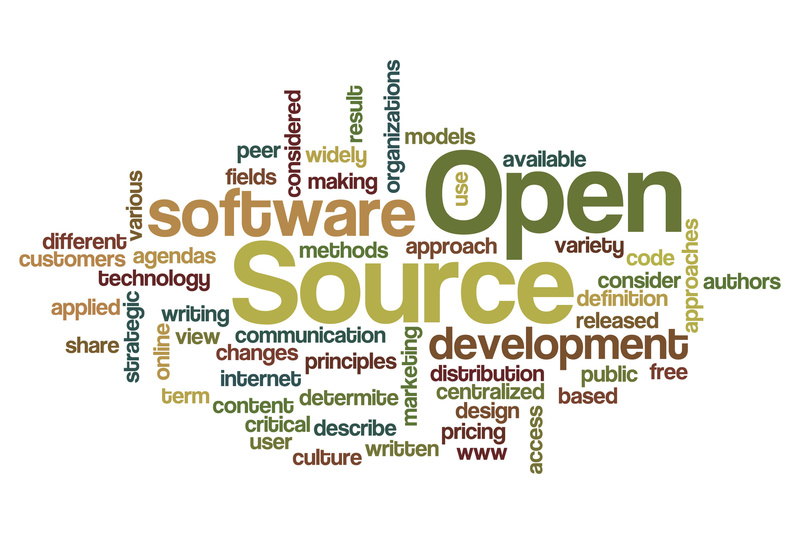 Articles of law are open. Lawyers still make a profit.

Compared with the past software market, present software companies are not only providing software as an only product, but also concentrate on the services based on their software. In other words, nowadays software industry has the same pattern with medical and food service industry, which relies on services to attract clients. Software as a service (Saas) demonstrated a development model for the software industry, which is widely accepted (Turnet, el ac, 2003). Since code of software is not the only way of profiting, the privacy of code is playing a less important role in the software business.

The successful cases of open source software are proliferated. For instance, open source operating system Linux is considered as the most suitable OS for servers.  Open source browser FireFox occupied 18.35% market share (Protalinski, 2014). As for the web server, MySQL is the most popular database system in the world, which has 11 million users in 2009, and also used by many famous websites. Apache, as an open source http service provider, has been set up on 56% website (Stone, 2002).  As a result, open source products are in a position to substitute for existing business software.  It is the successful operation of those open source project provides financial support for companies.

Why do open source software companies have a hard first step?

The development of the open source software industry meets its bottleneck at the original beginning especially in China. In my opinion, the main reasons for this situation can be concluded as following three aspects.

1.            Technical staffs firstly come into contact with open source software. They regard the code as their labour’s own result, which assumes protecting software’s copyright as a matter of course. Without the understanding of business scheme, the perspective of open source becomes a terrified and untouchable aspect of them.

2.            Company managers misunderstand the difference between open source and free software. Misleading of advertising inculcates an idea that open source equals to free upon people. The commercialized operation cannot develop healthily according to this precondition.

3.            In China, lack of relative developer causes the consequence that the local developments are hardly established.  Some business-oriented software project is even constructed based on other open source project, which disturbs the new open source development.

Actually, open source is not just a way of coding and developing, but also a remarkable business strategy. From the view of business, open source has lower cost of selling and marketing as the source is open and easy-speeded. In this part, I will illustrate some methods that open source Software Company used to make a profit according to my knowledge.

In this profit model, open source software is utilized to create and maintain the market position for the products which are able to earn money directly. For instance, open-source client software drives sales for closed source server software. Similarly, two types of software will be published, including the open source basic version and closed source advanced version.  Let us take MySQL for example, MySQL provides personal edition and enterprise edition, which use a different way of authorization (MySQL website). Open source personal edition is better for popularising as the enterprise edition plays a critical role in profit.

Technology As A Service

This model transfers an old product-oriented market into a service-oriented market. Enterprise focuses more on providing technology services rather than selling its product. The open source software is regarded as an advertising approach in this model. JBoss, a division of Red Hat, Inc., specializes in writing and supporting open-source middleware software, is the typical instance. JBoss offers their application server for totally unrestricted, but charge for technical document, technical training or secondary development.

Integration of software and hardware

This model is specifically for hardware companies. Because of the market pressures, hardware companies start developing and maintaining software, which is not the center of profit. Hence open source software is adopted.  Server provider, such as IBM, HP sell hardware server with the free Linux OS, in order to stimulate selling.

Like some free-play online games, enterprise provides open source and free software but charge for value-added functions. The emergence of plug-in software enriches the functionality of existing software in a safe and easy-developed way. Meanwhile, companies can get to make a profit from the additional component. For example, WordPress, which is the most fashionable personal blog solution provider, open its source and provide charged numerous plugins in order to maintain the operation (WordPress, 2013).  The component here is not only refers to the functional software, WordPress also offers services on the basis of personal blog, such as extra storage space, domain binding service, etc.

Advertising-supported revenue model benefits from the development of the Internet.  If open source software is supposed to obtain profit from advertising, it should be based on the Internet. Only are plenty of users using this product, which needs good quality and innovation, the commercial can be spread in a large scope. By cooperation with Google, and its remarkable user base, Mozilla gain profit, according to its open source browser Firefox (Mockus, 2002). Taking advantage of advertising-supported revenue model, the cost on developing of open source software is paid by an enterprise which server advertising instead of the underlying users.