We want to save energy, so we try to ensure that DICE computers sleep when idle. The graph below shows how many DICE desktops were asleep during each hour of a recent week. 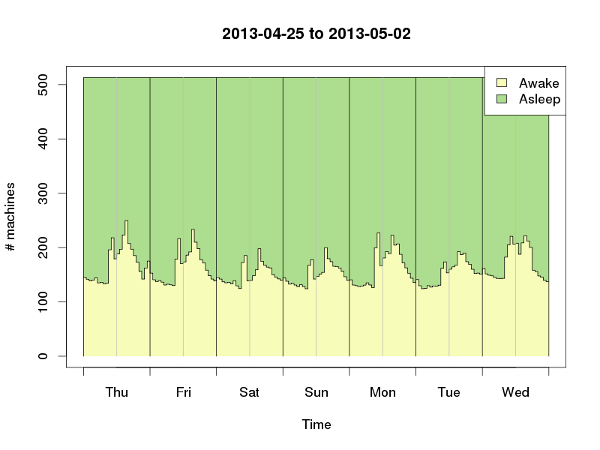 It was produced by David Sterratt, and I’d like to thank him for his work on it and for his interest in sleep and energy saving. Stephen Quinney also helped a lot with his log processing software which took so much pain out of boiling down the system log entries into this handy summary.

We hope to produce such graphs regularly, and David will be looking into what else he can mine from the sleep data (when he has time!). It’ll be interesting to see how the number of sleeping machines changes, especially next month, when we will have configured DICE machines to safely fall asleep while someone is still logged in. That’ll be covered in more depth in another blog post nearer the time.

There are a few things to bear in mind. Firstly the graph includes only those computers which slept at some point during the period. We estimate that we have about 800 active DICE desktops; 300 of them didn’t sleep during that week so didn’t appear in the graph. Secondly we know that our logs are missing a small part of their data: we’re looking at that problem. Thirdly the figures don’t separately count any machines which were switched off: they appear either in the “Awake” section or in the unsleeping 300 which don’t appear in the graph. However we don’t normally have many DICE machines switched off except at Christmas. Lastly the bars on the graph are each an average over an hour – every computer was awake at some point of every day of this period.

Chris Cooke is a Computing Officer in the School of Informatics at the University of Edinburgh. He works in the Managed Platforms Unit and rides a very large bicycle.
View all posts by Chris Cooke →
This entry was posted in Uncategorized and tagged DICE, Energy Saving, sleep. Bookmark the permalink.